10 Sichuanese Dishes You Must Try 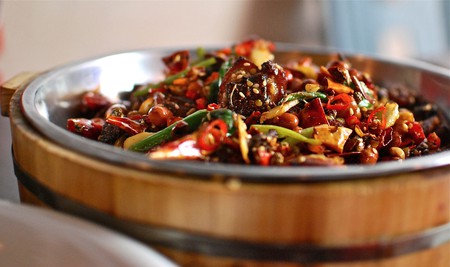 From street snacks to grand banquets, Chengdu is a place that has built a reputation for its glorious food. Sichuanese food is considered one of the eight great cuisines of China, and is unique as chefs there not only pay homage to the past, but are constantly playing with flavors for the future

The profile of dishes here are most famous for a liberal use of spicy chilies (là, 辣) and numbing Sichuan peppercorns (má, 麻), which leave the palate tingling and uplifted. However, Sichuan cuisine is so much more than spice. It boasts a depth of flavor, using lots of aromatics like ginger, green onion and garlic, several types of fresh/dried/pickled chilies, preserved vegetables, cooking wines – and everything is always balanced with just a little sugar. Chengdu, simply, is a place where everything from late night nibbles to fine dining is worth a taste. Here are 10 must-try dishes.

One of the most famous Sichuanese dishes around the world, Mapo Doufu has not only won the hearts and minds of Chinese diners around the country, but has many fans around the world. In its most perfect iteration, the dish features soft, trembling cubes of tofu that are just set in a savory red sauce made of fermented broad bean paste (Dòubàn, 豆瓣) , fermented black beans (Dòuchǐ， 豆豉) and chili paste, plus a little bit of ground pork and Sichuan numbing pepper. The name itself translates to “Pockmarked wife’s tofu,” and (it is said) harks back to a woman named Wen Qiaoqiao who lived in the late Qing Dynasty. She was the wife (po) of the pockmarked man (ma’zi) and an absolutely fantastic cook, who, legend has it, dreamed up this dish as an affordable and delicious option for the working men who frequented her restaurant. 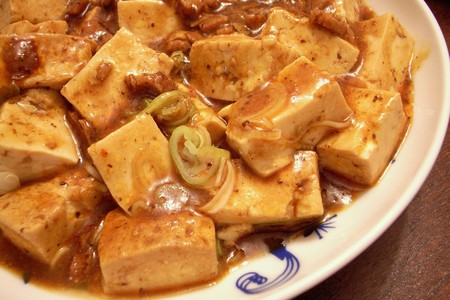 This is another dish that can be found all over China in different iterations, but the best version can be found in the city of its birth. While some renditions involve sweet sesame paste or peanut butter, Sichuanese dan dan noodles are all about the melding crisp textures and spicy flavors with soft, yielding noodles. This popular snack food features the ground pork fried at high heat with preserved vegetable (Yá cài， 芽菜), which is then topped with fried soybeans. The whole is then mixed together for the perfect pick-me-up. “Dandan” actually refers to the poles that vendors used for carrying the noodles and sauces through the street. Even today, you order noodles by the liang (liǎng，两) which equals 50 grams. Order one liang for a little pick-me-up, two for a hearty snack. 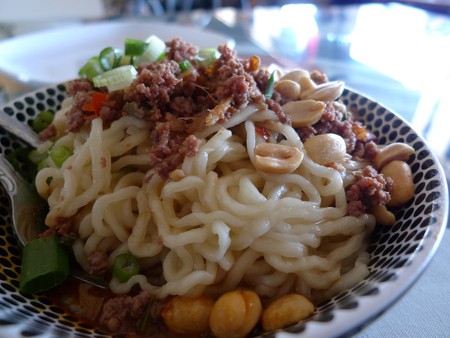 The melding of delicate, flaky fish with the strong flavors of chilies, Sichuan pepper and boiling oil is an addictive combination. In a restaurant, you’ll usually choose your fish from the menu (catfish is great), which is then filleted and marinated in rice wine and white pepper. The fish is then lightly poached, along with green vegetables and potato starch noodles, drained and placed in a large bowl with chilies, ginger, green onion, garlic slices and often, cilantro. Oil, heated to near smoking, is then poured over top. The result is deliciously fragrant and satisfying. No mystery why the dish is now served in restaurants around the country. 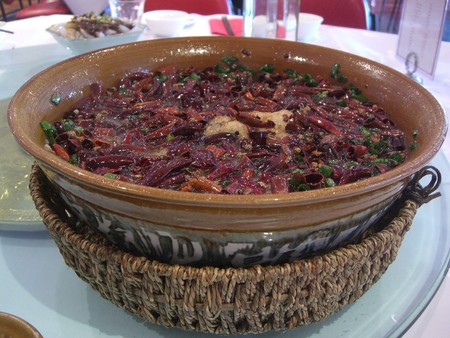 Translating to “Husband and Wife Offal Pieces,” this dish is much loved. Despite its name, lung is rarely used, though other offal is. This cold dish is made up of thinly sliced beef, stomach and tongue, doused in a moreish dressing made up of black vinegar, chili oil, Sichuan peppercorns and sesame oil. There is documentation that shows the dish being served during the late Qing Dynasty, where it was popular among students and laborers for its low cost and delicious flavor. Later, in the 1930s, a married couple in Chengdu became famous for the dish, which was so good that a merchant gave the married couple a gold plaque that read Fuqi Feipian, and the name has stuck ever since. 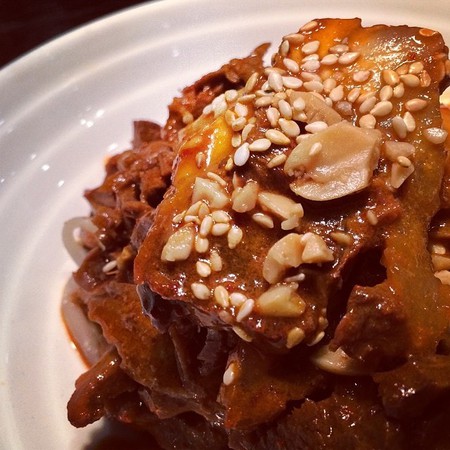 Another street snack (or breakfast) that will leave you wanting more. While wontons are originally from China’s Southeastern provinces (like Guangdong), the chefs of Chengdu have kicked them up a notch. Delicate little packages of pork are boiled in water and then served (soupless) atop a spicy, sweet and savory sauce. The difference between decent and the best wontons is the chili oil – the best vendors make their own fresh, using dried chilies fried at high heat. This is then mixed with sugar, black vinegar, fresh garlic, ginger and green onion. It’s a warming combination, and one you will want to eat every day. 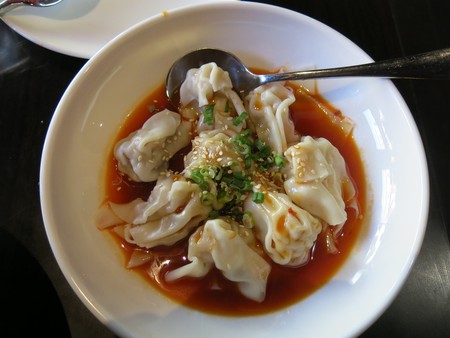 This cold dish of shredded chicken and cucumber doused in numbing, spicy chili oil is another little snack that can be found in carts around Chengdu. It gets its name from the cooking method, which involves beating the chicken with a rolling pin to tenderize and even each piece out before being shredded. The story goes back to a time when eating chicken was a luxury, very expensive, and sold by the slice – but this made the customers incredibly choosy. One particularly frugal chef discovered that by “beating the chicken” and evening out the thickness of the chicken, then shredding it, all of the chicken was then created equal. 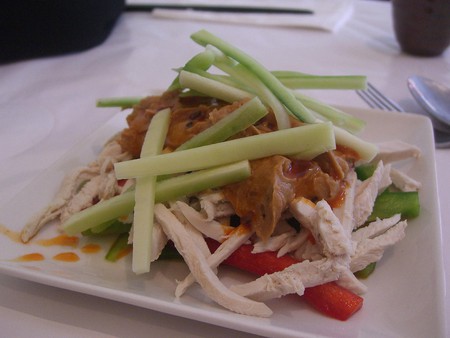 Of course, Sichuan is famous around the world for it’s mala hot pot, where you cook a variety of vegetables and meats in a fiery, fragrant vat of boiling stock and chili oil over a few hours with friends. However, the residents of Chengdu have a few other trick up their sleeve – ways to enjoy food cooked in that addictive soup/oil combo without the full hot pot commitment.

Feeling just a little peckish between meals, or after a long night drinking beer with friends? It’s Chuan Chuan Xiang to the rescue. Set up in spots around the city, these often open air restaurants feature a big vat of bubbling brew, fragrant peppers, cinnamon, anise and cloves. You’ll find single people, couples and large, boisterous groups of strangers pulling skewers of meat and veggies and dipping them into the pot. You’re charged by the skewer, which they count at the end. For a more solitary hot pot experience, try out maocai. Here, you’ll find racks of vegetables, noodles, meats and more which you put into a basket. The restaurateur will count your booty, and then cook it all together in another numbing, spicy pot of soup and hand it over for your personal delight. Perfect for one of those cool, damp evenings to chase away the chill. 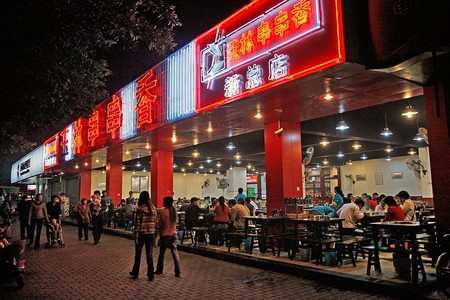 This classic Sichuanese dish does not actually involve any creepy crawlies, but draws its name from the ground pork which clings to the bean thread noodles. It’s a homey dish, made with little spice, but lots of comfort. As legend goes, the story draws its name from a particularly filial daughter who was taking care of her gravely sick mother. They were short on money, but the thrifty daughter still wanted to cook her something delicious, so she bought a tiny portion of ground pork to fry with the noodles. The mother deemed that the pork looked like ants, and so the name of this satisfying dish was born. Perfect if you’re looking for a break from all of the spice. 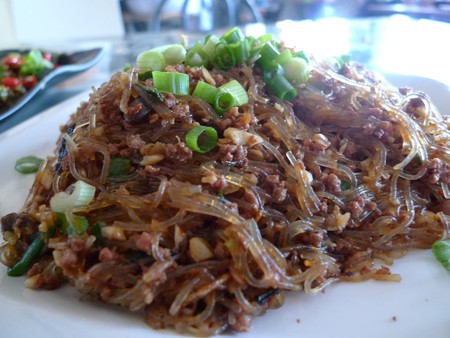 Ants on the Tree | © Ron Dollete/Flickr

Rabbit is so popular on the tables of Sichuan that nearly all of the rabbit produced in China (and most of the rabbit heads from France) make their way into the stomachs of Chengdu residents. If stewed rabbit heads, another popular Chengdu snack, seem a little intimidating, go for this delicious dish made of diced rabbit fried with fermented black soybean paste, fermented black beans, leeks, peanuts and of course, lots of chilies. Invented in the 80s by a Chengdu chef known as “Younger Sister,” this is a new way of experiencing sweet, gamey rabbit meat. Just watch out for the bones!