The world is full of wonders, many of which you may not know exist until you stumble upon them. These 10 places should inspire any curious wanderer to venture into the beauty of the world’s lesser-known corners. 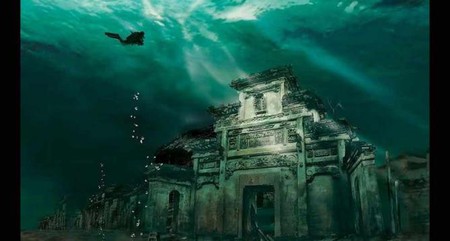 Shi Cheng was once the center of politics and economics in China’s eastern province of Zhejiang. In order to build the hydroelectric power station in 1959, the city was covered in water and was largely forgotten, leaving a maze of white temples, memorial arches, paved roads, and houses – all hidden 130 feet underwater. Protected from wind, rain, and sun, the entire city has been branded a ‘time capsule’, as almost every structure remains completely intact, including wooden beams and stairs. Now, divers want to use the metropolis as a tourist site. Qui Feng, a local tourism official, has suggested using Shi Cheng as a destination for diving clubs. 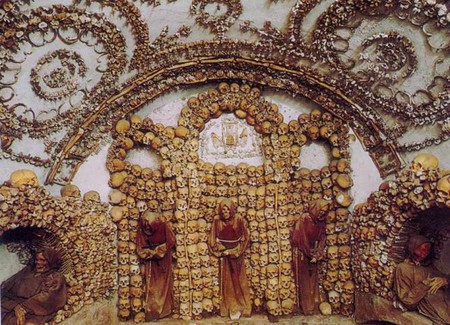 Located beneath the church of Santa Maria della Concezione, the Capuchin Crypt is not for the faint-hearted. It holds the bones of about 4,000 dead Capuchin monks. However, the crypt is strangely beautiful and touching. A sign proclaims ‘What you are, we once were. What we are, you someday will be.’ The bones are arranged in patterns: cross, floral, arch, triangle. A large clock is composed of vertebrae, foot bones, and finger bones. The single hour hand represents the idea that time has no beginning or end. 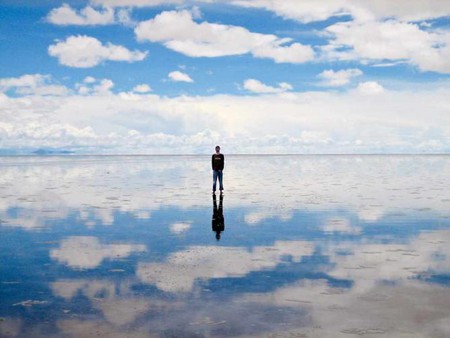 The Salar Covered With Water | © Chechevere/WikiCommons

This unforgettable Bolivian landscape is the world’s largest salt flats, sitting at a lofty 3,653 meters and blanketing an amazing 12,000 spare kilometers. It was part of a prehistoric salt lake, Lago Minchin, which once covered most of southwest Bolivia. The stunning beauty of this vast salt desert makes it one of South America’s most awe-inspiring spectacles. The landscape is entirely flat. Unlike traditional deserts, which have sand in abundance, the Salar de Uyuni features vast expanses of glistening white salt. 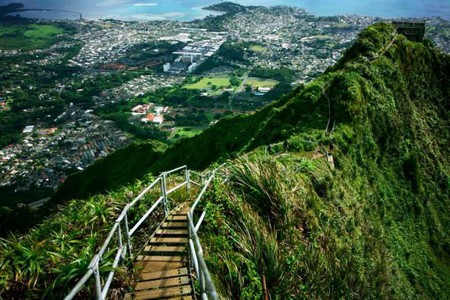 Also known as the ‘Haiku Stairs,’ the Stairway to Heaven is one of the most popular of Oahu’s ‘forbidden’ trails. It was originally built for the U.S. Coast Guard to allow access to the LORAN radio antenna on the top of the mountain. Amid the lush Koolau mountain range, the 3,922 steps lead up to the stunning Puu Keahiakahoe summit. However, the hike itself is illegal, as the navigation station has been closed since the 1980s, resulting in the Stairway being off-limits. This minor hurdle hasn’t stopped elusive hikers and ambitious Instagrammers though, who risk it all for the stunning and rewarding views. 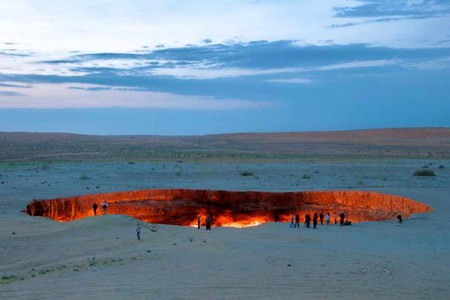 The Door to Hell | © Stefan Schinning/Flickr

The Door to Hell, Turkmenistan

‘The Door to Hell,’ a vast molten cavity known as the Darvaza crater, opened up 40 years ago in the desert of north Turkmenistan and has been burning ever since. Its origin is disputed, but the most widely accepted theory is that the borehole was set alight in 1971 after fears it was emitting poisonous gases. Scientists decided that the most efficient way to solve the problem would be to burn off the poisonous gases. It was expected that all of the gas in the crater would be burnt off within days. Four decades later, the crater is still ablaze and has burned at temperatures of 1,000 degrees celsius. 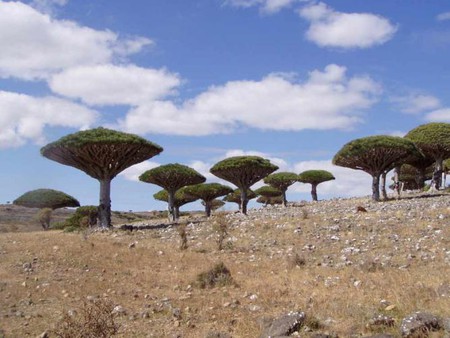 The unusual landscape of Yemen’s Socotra Island resembles something from a sci-fi film. The remote island off the coast of Africa is home to around 800 rare species of flora and fauna. About a third of these are found nowhere else on the planet. The island’s harsh and dry environment leads to the distinctive appearance of its other-worldly plants. The blown-out umbrella shaped dragon’s blood tree has come to symbolize Socotra; its distinctive shape is even depicted on Yemen’s 20-rial coin. The wide sandy beaches rise to limestone plateaus full of caves (seven kilometers in length) and mountains up to 1,525 meters high. Despite the fact that this island has 40,000 inhabitants, the Yemeni government put in the first roads just two years ago. This was after negotiations with UNESCO, which has declared the island a World Natural Heritage Site. 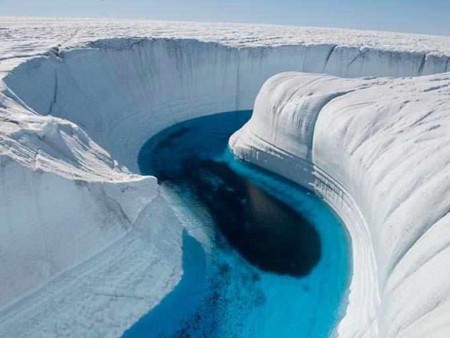 This epic canyon in Greenland was only recently discovered, having been hiding under a mile of ice. It has characteristics of a winding river channel and is at least 460 miles long, making it longer than the Grand Canyon. It was discovered by accident as scientists researching climate change mapped Greenland’s bedrock by radar. Humans, not existing four million years ago, had never seen the canyon before. If the Greenland ice sheet melts completely it will raise the global sea level by seven meters and swamp major cities, so this is one great geographical feature that hopefully won’t become a tourist destination. 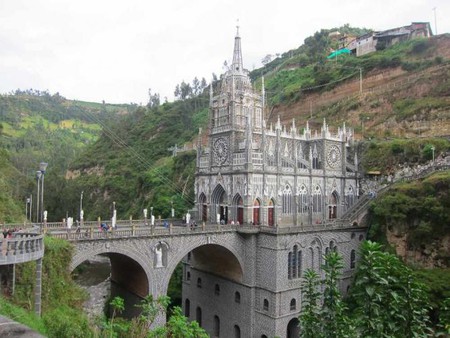 Just outside the town of Ipiales, lies the stunning Santuario de las Lajas, or Las Lajas Cathedral. The neo-Gothic church was built on the bridge spanning the river gorge between 1916-1944. It was built in such a way that the gorge cliff with the image of the Virgin forms the back wall of the church. The sanctuary is practically hanging over the abyss, and this is one reason it is considered the most beautiful church in Colombia. Some even say that this Roman Catholic basilica is one of the most outstanding architectural monuments in the world. It took 33 years to finish the present church; the result seems to transport visitors to another world. 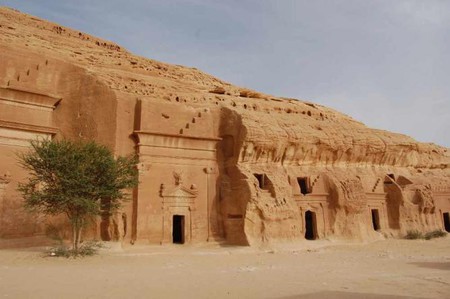 The archaeological Site of Al-Hijir (Mada’in Salih) is the largest conserved site of the Nabataeans south of Petra in Jordan. The World Heritage property features well-preserved monumental tombs with decorated facades dating from the 1st century BC to the 1st century AD. The site features some 50 inscriptions of the pre-Nabataean period and some cave drawings. It is an outstanding example of the Nabataeans’ architectural accomplishments and hydraulic expertise. The delicate details of the entrance portals and the smooth surfaces of its 111 tomb facades reflect the great skills of the masons of their time. The most photogenic and most iconic symbol of Mada’in Saleh is Qasr al-Farid, a single tomb carved into a small dome that stands alone in the open. The facade was never finished, so the heavily chiseled surface of the lower third documents how the tombs were fashioned from the top down. 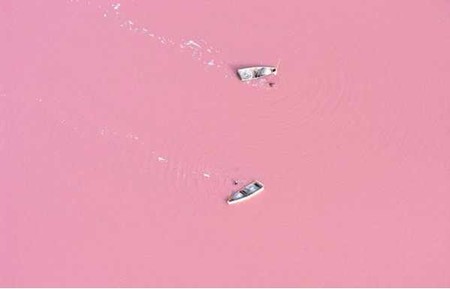 Less than an hour away from Senegal’s capital city lies the unusual Lake Retba, which captures the unsuspecting visitor’s eye due to its unusual, vivid pink color. The distinct rose hue is caused by the Dunaliella salina bacteria, which is attracted by the lake’s high salt content. The bacteria produces a red pigment in order to absorb the sunlight, thus giving the lake its unique hue. Its color is especially visible during the dry season, which lasts from November to June. Not many living organisms are able to survive in Lake Retba because of its high salt content, so it serves mainly as a tourist destination and source of salt production.