Dubbed Cambodia’s artistic hub, the contemporary arts scene is thriving in the northwestern city of Battambang.

Historically, Battambang has a reputation for spawning a number of the country’s artistic greats in the form of artists, musicians and intellectuals, including 1960s singer Ros Sereysoth and S-21 survivor and artist Vann Nath.

During the Khmer Rouge reign from 1975 to 1979, an estimated 90% of the country’s artists were killed or had fled. However, almost four decades on and the arts scene is flourishing once again, coming as no surprise that at the heart of this movement remains the creative capital of Battambang (pronounced Battambong).

Despite being Cambodia’s second largest city, Battambang resembles more of a sleepy town, where the pace of life is laid back and time almost seems to stand still. With a grid network of small lanes and streets steering away from the central point, which is a market, a day can easily be spent exploring and discovering artists’ studios, small galleries, street art, and bars and restaurants showcasing work.

School
As one of the main driving forces behind Battambang’s creative revival, Phare Ponleu Selpak is home to Cambodia’s renowned circus, as well as an arts school for underprivileged youngsters. A gallery showcasing the next generation of artists’ work can be viewed, with pieces up for sale, prior to a highly recommended visit to the circus. If you find yourself in Siem Reap, be sure to attend one of the daily shows there. Proceeds from these events are reinvested back into Phare’s operations.
More Info
Open In Google Maps
Phum Anh'Chanh, Battambang Province, Cambodia
+85577554413
View menu
Visit website
Visit Facebook page
Send an Email
Give us feedback

Romcheik5 is a great example of how creativity is blooming in Battambang. Opened in 2012 by four young Cambodian artists, the venue across the Sangkae River started life as a small set of workshops and studios. Since then, it has expanded and now houses rotating exhibitions by local contemporary artists downstairs, with the permanent exhibit, Made in Battambang, housed upstairs. This showcases the work of 25 Battambang-based artists, highlighting the talent brewing in the Kingdom. Romcheik5 also hosts various workshops throughout the year. 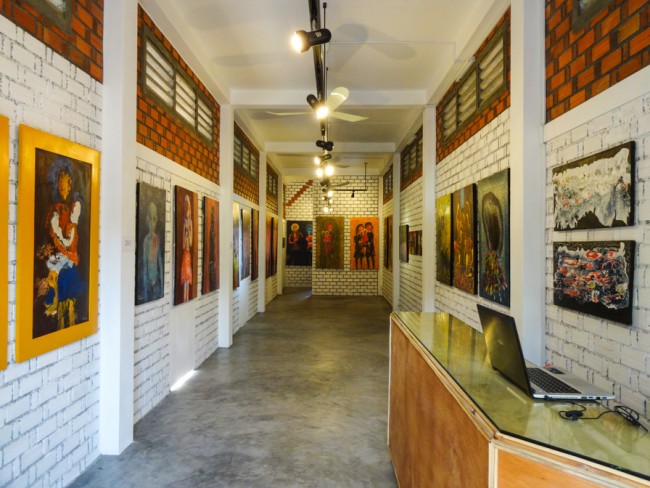 Since September 2011, Make Maek has been championing the local art scene. The small gallery, founded by Khmer-American artist Kat Eng and Cambodian artists Mao Soviet and Phin Sophorn, aims to provide a space for the city’s arts scene to thrive, as well as experiment with new skills and techniques. It specializes in bringing together local and international artists. Since opening its doors, it has aimed to host eight mixed exhibitions a year.

Opened in 2014, Sangker Art Space and Gallery provides a platform for local artists to come together, get creative and showcase those results. With a consistently changing series of exhibitions, expect to see inspiring work from a various established artists, as well as rising stars. Visitors can also meet some of the artists working in their studios, who will happily talk about their craft and the pieces they are creating. 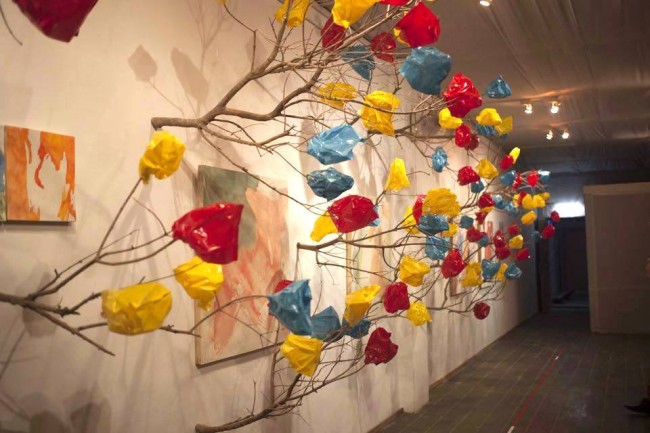 Indulge in two pleasures—chocolate and art—with a visit to Choco l’Art Café. Serving up the city’s best chocolate, featuring a range of delicious desserts, the venue also doubles up as a gallery. The brainchild of Pra Ke, one of the founders of Phare, his powerful work adorns the walls, as well as a number of other local artists.

Hotel
Bric-a-Brac is full of quirky pieces | © Bric-a-Brac
Acting as a living, breathing gallery, this stylish three-room hotel also serves as a boutique and showroom, making Bric-a-Brac a welcome addition to Battambang. The brainchild of tassel maker Morrison Polkinghorne, the store showcases a range of detailed weavings from across the region, as well as antiques and modern textiles. Visitors can also watch tassels and fabrics being created by hand, as well as take part in a range of workshops, such as design.
More Info
Open In Google Maps
112 Road No 2, Krong Battambang, Battambang Province, Cambodia
+85577531549
View menu
Visit website
Visit Facebook page
Send an Email
Give us feedback