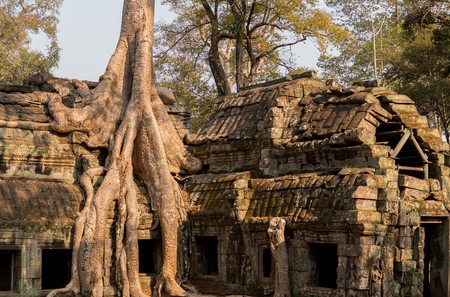 Dubbed the Tomb Raider temple because it provided the mystical backdrop for the 2001 Hollywood hit starring Angelina Jolie, root-riddled Ta Prohm continues to capture the imagination of tourists.

Ta Prohm was catapulted onto the international stage when scenes of the ancient city engulfed by the jungle were screened across the world in Lara Croft: Tomb Raider.

This cemented the temple’s status as an iconic tourist attraction and helped lure millions more visitors to Cambodia, desperate to stand beneath “the tree” made iconic by Angelina Jolie in the movie after snapping the sunrise at Angkor Wat.

While nearby Angkor Wat may well remain the king of Angkor Archaeological Park, Ta Prohm deservedly sits in the top three – alongside Angkor and Bayon – and by far wears the crown of being the most atmospheric.

Constructed in 1186 as one of the first buildings in Jayavarman VII’s grand vision of creating a network of public buildings and structures, Ta Prohm was originally named Rajavihara – monastery of the king – and served as Mahayana Buddhist monastery and university.

Jayavarman VII – who completed Angkor Wat, which was started by Suryavarman II – dedicated the sacred site to his family, with evidence of this found in inscriptions on the temples’ stele. For example, Ta Prohm’s main image represents Prajnaparamita – the personification of wisdom in Mahayana Buddhism – was modelled on the King’s mother. 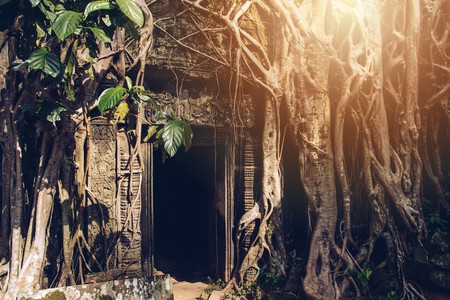 The stele records also reveal Ta Prohm was home to more than 12,500 people, including 18 high priests and 615 dancers. More than 800,000 people living in surrounding villages provided services and supplies to the temple, which was home to a bounty of treasures that took in gold, pearls and silks.

It also notes there were 102 hospitals in the Kingdom at that time.

After the fall of the Khmer Empire in the 15th century, Ta Prohm was abandoned and left to let nature take her course for centuries. When restoration of the temples started in the early 21st century, then under the direction of the French, experts decided to leave the enchanting, root-entangled temple as it was – swallowed by the jungle.

Extensive conservation and restoration works have taken place in recent years, with wooden walkways and hand rails installed. This makes navigating the temple much easier, while also serving to protect the crumbling ruins from inconsiderate tourists who climb atop the ageing stones to snap selfies.

Ta Prohm sits on Angkor’s small circuit, which is the usual route of one-day Angkor Archaeological Park pass holders. Most start at Angkor Wat for sunrise before heading to Angkor Thom, which includes Bayon temple, then Ta Prohm. 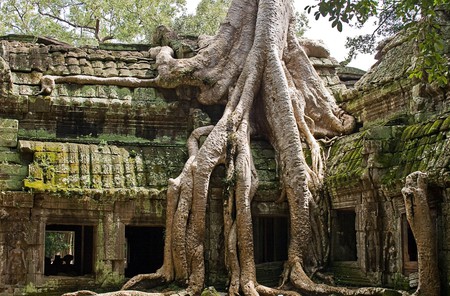 Located about five to 10 minutes away from Angkor Wat or Bayon temple by tuk tuk, a car park sits at the entrance to a short path that cuts through the jungle Ta Prohm calls home. The site is made up of a series of one-storey buildings that sit inside a crumbling, rectangular 600m x 1,000m wall.

Most visitors enter Ta Prohm from the west gate, where a stone terrace acts as a walkway across a narrow moat. From here, guests enter the site, which is made up of courtyards, towers and passageways – with many off limits due to their ill state of repair.

The Tomb Raider tree can be found in the central sanctuary. This is where Jolie’s Lara Croft picked a jasmine flower in the iconic scene – expect to also find a snaking queue of people waiting to be photographed in front of it.

Ta Prohm is usually left to last on the small circuit, meaning the mass of visitors tend to flock there at the same time. This means the narrow walkways and corridors inside Ta Prohm can get crowded and frustrating to navigate. 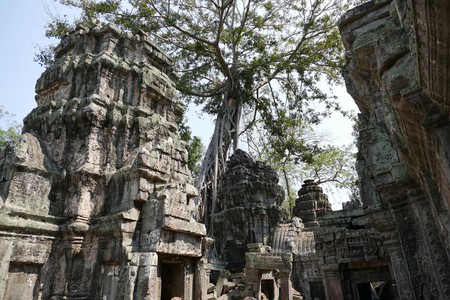 While we know sunrise at Angkor Wat is pretty special, the mounting crowds are increasingly taking away from the experience. If you don’t mind missing out, then shake it up and swop sunrise at Angkor for Ta Prohm and you’ll have the temple pretty much all to yourself.

Alternatively, enjoy sunrise at Angkor Wat but leave the exploring for later on in the day. Once the sun has risen, the majority of tourists spend the next few hours exploring the expansive site. Instead, head back to your transport and hit Ta Prohm way ahead of the crowds.

What about the dinosaur?

Yes, you read that right. Ta Prohm is home to a mysterious stone carving of what appears to be a stegosaurus. The carving has triggered a flurry of debate over whether it is a hoax – I mean what would Angkorian artisans be doing drawing dinosaurs in the 12th century, right? See if you can find it and see for yourself.