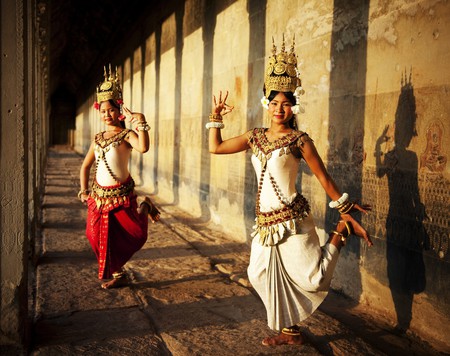 Cambodia is a country that is steeped in history and tradition, with classical Cambodian ballet — or Apsara dancing — held in high esteem across the country. Evidence of this delicate form of dancing can be seen etched into the walls of ancient temples, as well as when watching the string of talented dancers who put on shows across the country today. Here’s the lowdown on Apsara’s origins and the best spots to watch this type of dancing.

Stretching back to the 7th century, Apsara dancing stems from Cambodia’s Hindu and Buddhist mythology. Evidence that the dance form existed as early as the 7th century can be seen in carvings at Sambor Prei Kuk temples in Kampong Thom province, where the ethereal beings — Apsaras — have been immortalised in stone.

In line with Hindu mythology, Apsaras are beautiful female creatures that visit Earth from heaven to entertain both gods and kings with their enchanting dance. Legend says the beautiful beings were born from the Churning of the Ocean of Milk, also referred to as Samudra manthan in Hindi or Ko Samut Teuk Dos in Khmer. The story is depicted on a 49-metre bas-relief, carved on the walls of Angkor Wat. 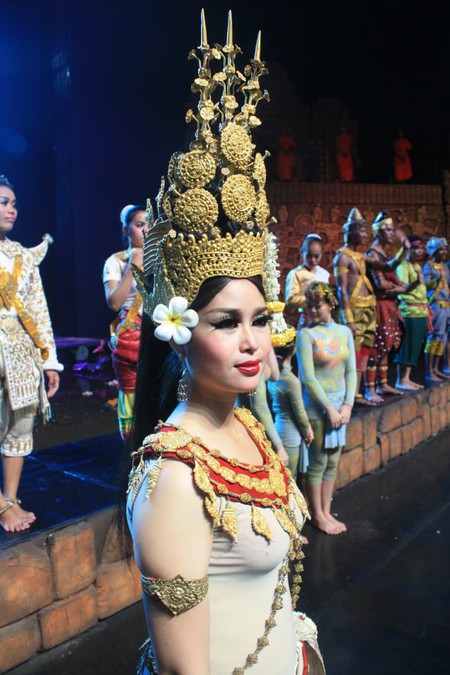 Believed to be the wives of Gandharvas — servants at the palace of Indra, the King of Gods — the nymphs protected the King of Gods by seducing mortals who were seen as threats with their beauty. Their powers were incredible. Mortals and divinities could not resist the celestial dancers’ charm.

A belief in the female spirit of the clouds and water was so entrenched in Khmer culture that King Jayavarman VII, who was behind the Ta Prohm and Bayon temples, is believed to have had more than 3,000 Apsara dancers in his court.

What Is Apsara Dancing?

Since the spirits are meant to entrap mortals with their beauty, the dance moves reflect this idea and include slow-paced, mesmerising moves that hypnotize audiences.

The main traits of the dance are the hand gestures, and more than 1,500 exist. Each movement of the fingers has its own distinct meaning, from worshiping the spirits of nature by depicting a flower in bloom to referencing one of the hundreds of Buddhist and Hindu legends.

The jeeb — a hand position that is defined by pressing the thumb and forefinger together and fanning the remaining fingers out — carries many different meanings, including shyness, laughter, love and sorrow. The dance has become so iconic with Khmer culture that in 2008, it was placed on UNESCO’s Representative List of the Intangible Cultural Heritage of Humanity.

The dance is so complex that girls start training from a young age to ensure they gain the flexibility that is needed in their hands and feet to carry out the graceful and intricate moves, which make it look like the women are floating on clouds.

Apsaras are identified by their elaborate costume, which is comprised of elegant silk clothing, stunning jewelled headdresses and precious necklaces, earrings, bracelets and anklets.

During the deadly Khmer Rouge reign from 1975–1979, 90 percent of the country’s artists were killed. This massacre included Apsara dancers, and the art form was almost wiped out by the Pol Pot-led regime. Thankfully, a few dancers survived and were able to pass on their knowledge to younger generations, breathing new life into the ancient art form. 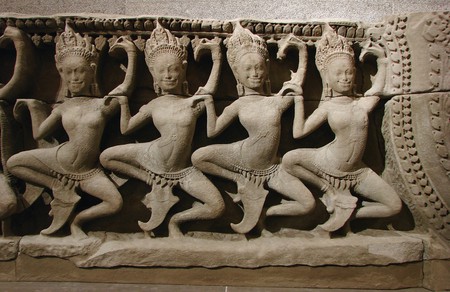 Apsara dancers can be seen carved into walls | © Vassil/WikiCommons

Princess Buppha Devi, daughter to King-Father Norodom Sihanouk, played an instrumental role in rekindling the dance. She had been a classical dancer in the 1950s and 60s, performing on home turf as well as across the globe. She is currently the director of the Royal Ballet of Cambodia.

The tradition has also inspired a string of contemporary versions, with Sophiline Cheam Shapiro championing the traditional dance, while modernising it to fit in with the 21st century. The troupe perform across the world, with several performances put on in Cambodia.

Cambodian Living Arts also puts on daily evening shows at the National Museum in Phnom Penh, which takes in a range of traditional arts, including Cambodian ballet. There are also a host of venues in Siem Reap that hold performances and offer dining, including Angkor Village Apsara Theatre and La Résidence d’Angkor.