The ascent of the Khmer film industry following independence from French protectorate rule was abruptly ended in 1973 as the country fell under Khmer Rouge rule. Since the downfall of the regime in 1979, documentary film-making has made an inestimable contribution to the revival of this industry. 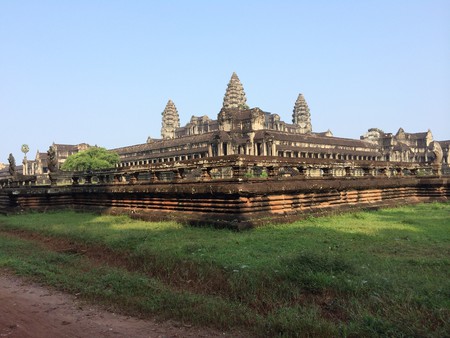 The hero of Rithy Panh’s One Evening after the War (Un Soir Après la Guerre), Savannah, returns from the fighting in the jungles, meets his remaining family and makes his way to the cinema, where he cannot afford a ticket. As well as highlighting the returning soldier’s financial concerns (which cost him pain throughout), Rithy concisely articulates the former popularity of pre-war pastime of cinema-going and the post-war recovery of the film industry.

From the 1960s until the Khmer Rouge regime’s rise to power in 1974, Khmer film experienced a ‘golden era’. Although directors were reliant on rentals and donations from foreign organisations, the film industry was able to grow rapidly with technical developments and creative enthusiasm for the medium.

Almost 400 films were produced in that time, with the endorsement of the reigning king, Norodom Sihanouk; a prolific filmmaker himself, with a total of 46 titles released under his name. There were more than 30 cinemas in Phnom Penh, which were left to ruin following the emptying of the city by the Khmer Rouge and subsequent settling into the large covered buildings by returning refugees.

Like the cinemas, only elements of the pre-war films survived the war. Songs, a few stars’ names, and the now retro portrait-painting techniques used on film-posters which are now re-worked by modern studios and sign-painters in the city. The first film made and released in Cambodia after the regime’s downfall in 1979 was a horror film based on Khmer folklore. The horror genre still retains a stronghold on popular film in Cambodia and continues to reuse old narrative and production techniques.

Away from the larger cinema-complexes, which prefer profit-making, CGI-heavy, Hollywood films and Khmer horror to experimental cinema, is a nascent local industry of documentary-making, encouraged by small-yet-influential organisations such as Bophana and the larger, international film community. Since Khmer filmmakers appear to be pouring their creative energies into documentary film, the time seems ripe to feature the best of their efforts.

Director Davy Chou explores the film-industry of pre-war Cambodia through images, and voices, of the present. His camera visits old theatres, new karaoke bars and restaurants, as once-famous directors and actors (who were ‘like half-gods’) narrate their memories of the ‘golden era’ and its downfall. The film itself hopes to discover signs of the pre-war film-industry in buildings, in music and song.

As a retired producer laments the loss of the public admiration, Davy explores shells of old cinemas, now resided in by numerous families without the means to afford a flat in the increasingly expensive city centre. Though ostensibly tracing the rise and fall of Cambodian cinema through talking heads and explorations of the film-industry’s repurposed architectural spaces, Golden Slumbers is a visual narrative of contemporary urban life in Cambodia, with glances towards issues of globalisation, poverty and national identity.

The laments of ex-producers, directors and actresses are tempered by the creative and ruminative powers of Davy himself, whose optimism for Cambodian cinema’s future is not shaken by the lack of infrastructure he perceives in Cambodian Arts. ‘I am sure that in the next few years we will see more and more fiction films being made. They are telling stories about this country.’

Winner of the World Cinema Grand Jury Prize at Sundance Film Festival, Kalyanee Mam’s documentary follows the lives of three young Cambodians, whose lives are affected by the rapid development of the urban landscape, industrial and farming industries. A River Changes Course is a humane approach to the issues of ‘progress’; a term whose positive connotations are debated. Mam seeks to address the blind optimism of a newly openly capitalist society, experiencing the thrills of the free-market with the intimate portraits of her three subjects, whose lives are irreversibly changed, and still in the process of change, as a result of a free-market policy.

Unlike many creative projects made in, or in relation to, Cambodia, Mam choses to relate the concerns of contemporary Cambodian society to post-war governing strategies. ‘Atrocities are happening,’ Mam insists. This is not a film about a recovering society, a society traumatised by a civil war now past, but a film about life in Cambodia under Prime Minister Hun Sen, whose control over the democratic country has lasted over three decades.

Arguably a cinematic demonstration against current government policy as well as critical debate, Mam seeks to provide information and knowledge to the local and international communities, perceiving in this the power to enact change.

Rithy Panh, an honorary fellow of SOAS (The School of Oriental and African Studies), has gained international critical acclaim for his documentary work focused on the Khmer Rouge regime and post-regime communal trauma. S21: The Khmer Rouge Death Machine follows two survivors of the Toul Sleng Prison as they revisit the site of their own torture and imprisonment, now a museum in the centre of Phnom Penh.

Vann Nath and Chum Mey meet former captors – guards, interrogators, a doctor and a photographer, whose photographs (things the photographer himself considers ‘works’) have been shown around the world. Rithy formulates a feature-film documentary around these meetings, but unlike Shoah’s director Claude Lanzmann, Rithy choses to instigate no more than meetings, and allows his subjects’ conversations to debate distinctions such as ‘victim’ and ‘survivor’, without overt interference from himself.

The film shows no bias towards one subjects’ life over that of the other. Both are laid open to view by the discussions which occur before the lens. The first subject the audience meet is not either of the ‘survivors’, but a soldier, whose mother admonishes him – ‘You have to tell the truth’ – and neutralises her own guilt, assuring herself that she brought up her child well. A little while afterwards, the soldier insists, ‘I had always been good. I still am today’.

Holding a kind of laissez-faire attitude to the subjects of his film, Rithy allows room for awkwardness as well as emotional intensity, and permits the clinical (rather than critical) camera to juxtapose and then blend in with the human elements: the hand of one survivor on the shoulder of another, a former soldier allaying his own guilt before his mother (‘I had always been good. I still am today’), and his mother, in turn, neutralising her own (‘I brought you up well’).

S21: The Khmer Rouge Death Machine premiered at the Cannes Film Festival in 2003, where it was awarded the Prix François Chalais.

Emerging director Neang Kavich choses his subjects, and thus the focus of his documentary, from his own neighbourhood. A student of Rithy Panh, Neang adopts a similar observational style in his documentary-making as he follows San Pattica, a young Cambodian-Cameroonian whose father, an UNTAC soldier, and mother left the country in 1993.

When Neang’s audiences meet Pattica, his experiences of growing up in a racist society have prompted a desire to find his parents. Neang sits with Pattica and his grandmother as they lament the treatment he receives from his peers, follows Pattica to and from school, and waits with him as he visits authorities, with the hope of discovering his parents’ whereabouts.

In Where I Go, Neang reveals sources of discomfort, sadness and pride for Pattica and his grandmother, who reminds him that ‘although we are black and ugly, we never beg them for meals’. Neang’s film renders the solitary life of Pattica somewhat beautiful, and his unanswered attempts useful.

In early 2013, the Khmer Rouge Tribunal in Phnom Penh opened the floor to women and men who had been forced into marriage with strangers during the Khmer Rouge regime, with the aim of enforcing procreation without enabling ties within pre-war communities.

Red Wedding considers the experience of forced marriage from the perspective of Sochan Pen, whose husband raped and beat her on her wedding night. Though traumatised, Sochan had maintained a 30-year silence. Directors Lida Chan and Guillaume Soun meet Sochan working in a rice field in a former killing field, taking tranquilisers every night to sleep. The cameras follow Sochan to the Khmer Rouge Tribunal, where she hopes to relate her own experience before judges, amongst the noise of around 600 other stories.

Like Rithy’s S21: The Khmer Rouge Death Machine, Red Wedding highlights the complex nature of victim distinctions in a war-state which tore at the moral fabric of a functioning society. Chan and Soun, by making the film during a period of mass hearings on the atrocities committed against the civilian community during the Khmer Rouge regime, bring to bear the question of whether one person’s experience can stand for that of many.

Red Wedding was awarded Best Mid-Length Documentary at the 2012 International Documentary Film Festival Amsterdam. Due to lack of funds and resultant strikes by the local employees, the Khmer Rouge Tribunal has been halted numerous times and testimonies have been left unheard.