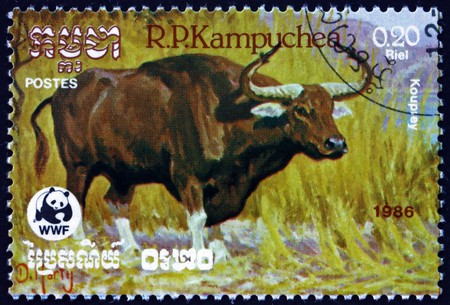 The kouprey is shrouded in mystery and found itself at the centre of a controversial debate over its very existence. Now believed to be extinct, the animal’s intrigue continues.

Despite holding the crown of Cambodia’s national animal, visitors will be hard pushed to find a kouprey during a trip to the Kingdom of Wonder. 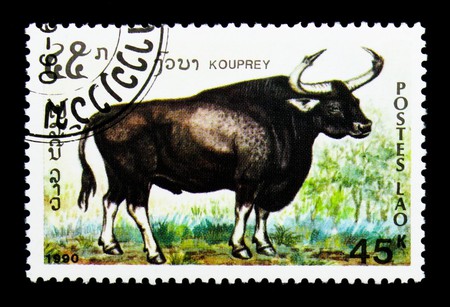 A kouprey appears on a stamp | © Mitrofanov Alexander/Shutterstock

The forest-dwelling species of wild cattle was first discovered in 1937, when a French zoologist was assigned to Vincennes Zoo to examine a young male that had been sent there from Cambodia. The large bull ox, weighing almost a tonne had fascinated researchers, who were astounded by its size.

Declaring the beast — which is known for its tall, narrow body, long legs, large crest-shaped horns and humped back — a new species, little remained known about the animal.

So, in the mid-1960s, zoologist Charles Wharton organised an expedition to Preah Vihear province in the north of Cambodia to find, capture and study a kouprey.

Despite unsuccessful attempts, his research and reports contain the most ecological data available for the kouprey, and the international buzz behind the animal led to it being awarded the coveted title of Cambodia’s national animal.

Decades of civil war and conflict took the spotlight off the beast, with the last recorded sighting in 1988, according to the World Wildlife Fund (WWF). In 1996, it was declared critically endangered, with an estimate of fewer than 250 remaining in the wild.

In 2006, outrage ensued when a team of researchers from Chicago’s Northwestern University announced that the animal doesn’t exist. They claimed genetic tests they carried out showed the kouprey was in fact a hybrid of domestic cattle and the Banteng, a species of wild cattle found in Cambodia and across Southeast Asia. 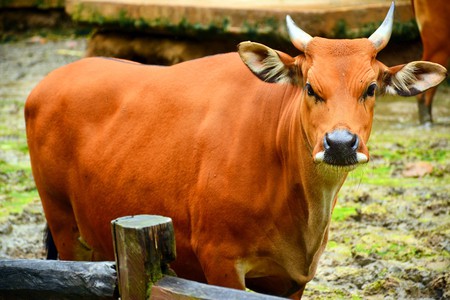 However, this debate was quickly put to bed when a kouprey skull was discovered, which underwent intense testing and genetic analysis to confirm its existence.

With the kouprey only being found in the 1930s, and relatively few sightings since then, along with little scientific evidence recorded on the species, not much is known about the elusive mammal, which lives in small herds fronted by a female.

However, the lack of sightings has led many to believe the animal is now extinct — the victim of issues that threaten many of Cambodia’s other endangered species, such as being poached for their meat to eat and horns and skulls to be used in Chinese medicine, and the decimation of their natural habitat.

A number of wildlife organisations are carrying out surveys to spot koupreys in Cambodia and confirm their existence, with sceptics’ extinction claims often questioned by the scarce sale of a skull at markets. For example, Wildlife Conservation Society Cambodia is currently working in the country’s Northern Plains.

For now, the kouprey and its habits remain a mystery to mankind.