Interview with Cambodian Artist Leang Seckon: Painting Past and Present

One of Cambodia’s most well-known artists, Leang Seckon combines ancient Khmer narratives with modern-day concerns, such as rapid development, environmental degradation and the shadow of Cambodia’s violent past. Lisa Pollman interviewed Leang Seckon to find out more about his current solo show in London, his newest work drawing from sacred Buddhist texts and how his artwork touches on the very psyche of the Khmer culture itself. 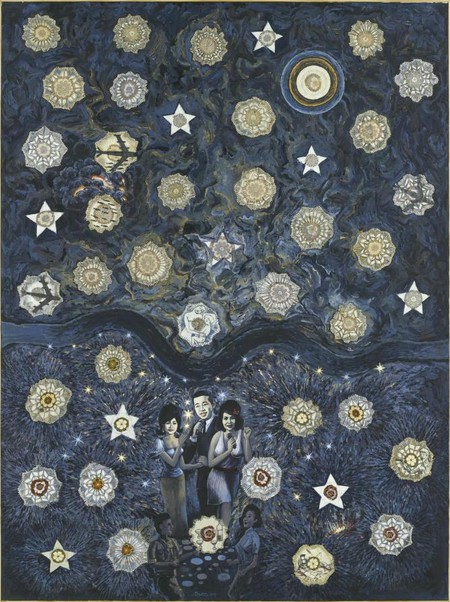 Leang Seckon was born in Cambodia’s Prey Veng province in 1974 and graduated from the Royal Academy of Fine Arts, Phnom Penh, in 2002. Leang grew up during one of the most devastating times in Cambodia’s history, a period of civil unrest resulting in the Khmer Rouge’s overthrow of the Lon Nol government and ultimately leading to an estimated two million deaths at the hands of Pol Pot.

The artist’s work has been shown widely throughout Southeast Asia, as well as selected locations in Hong Kong, Japan and Europe, and was a part of New York’s Season of Cambodia Festival (2013). He has participated in the 4th Fukuoka Asian Art Triennale (2009) and has been a Sovereign Asia Art Prize finalist twice (2009, 2005). Leang’s paintings and video work are currently on exhibition in Hell on Earth at the Asia House, London, from 27 June to 25 July 2014. 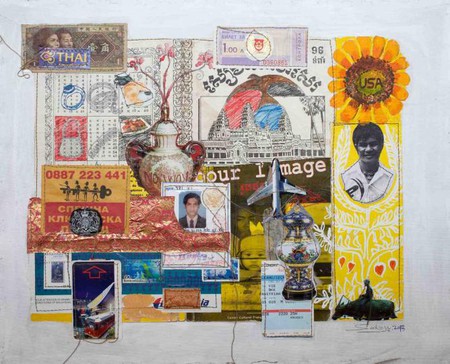 Lisa Pollman: This is your second solo show in collaboration with the Rossi and Rossi Gallery held at the Asia House. How is the artwork for Hell on Earth different than your first solo show Heavy Skirt?

Leang Seckon: My first solo show held in London, Heavy Skirt, told a history of Cambodia that I had learned from my mother and the villagers of my hometown. Hell on Earth is more autobiographical; the works are the result of my own observations and feelings about the pressures of society that impact our lives both directly and indirectly. These include war, political ideologies and the destruction of the environment.

LP: Please tell us about the video work that you’ll be showing in London.

LS: The video work is a record of my life and my experiences. The work focuses on my observations of society and the environment being destroyed by development and modernisation.

LP: With ‘Parasol of the Moon’, you have placed a figure reminiscent of Sin Sisamuth, the ‘King of Khmer music’, at the bottom of the canvas under a Van Gogh-like ‘Starry Night’ sky. What’s the story behind this piece?

LS: When you first look at the painting you see the beautiful night sky, the glow of the moon and the stars. However the light that you see is actually the light from parachutes falling slowly to the ground, marking places to drop bombs. At once the gentle glow of the night sky is filled with a much more sinister terror. In the early 1970s, the Mekong River formed a border between the Communist occupied areas and free American supported areas. The city of Phnom Penh, filled with dancing, singing, concerts and fireworks, was soon to be hit by grenades and bombs. 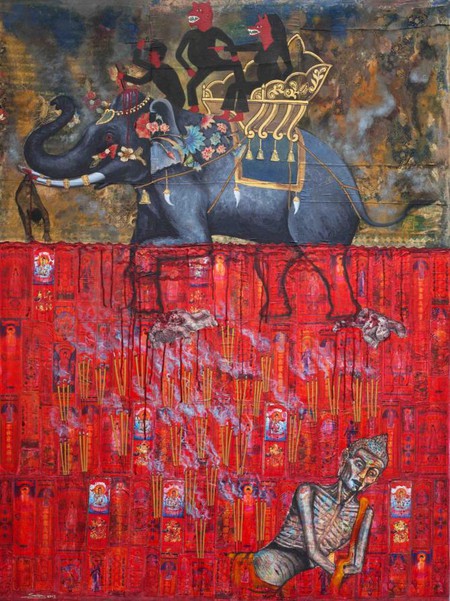 LP: You refer to a ‘prophetic’ Buddhist text known as the Buddh Damnay in Hell on Earth. What symbols or stories are depicted in your artwork referencing this sacred text?

LS: The Elephant and the Pond of Blood (2013) is probably the work that most obviously references the Buddh Damnay. The Buddh Damnay predicted that ‘war will break out on all sides… blood will flow up to the bodies of elephants; there will be houses with no people in them, roads upon which no-one travels; there will be rice but nothing to eat.’ In the painting, a royal elephant, decorated with flowers and jewels, struggles to wade through a river of blood. Its riders, a tiger and a dog, direct it to keep moving forward as the tide of blood covers the hope, culture and history of the Khmer people.

Other works that reference the Buddh Damnay are Flooding Pot, Falling Gourd, Indochina and Offering. The prophecies of the Buddh Damnay, familiar to all Cambodians, were once thought of as fortunate prophecies about the future. The Killing Fields of the mid-1970s gave the text a much darker meaning. Still repeated constantly and known to all, the Buddh Damnay provided Cambodians with an explanation for the Khmer Rouge period.

LP: Do you feel a sense of relevancy or urgency regarding the subject matter of your artwork in terms of contemporary society? Does your work address the human condition or is it primarily relevant to Khmer history and people?

LS: A lot of the work relates specifically to Khmer history and its people, however I believe the message relates to contemporary society in general: the work examines the past and present, culture, the environment, politics, people, and death. All universally relatable themes. The inspiration for the work is drawn from my own experiences growing up under the tyrannical regime of the Khmer Rouge and its impact on society, but also from what I see day-to-day – the impact of development and modernisation on the environment and the individual, and also the importance and role traditional religious symbols play in a society that seems to give them increasingly less space and importance. 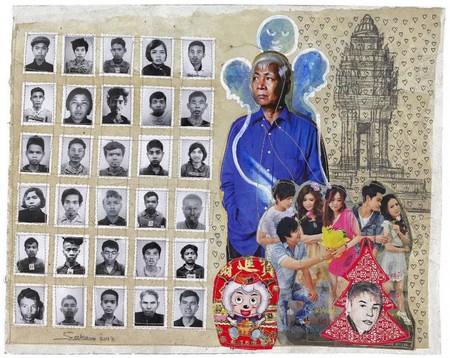 LP: Do you find the creative process to be cathartic? How?

LS: Creating is something very important in my life. When I think or feel something, I create an artwork in order to materialise my feelings and thoughts. Once a work is finished, even if the problems and sufferings in society are still present, I still feel some relief and I don’t come back to it. I have already expressed what I could, and fixed it in my own way. Instead I move on to other topics and try to organise and fix them. In a way it is like giving a meal to a person who is starving. Once the person has eaten and finished the given food, they are happy, full and able to sleep well. 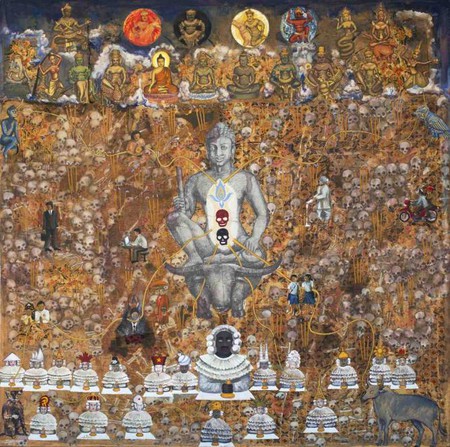 LP: Your artwork has traditional symbols and motifs, juxtaposed against contemporary figures or events. Does this accurately depict present day Cambodia, as a country steeped in traditions while facing a modern, quickly developing society? How?

LS: Society is constantly reshaping itself. I think it is very important to bring traditional symbols alive in times of rapid developments, such as what is happening in Cambodia today.

The use of traditional figures, symbols or motifs does not necessarily imply the work is traditional. I think about them in a contemporary context and with a new perspective. I believe traditional symbols of an older culture are still very important for the present day. People that survived the war have been thrown into this rapidly developing society, which has made them move forward too quickly. They have not had the time to reflect on contemporary life and society in relation to their past. As a result, everything seems unclear, confused and of low quality. Thinking about these traditional motifs and symbols can help clarify things.

Buddhism was introduced to Cambodia over 1000 years ago. The way the old generation used to respect and relate to the Buddha and his teachings is very different to the way the new generation relates to it today. I think in the future it will be even more different. Under the Khmer Rouge, drastic changes to Cambodian society meant that religious reverence towards the Buddha was lost. However, Cambodians are still very dependent on Buddhism. They unwittingly relate to the religion throughout their lives on a daily basis. The innate spirituality of the individual is stronger than the forced external changes brought about by society. When Cambodians feel that the end of their lives are approaching, they actively search out the religion, wishing to redeem themselves and avoid eternal Hell.

I also like to incorporate contemporary figures or events in my art. For example, the piece Bang Skol (Blessing to Heaven) shows symbols of the United Nations and eighteen different nations in parallel to King Suryavarman with eighteen traditional gods, spirits and ghosts. This painting offers a blessing to the spirit of the people who died during the Khmer Rouge period and to my father. This work provides a way for them to find justice after death. 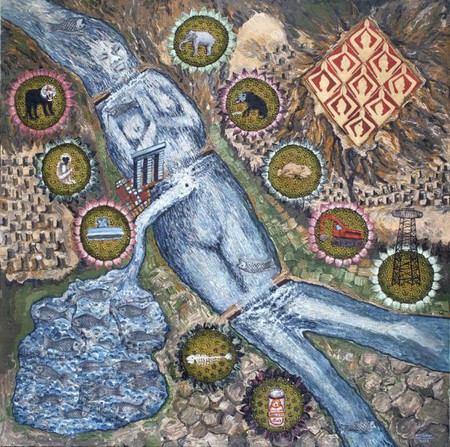 LP: Tell us about the contemporary art scene in Cambodia. Do you feel that the younger artists (those who were born after the Khmer Rouge) are experimenting with different topics outside of the Killing Fields or is it still a deep-rooted topic of discussion for all artists regardless of their age?

LS: Younger artists haven’t witnessed the horrors committed by the Khmer Rouge with their own eyes. However they have inherited from the previous generation the feeling of suffering and are fully aware of what happened. They have been filled with a desire to know more about the period and to learn about Cambodia’s pain, while fully understanding Cambodia’s new society and why it is evolving this way. Because of this, they express, through their art, the connection between Cambodia’s rapidly evolving society with the past sufferings caused by the Khmer Rouge regime.