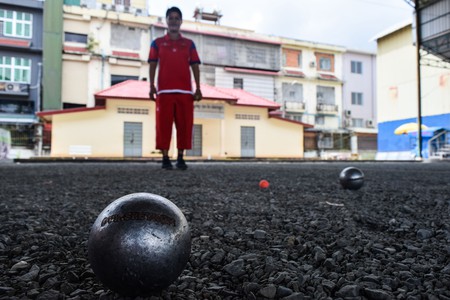 Petanque, or boules, is a French variant of bowling. Brought to Cambodia by the French over 100 years ago, when it was one of their ‘Indochine’ colonies, the sport not only remains popular across the country, but produces its only world-beating athletes.

Wearing her national kit – a loose fitting red polo shirt and matching capris – Ouk Sreymom does not cut the classic image of a sporting world champion. That is until she gives a mini coaching lesson to the lone player practicing at the national petanque courts on a cloudy Saturday morning. 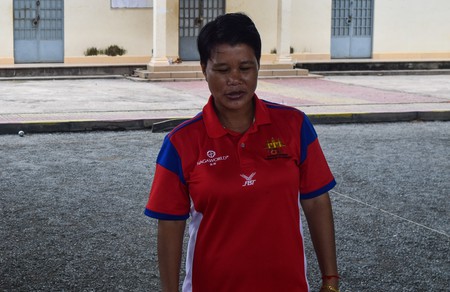 A quick glance at a target ball at the other end of the court, and she flicks the ball in her hand into a smooth lob with gentle ease, comfortably hitting the target with a metallic ping. And then she does it again a second time.

‘I first played in 1997, when I was 17 or 18. A coach saw me playing around throwing fruit with some friends near the old national stadium, and he asked my mother if he could train me to play petanque,’ she says matter-of-factly.

After a few months of training she’d joined the national team and was flying to Paris for the World Championships, where she picked up a silver medal in the pairs. She has been a world class player ever since, becoming world champion at this years event in Belgium. Cambodian sporting achievement on the international stage, in most sports, is modest to say the least. In petanque, however, it is a different story.

Cambodia has won some 150 medals in international competition and won five of the 28 available medals at the most recent SEA Games in Malaysia, where Sreymom and Ke Leng won gold in the female doubles.

‘We have very good coaches, clear training schedules and lots of focus, that is maybe why we win,’ offered Sreymom. ‘For myself, I train extra hard. I arrive at training 30 mins before the others, and stay at least 10 mins longer.’

A normal morning starts at 8.30am for Sreymom – who has a 9-5 job as a Major in the Cambodian military – after the near-ubiquitous Cambodian breakfast of rice porridge. After lunch, the rest of the day is hers to do with as she pleases.

Looking at the list of top petanque teams shows a distinct francophone character. France, Tunisia and Morocco have all produced numerous winners. The game, which requires players to throw metal balls as close as possible to a small coloured jack, originated in southern France at the beginning of the 20th century. Its name comes from local dialect term pès tancats, or ‘feet planted’, in reference to the need to keep both feet on the ground when throwing.

British bowls, Italian Bocce, American bowling, and Scottish curling are all cousins of the sport, tracing their roots back to 6th-century Greece; the Romans are credited with adding the target object.

For amateur petanque enthusiast Tha Savaroth, the lasting attraction of the sport in Cambodia, which remains despite following the departure of the French, civil war and the horrors of the Khmer Rouge period, is due to the relatively easy access to courts and balls, and petanque’s similarity to a traditional Cambodian game.

‘It is similar to the Cambodian traditional game of “bos low”, where someone digs a small hole in the dirt, and people have to throw coins and try to get them in, or near, so I think that’s why the popularity has remained in Cambodia,’ explained the 47-year-old. ‘I play to keep healthy. I first started to play regularly in 2005 after seeing everyone playing here while I would walk around the national stadium in the evenings for exercise.’

‘Most people play after work for a few hours, with the lights we can play when it is dark, and the roof allows us to play into the rainy season as well,’ he added.

While sets of petanque balls made in Laos can be bought for as little as $30, committed players spend a lot more. Savaroth spent $350 for his monogrammed set, ‘made in France,’ he says proudly. Sreymom’s are also French and monogrammed, but she remains tight-lipped as to their cost.

Watching the intense games taking place each evening near the national stadium, under the floodlights of the covered roofs of the petanque courts, one could be forgiven for thinking it was a sport for older people. Not so, stressed Savaroth.

‘Until recently, it used to be more popular with people over 40, yes. But the success of people like Ouk Sreymom and Ke Leng means younger people are more interested now, which is great for the sport.’ 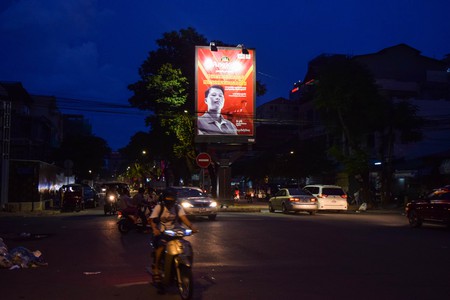 Sreymom enjoys the attention that her successes have brought. Official processions have transported her back into Phnom Penh from the airport after victories at the World Championships and SEA Games, and prize money from the Ministry for Sport, Education and Youth Services – and $40,000 from the Prime Minister – has been generous. But she remains modest.

‘I am reluctant to say I am a role model for young people or women. I just do what I love, but if people see me as one then that is great.’

Sreymom’s niece and nephew both compete in petanque, she notes with pride, adding that age is not a determining factor in petanque success. ‘Ke Leng is over 50 and still playing well, and we will both continue to play as long as we keep winning.’