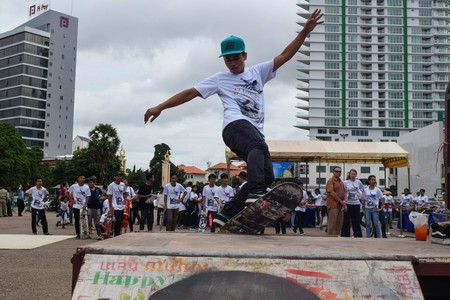 On a flat patch of tarmac outside the national stadium, a group of kids are learning to skateboard; some practise just standing on the board, while others attempt more ambitious tricks. A few old hands—a relative term, considering most learnt to skate watching YouTube videos—show off grinds on a couple of low rails.

The scene outside the 1964 concrete “New Khmer”-style building in Cambodia’s capital is unusual for a number of reasons. Ignoring for a moment the TV cameras, the U.S. ambassador in attendance and the 90’s punk rock music on the loudspeakers, the idea of skateboarding here, and certainly public displays of the sport, is a nascent one.

But there is clear room to grow, explained U.S. Department of Special Sports Envoy Neftalie Williams, the star of the morning skate. With skateboarding set to debut as an Olympic event in Tokyo 2020, the American sport is having something of a reawakening. 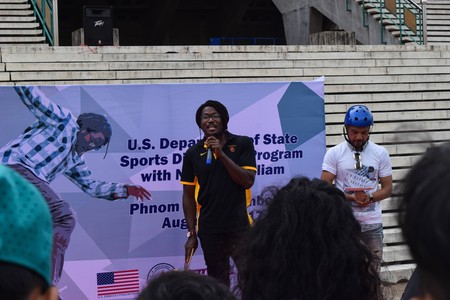 “The skateboarding scene in Cambodia is small but powerful and growing stronger everyday,” he explained. “The only missing ingredients are partnerships between local skateboarders and the government to create free skate parks, so that everyone has access to this healthy, fun global activity.”

Neftalie is the first such envoy for skateboarding, part of a U.S. government program that sends athletes and coaches oversees to “hold sports clinics for young people and their coaches, participate in community outreach activities, and engage youth in a dialogue on the importance of leadership and respect for diversity,” according to the State Department website. A sister programme sends dancers, artists and musicians around the world as arts envoys.

The list of sports envoys includes representatives from mainstream sports such as soccer and baseball, a strong focus on disability sports—and outliers like skateboarding and disc golf.

A lecturer at the University of Southern California Annenberg School of Communication and Journalism in Los Angeles, Neftalie is also a PhD candidate at the University of Waikato in New Zealand. He spent a week in the Netherlands in 2016 as part of a U.S. embassy campaign to help the integration of Syrian refugees. 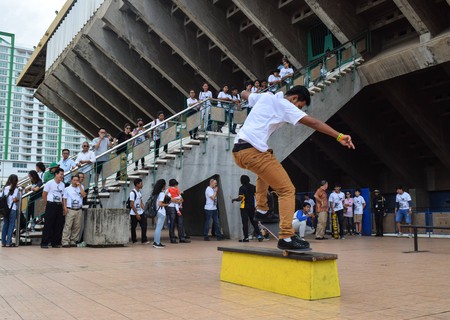 “Between the skateboard scenes around the world, there is the same universal language, with everyone riding the same rails and jumps the same stairs. I have seen the same thing in Brazil, South Africa, the Netherlands and here every country needs to spend time to develop their youth.”

“I implore officials to support the youth, even if you don’t understand the activity. If it’s something constructive and inclusive it should be supported. Unlike other team sports where athleticism is so important, there is a much lower bar for entry to skateboarding.”

Neftalie’s academic study, and skateboarding activities in places like Cuba and Sao Paulo, have shaped his views on how globalization affects diversity, identity and youth empowerment. His week-long visit to Cambodia has focused on promoting education by using skateboarding as a medium to engage students. 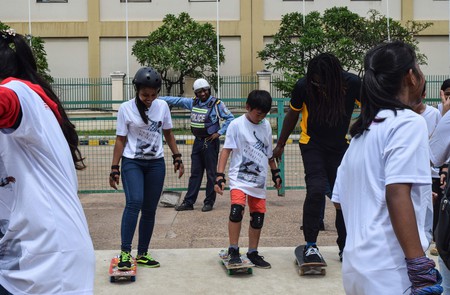 “Skate culture naturally links to academics and institutions of higher learning. For example, art and design are used to create skateboarding footwear, apparel, and board graphics,” he noted.

“Engineers are crucial for improving board, wheel and truck components. Multimedia and digital content creation are a skateboarder’s lifeblood – it is how we see the local scenes and skills of skateboarders all over the world and keep our global community tight knit. All of these are interests that can harness a young Cambodians love of skateboarding and turn it into a way for them to improve and enhance themselves and their local community.”

He is not the first to use skateboarding as a tool for youth empowerment in Cambodia. Skateistan, an international NGO founded in Afghanistan 25 years ago, has two projects in Cambodia. Its skate school opened in Phnom Penh in 2012, with a small skate park and classroom allowing it to include skateboarding with a wider focus on empowering children with disabilities, those from low income backgrounds, trauma or abuse victims, and girls. 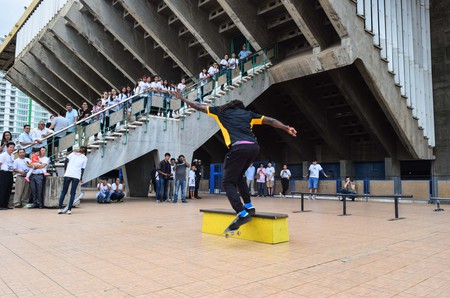 “It’s fun here, because they don’t have preconceived notions about what’s cool…so you see people skating here a little bit differently—and it’s refreshing,” he told The Cambodia Daily. “I would just like to see it as just another accepted activity for kids to participate in, and something parents can encourage. That’s all I can really hope for.”

Neftalie is working with a number of skateboarding legends, including Hawk, for an upcoming competition in the U.S. that will mix skateboarding and education for the first time, and will feature photographs he has taken during his time in Cambodia.

In a press release advertising the event, the U.S. Embassy described Neftalie’s visit as aiming to “develop mutual understanding between the United States and Cambodia by connecting with Cambodian youth through skateboarding clinics.”

For the newest skateboarding fans in Cambodia—falling, laughing and sometimes getting somewhere—he has had an immediate effect.

“It was very great to try skateboarding today as I have seen it in movies before but not in Cambodia,” explained a breathless 14-year-old Sreypich Heang, with a large smile on her face. “It is so hard, but I had great fun and cannot wait to try it again.” 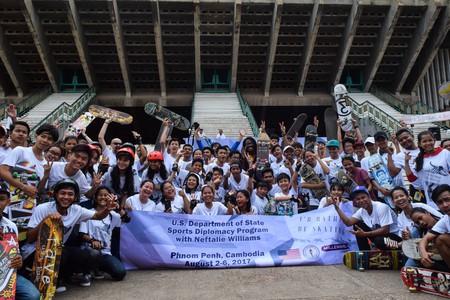 © Pete Ford
Give us feedback