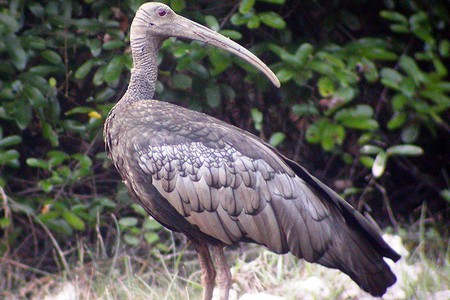 Cambodia’s national bird may well be critically endangered, but efforts are under way to bring the bird back from the brink of extinction. Here are 11 facts about the Giant Ibis and what makes it so special.

In 2005, the Giant Ibis was designated by royal decree as the national bird of Cambodia, helping to raise its profile and boost conservation efforts.

It’s the largest ibis in the world

Twice the size of the second largest species of ibis, the Giant Ibis is just that–giant. On average, adults grow to 40 to 40.5 inches long, measuring up to 39 inches when standing upright. They also weigh in at 4.2kg, with a wing chord of 20.6 to 22.4 inches. The bird can also be distinguished from its loud ringing call–a-leurk a-leurk–that it repeats at dusk and dawn.

It leads a tough life

Listed on the ICUN Red List as critically endangered, the Giant Ibis went unrecorded for more than 50 years until it was rediscovered by Wildlife Conservation Society (WCS) researchers in 1993. Once found across much of mainland Southeast Asia, today an estimated population of fewer than 200 live mainly in the northern and eastern plains of Cambodia. Deforestation, climate change and poaching are blamed for the bird’s (as well as other wildlife’s) decline.

The Giant Ibis is pretty shy

Shy by nature, the birds feed in secluded forest pools that are far from villages. As a lowland bird, it likes to wade in water, preferably swamps, lakes, rivers, flooded plains, ponds and seasonal water meadows.

It breeds in wet season

Unlike other large water birds living in Cambodia’s Northern and Eastern Plains, the Giant Ibis breeds in the wet season. The females lay two eggs at the start of the rainy season, which is usually around June, and nest in trees.

As well as standing out due to their size, Giant Ibis are pretty striking in the looks department too. Adults tend to be dark, with a grey-brown plumage and naked greyish head and upper neck. They have dark bands across the back of the head and shoulder area, and their pale silvery-grey wing tips also have black crossbars. The beak is yellowish-brown, the legs are orange and the eyes are dark red.

Conservation is crucial for the Giant Ibis

With the bird species classed as critically endangered, the conservation work carried out by organisations, such as WCS and WWF Cambodia, is essential to its survival. Projects include nest protection schemes and educating local communities on the importance of protecting Giant Ibis into the future.

They forage in water

Giant Ibis have long, curved beaks that they use for foraging in shallow waters and between vegetation. Their favoured feast is aquatic invertebrates, crustaceans, small reptiles and amphibians, as well as earthworms, locusts, mole-crickets, cicadas and other insects. 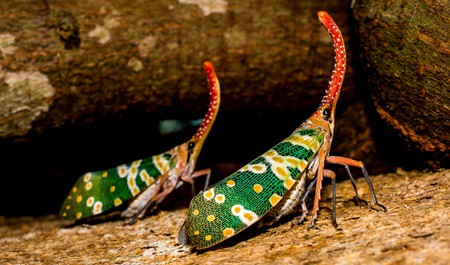 Tourists are playing a part in its preservation

Tourism is even playing a role in preserving the Giant Ibis population. A handful of responsible tours offer visitors the chance to catch a rare glimpse of the bird in its natural habitat, with funds ploughed back into conservation efforts. For example, award-winning Sam Veasna Center runs an ecotourism project at Tmatboey, a remote village in Kulen Promtep Wildlife Sanctuary in the Northern Plains.

Several Ibis discoveries were found last year, raising hopes about the Giant Ibis’ future. In August, 19 nests were found in Preah Vihear’s Kulen Promtep and Chhep wildlife sanctuaries, the natural habitat of many Giant Ibis. And in September, WCS and Ministry of Environment workers found two pairs of Giant Ibis in Mondulkiri’s Keo Seima Wildlife Sanctuary. They were the first of the species to be found there in more than a decade.

Rice is even helping

In 2009, Ibis Rice launched as an organic, wildlife-friendly rice. The aim was to produce a world-class Cambodian-produced rice while provide struggling rice farmers with a sustainable form of income and protecting the country’s nature. To date, more than 500,000 hectares of forest and wetland have been protected, along with more than 50 endangered species, including Giant Ibis.