Exploring the Best of Phnom Penh on Your Cycle

Hopping on two wheels is a great way to explore the outskirts of Phnom Penh and beyond. Here’s our guide to some of the best spots to see on your bike.

Stepping outside Phnom Penh brings with it a whole new world. Gone is the hustle and bustle of capital life, the clogged-up roads, and the incessant sound of construction in the background. Here, quiet dust tracks weave through paddies and small villages, where children frantically wave and scream, “hello,” as you ride by.

As a relatively compact city, hitting most of the tourist hotspots within a day by bicycle is relatively easy. What isn’t so easy is the traffic, with the roads getting increasingly congested as more cars are on it. All road rules are thrown out of the window when it comes to driving in the capital, with red lights ignored, traffic driving the wrong way down the road, pavements used as extra lanes, and fumes chugging into the air.

If this doesn’t put you off, then you’ll be glad to know that bikes can be hired across the capital, with many guesthouses and hotels offering them. Prices and conditions of bikes range, but expect to pay about $5 a day. It’s also advisable to wear a helmet. Despite many Cambodians and foreigners choosing to ignore this law, Cambodia’s roads are one of the country’s biggest killers, so put your safety first. 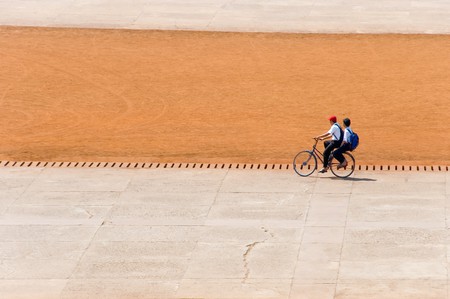 Boys cycle through the stadium in Phnom Penh | © Yojik/ Shutterstock

Escaping the city by bicycle is the best way to spend a day. Koh Dach, or Silk Island, is a popular spot for avid cyclists. It is easily accessed by a short cycle across Japanese Bridge to the ferry terminal, where a 10-minute ferry ride takes you to the island. Here a single path circles the peaceful island, which is home to many silk weavers. With rarely a car in sight, this is rural Cambodia is at its finest, with paddies stretching to the horizon, small villages with traditional wooden houses on sticks, and Cambodians chilling on hammocks.

Sitting a little closer are the Mekong Islands, which are accessed via ferry near the NagaWorld hotel. Slightly smaller than silk island, this secluded spot also boasts the quiet life, and is another great escape from the city’s humdrum.

For those who want to hit the roads but feel they need a little help along the way, there are a range of tour companies offering half- and full-day bicycle rides.

Grasshopper Adventures is popular, offering a half-day islands adventure, as well as a half-day exploring Silk Island at twilight. Mad Monkey Hostels also puts on a series of bike tours throughout the capital and surrounding area.