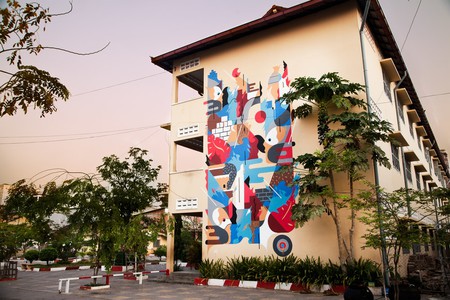 The urban art movement has been sweeping the globe for decades, and in recent years Cambodia has finally caught up with the trend. With the annual Cambodia Urban Art Festival taking place in the capital this December, this is the perfect time to give the lowdown on the country’s street art scene.

Cambodia’s art scene and creativity were almost completely snuffed by the Khmer Rouge regime, which ruled the country from 1975 to 1979.

But as the country rebuilt itself, Cambodia’s innate artistic ability shone through, with many of its youth turning to art as a form of expression. And what better modern-day artistic medium to use as a tool than street art?

Step off the main streets and into the sprawling network of alleys that make up Phnom Penh, and you’ll see evidence of this movement. Colourful murals brighten up drab paths, abandoned buildings, and crumbling structures throughout the capital.

The capital’s well-known street artists’ growing reputations haven’t gone unnoticed, with the increasing number of contemporary restaurants, bars and hotels in Phnom Penh recruiting them to add a splash of personality to their walls.

Who to watch out for

French street artists Chifumi and Theo Vallier have helped seriously promote the scene since landing in the country a decade ago. Since then, they have provided guidance and support to budding local artists, helping them to find their own style and experiment outside their comfort zone. 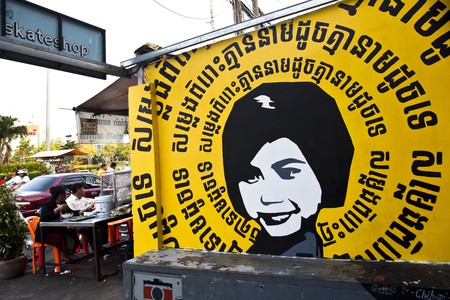 On a local level, Cambodian Lisa Mam – the country’s only female street artist – and Peap Tarr, a Cambodian New Zealander, have been championing the movement. Their signature style can be found in a string of bars, restaurants and hotels across the country as well as abroad.

Young Cambodians who are embracing the scene and making their mark, include Kimchean Koy, David Myers – Davido – and Daniel Rothmony Ou – Strange the Rabbit.

Now on its third year, Cambodia Urban Art Festival is set to take over the capital this month, bringing with it a string of art, performances, live music, and solo exhibitions all throughout Phnom Penh.

The festival will feature a top bill of international artists, including Fonki from Canada, ArtLab from Nepal, Mauy from Thailand and Julien Croyal from France to work alongside local talent such as Davido, Ket Monnyreak, and Kakada Yi.

On 7 December, a pre-party will take over Samai with DJs, cocktails, and a range of goodies up for grabs, including limited edition designs of Samai’s bottles by Theo Vallier, Julien Croyal, and Ket Monnyreak.

8 December is the grand opening at The Mansion FCC, with live painting by Davido, screen print workshops, and music from a string of acts such as 12MÉ feat Lisha, Sang Sok Serey, Deejay Cake, and Lina Bong. 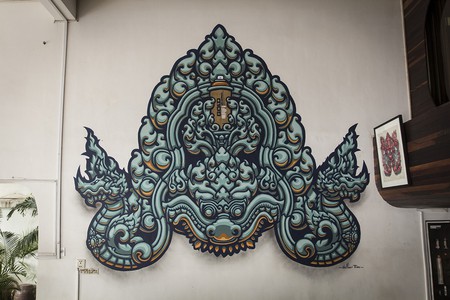 Street 240 ½ will be a hive of activity the next day with a street party packed full of activities. Artists will be showcasing their skills with live paintings, while the tunes will start pumping at 4pm as drinks and snacks flow.

There will also be demonstrations in capoeira – the martial art that was born in Brazil’s streets – and a screen print booth and flash tattoo stand for anyone wanting to get inked.

The final day of the festival presents its signature tuk tuk tour, which will see a convoy of vehicles stop off at 15 murals freshly painted by the festival’s team of local and international artists ahead of the day. Tickets cost $5 to $8 for the three-hour tour and include a gift bag with a specially-designed map of the city, indexing each street art spot.

The tuk tuk tour finishes at the closing pool party, which caps off the festival at DIB Club on Koh Pich.