Exciting New Names You Should Know In Contemporary Sculpture

Sculpture, one of the oldest art-forms, has a long tradition throughout different cultures in Europe, Asia, Africa and America. The variety of styles and movements in sculpture’s history are a continuous source of inspiration for contemporary artists, but some of them depart from the classic, modernist and traditional concepts to incorporate innovation of the sculptural medium. We profile five artists who engage with sculpture through cutting-edge practices. 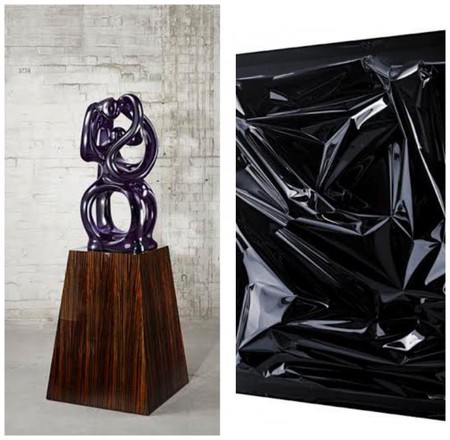 Anselm Reyle creates abstract sculptural installations and paintings that synthesize pop and random objects, playing with the social values surrounding everyday material ‘kitsch’. Reyle gives a seductive edge to his work by using glitzy materials and colours, such as silver foil, neon, mirrors, glitter and ‘Day-Glo’ paints. He takes inspiration from modernist art movements, especially Modernist painting and Abstract Expressionism, infusing them with his own stylistic touch. His paintings achieve a three-dimensional appearance, approaching the form of hanging sculptures. Adopting formalistic conventions of the past, such as gestural smears, hard-edge stripes or poured and dripped paint, his work recalls Karl Otto Götz, Kenneth Noland, Jackson Pollock and Barnett Newman. Reyle does however, subvert the traditions of modernist ‘masters’ by inserting unusual materials and elements.

His sculptural installations appear as ‘über-kitsch’ as his paintings: reflective surfaces intermix with vibrant colours, glowing with neon and LED lights that revive found objects such as wagon wheels, hay-carts or 1970s ceramic vases. As with his paintings, Reyle often adopts a sculptural motif that has become a modernist art cliché and re-elaborates it, giving it new meaning and context. Reyle’s ideas are often inspired by music and its context, as he was himself influenced in the early days of his career by 1960s psychedelia and the hard-edge graphic design of the early punk movement. The title of his 2014 exhibition at Kukje Gallery in Seoul, What About Love, is based on a song by the American rock band Heart and plays with themes of spectacle and loss by darkening the gallery and concentrating the lighting on just a few select works. 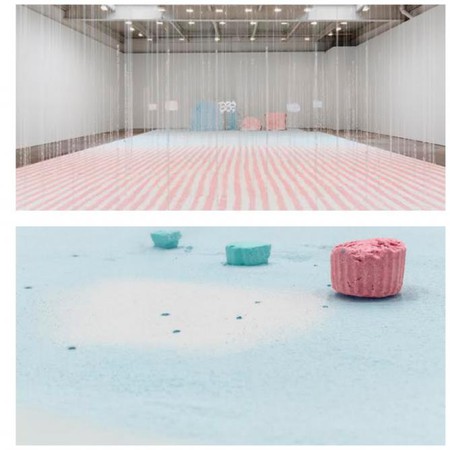 Karla Black is a graduate of the Glasgow School of Art and started working with performance before turning to sculpture. From the literal presence of her own body in her work, Black shifted to the withdrawal of ‘anything that could be read as a direct allusion to bodily form’. The base materials of her works are extremely fragile and include brown paper, sugar paper, cellophane, glass and polyethylene, whilst other materials like chalk and plaster dust, petroleum jelly, hair spray and other cosmetics, are used to cover the surfaces. Her mixed media sculptural installations involve an intense physical process of creation, which adds a performative element to her work. The site-specific works are usually large scale, an aspect that is in deep contrast with their fragility of form. Such contradiction is also present in her interpretation of a pivotal influence on her work: the impact of feminism. Black accepts the achievements of 1970s feminism, whilst at the same time questioning the stereotypes of male and female activity that feminism has deconstructed. This contestation of gender roles is already visible in her work titles, such as ‘Opportunities for Girls’ (2006) and ‘Home Rule’ (2007). Black’s work embodies the ephemerality of life and has often been discarded after exhibitions, as was the case with ‘Push Push’ (2004). The materials of her work transport the viewer into the mundane domestic world, but the way in which she deconstructs and handles such materials is suggestive of deeper layers of meaning, where objects and events become symbols. Black was nominated for the Turner Prize in 2011 and had a solo exhibition at the 54th Venice Biennale. In 2013, the Institute of Contemporary Art (ICA) in Philadelphia held her first solo exhibition in the United States, featuring a multi-part sculpture entitled ‘Practically in Shadow’ (2013). 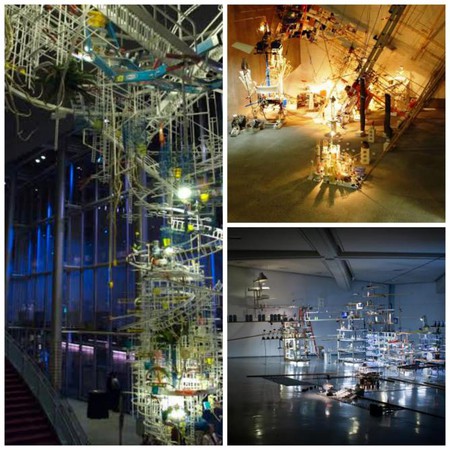 Sarah Sze creates ephemeral sculptural installations that blend with the exhibition space, either penetrating walls, suspended from the ceiling or burrowing into the ground. Her intricate site-specific installations – a communion between painting, sculpture and architecture – manipulate the space in which they are created, thus affecting the way it is perceived. Sze’s work derives from her formal interest in light, air and movement coupled with her intuitive understanding of color and texture. Her installations are made of countless everyday objects combined harmoniously into compositions that are often monumental in scale.

From cotton buds and tea bags to water bottles and ladders, light bulbs and electric fans, these ordinary elements become leftovers or traces of human behaviour and human life. Lifted from their common context, these objects acquire a new life and purpose. In an interview with The New Yorker, Sze revealed that the mass-produced materials she uses are purchased new: ‘I’m not interested in the romance of detritus. I don’t like objects to have a history.’ This is true with the exception of some personal mementos and local souvenirs hidden in her works. In 2013, Sze represented the United States at the 55th Venice Biennale and, as GalleristNY commented, she ‘transform[ed] it [the US pavilion] from a venue for the heroic display of art to a laboratory for art’s creation’. The exhibition was entitled Triple Point – named for the three states in which a substance such as water can exist: solid, liquid and gas. Once again, Sze was able to blend art with the architectural context, establishing a new relationship between the viewer and the space. 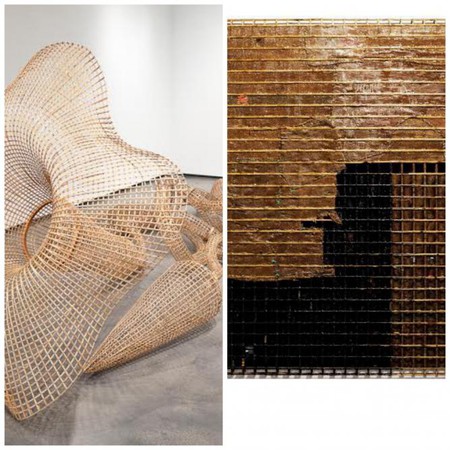 Widely considered to be Cambodia’s most prominent contemporary artist, Sopheap Pich creates sculptures with indigenous materials and traditional weaving techniques that examine socio-political issues in contemporary Cambodia. Pich left Cambodia at the end of the Khmer Rouge reign and settled with his family in the United States, where he pursued an art education. The memories of his childhood in Cambodia and his desire to reconnect with his home led him back to Cambodia in 2002, where he now lives and works. Pich’s sculptures use local materials such as bamboo, rattan, burlap from rice bags, beeswax and earth pigments, resources that are widely available and used in a variety of ways in Cambodia. His sculptural works address issues of time, memory and the body and often relate to Cambodia’s history and struggles, with a particular focus on Pich’s recollections of his life during the Khmer Rouge period (1975-79). His oeuvre is rich in references to Cambodia’s tradition and culture, reflecting on the contradictions of contemporary life in a country where tradition and modernity often clash. His experiences of 1970s Cambodia have had a long lasting influence on his favored themes of survival, family and basic human relationships. Pich has exhibited internationally in important institutions and biennials. His latest installation ‘A Room’ (2014) was recently showcased at the Indianapolis Museum of Art. His iconic sculpture ‘Morning Glory’ (2011) was part of Guggenheim’s UBS Map touring exhibition No Country: Contemporary Art For South and Southeast Asia and is part of the Guggenheim’s permanent collection. 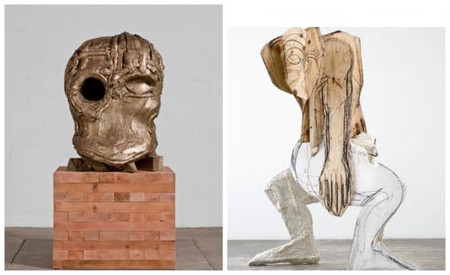 Thomas Houseago creates monumental, often figurative sculptures that simultaneously convey states of power and vulnerability. His works combine unusual materials like steel rods, concrete and hessian with classical and modernist sculptural materials such as carved wood, clay, plaster and bronze. Houseago’s works feature flat proportions and hand-drawn motifs cast and printed onto the sculptures. His body of work makes references to popular culture and applies a vanguard approach to the human body as the subject of sculpture. Drawing from the traditions of Classicism, Cubism and Futurism, Houseago creates sculptures that border on abstraction, while representing the human form in clumsy compositions that recall mythological creatures, such as in his 2013 show As I Went Out One Morning at Storm King Art Centre.

Appearing imposing in their monumentality, his sculptures reveal vulnerability visible through their fragmented construction, giving the impression of the artwork remaining incomplete. Houseago explains to FT that ‘sculpture has a long and intimate relationship to performance’. An apparently unfinished work draws attention to the process of creation and to the artist’s relationship with the materials. His sculpture shown at the Whitney Biennial 2010, ‘Baby’ (2009-2010) – made of Tuf-Cal plaster, hemp, wood and charcoal – looks like a monstrous anthropomorphic creature, half-sculpted and half-drawn, deconstructed and unfinished. For the artist, the work represents a hopeful ‘beginning’. Houseago’s oeuvre engages with notions of the human body and is a monument to ‘authentic human experience’, in an era where we are bombarded by stereotyped, stylised images in magazines, on TV and in films.