Cambodia’s once-vibrant cultural life was all but destroyed by decades of conflict and brutality under the Khmer Rouge regime. But since the 1990s, the capital Phnom Penh has slowly rebuilt its artistic spirit, drawing from a new sense of optimism brought on by Cambodia’s rapidly changing society. The contemporary art scene in Phnom Penh is now defiantly pulling away from the ever-popular traditional mainstream and expressing its raw creativity. 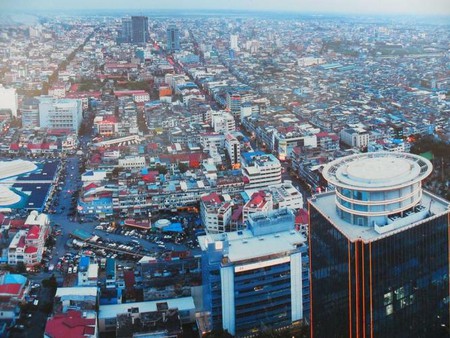 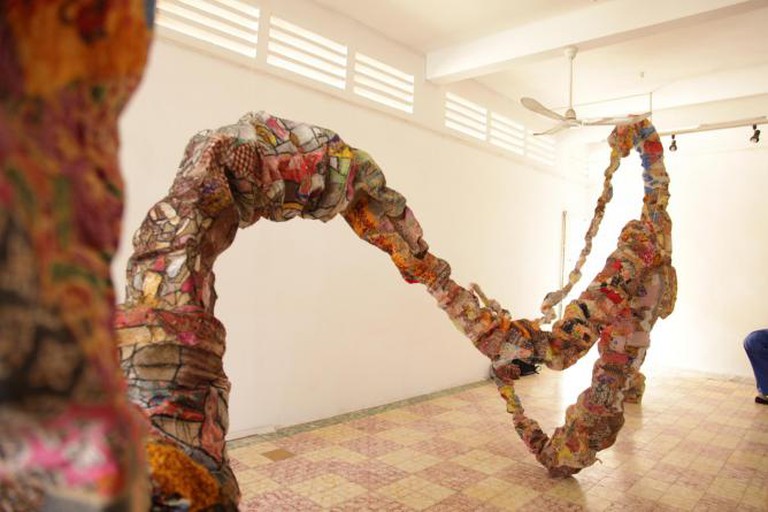 Digestion (installation), Srey Bandaul, 2013 | © Romeet Contemporary Art Space
Romeet is a dynamic visual arts gallery on Street 178 near the National Museum and Royal University of Fine Arts, an area known as ‘Art Street’ for its many galleries and artisanal shops. Romeet is among the few galleries that specialise in progressive, contemporary art and promoting up-and-coming Cambodian artists. Opened in 2011 by Phare Ponleu Selpak (PPS), the NGO supporting arts education, Romeet acts as a space for exhibitions, educational talks, workshops, artistic collaboration and exchange. It also exhibits the work of students and graduates from the PPS Fine Arts School in Battambang, one of Cambodia’s largest art schools, providing much-needed opportunities for students from the less cosmopolitan city in the absence of government support for the arts. Come here to check out the future of Cambodian art.
Open In Google Maps
340 Street 178, Phnom Penh, 12000, Cambodia
+85592953567
Give us feedback

Art Gallery
Facebook
Email
Twitter
Pinterest
Copy link
Share
Map View
JavaArts is an organisation that operates out of Java Café, a fabulous café and gallery space in a townhouse overlooking Hun Sen Park. There are regular exhibitions displayed throughout the gallery, with the JavaArts lab next door presenting work by the most exciting young artists working in Cambodia. Supported by the café and gallery, JavaArts is transforming the face of Cambodian contemporary art by working with emerging artists to nurture embryonic ideas and projects. Many of these artists, such as Oeur Sokuntevy and Meas Sokhorn, have since become prominent figures in Cambodia’s art world.
Open In Google Maps
56 Sihanouk Blvd, Samdach Preah Sihanouk Boulevard, Khan Chamkar Mon Phnom Penh, Cambodia
+85512833512
Give us feedback

Sa Sa BASSAC is a gallery co-founded by curator Erin Gleeson and an artists’ collective called Stiev Selpak, the Art Rebels, and made up of two art spaces: Sa Sa BASSAC and Sa Sa Art Projects. At Sa Sa BASSAC, exhibitions are organised alongside public programmes and collaborative curatorial projects, all with a view to promoting emerging and established Cambodian artists. Sa Sa Art Projects was established nearby as a much-needed non-profit, artist-run space that could be used by emerging artists for experimental practices. The space was founded in 2010 in The White Building, a dilapidated apartment block, which is part of the historical Bassac River Front cultural complex and home to a vibrant community of 2,500 residents. By setting up in The White Building, Sa Sa Art Projects is able to engage the community in art projects and activities, which are occasionally open to the public during special events. 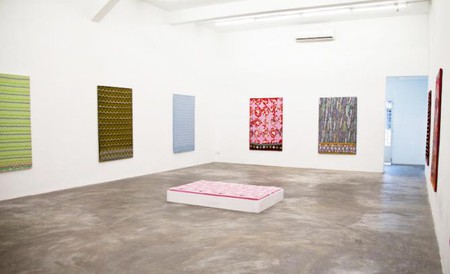 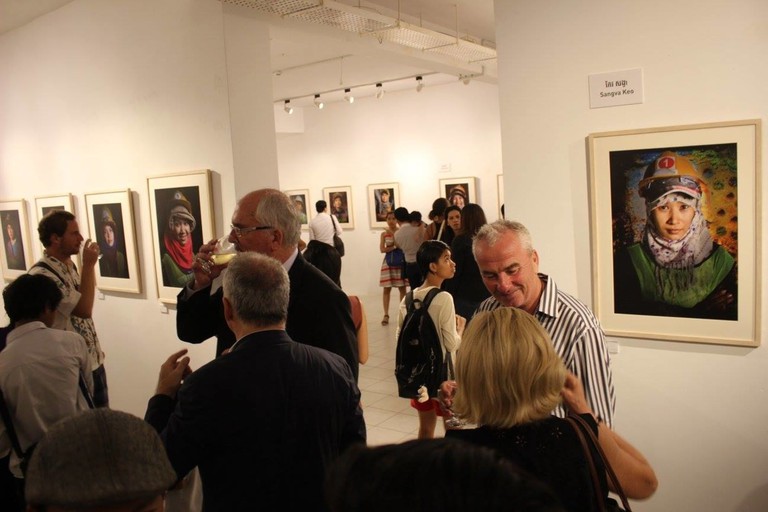 Institut Français du Cambodge hosts many exhibitions | © Institut Français du Cambodge
In 1992, the Institut Français du Cambodge (IFC), then known as the Centre Culturel Français, was the first art centre to reopen in Cambodia after decades of cultural stagnancy brought on by civil unrest in the country. More than twenty years later, the IFC remains at the forefront of the developing arts and culture scene, with regular exhibitions, tours and festivals promoting Cambodian and French culture in all their forms. With a broad range of activities, such as screenings of classic French films, musical performances and cabaret karaoke, often facilitated or hosted by partner institutions, the IFC has a lot to offer for the cultural omnivore.
Open In Google Maps
218 Street 184, Phnom Penh, Cambodia
+85523213124
Visit Website
Visit Facebook page
Give us feedback 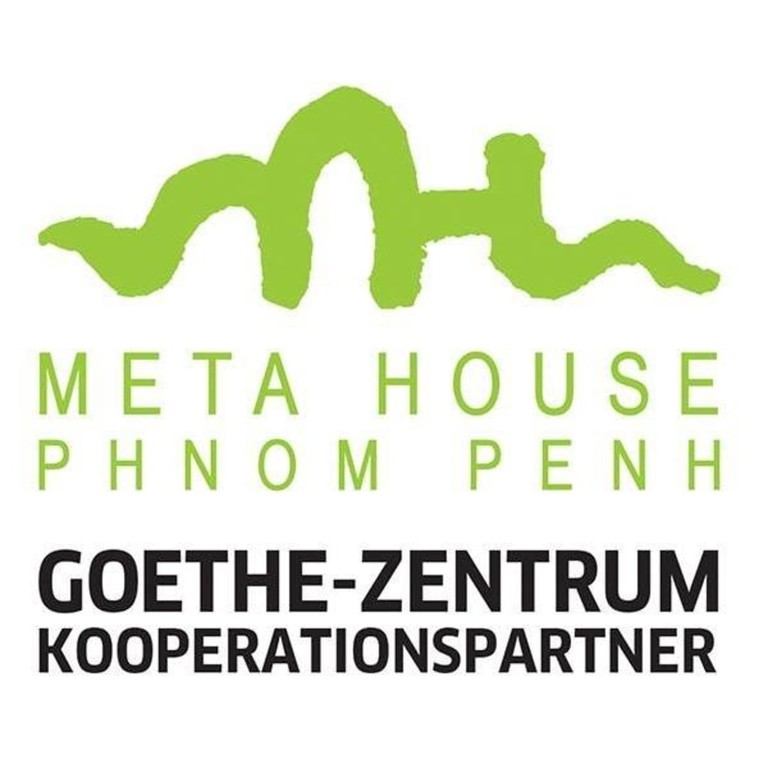 Meta House | © Meta House
META HOUSE is a large art gallery and media centre in the heart of the city, opened in 2007 by German filmmaker Nico Mesterharm in association with the International Academy at the Free University of Berlin. There are more than 200 square metres of exhibition space in the three-storey building, hosting local and international artists, community projects, residencies and workshops. The rooftop is home to an open-air media lounge, equipped with multiple screens, showing a range of cutting-edge video art, documentaries and films. Through its links to organisations and universities from across the world, as well as artist exchange programmes, META HOUSE seeks to elevate Cambodian art to the world stage. In this exciting time of experimentation and growth, META HOUSE is leading the way.
Open In Google Maps
37 Sothearos Boulevard, Phnom Penh, Cambodia
+85523224140
Visit Website
Visit Facebook page
Give us feedback

National Museum of Cambodia | © National Museum of Cambodia
The National Museum of Cambodia is a temple to the nation’s heritage as the country’s largest archaeological and cultural history museum and home to many of the nation’s ancient treasures, some dating back to the 4th century. The magnificent red sandstone building, built in traditional Khmer style in 1920 by George Groslier, the famed historian and the museum’s first curator, is an attraction in itself. The museum houses one of the largest collections of Khmer artefacts in the world, including sculpture, ceramic and ethnographic objects. Spending a couple of hours here is a good introduction to Cambodia’s long tradition of art and creativity, and a brief insight into the spirit of the kingdom.
Open In Google Maps
Preah Ang Eng St. (13), Khan Doun Penh Phnom Penh, Phnom Penh, Cambodia
+85523217643
Visit Website
Give us feedback

Art Gallery, Museum
Facebook
Email
Twitter
Pinterest
Copy link
Share
Map View
Located opposite the National Museum since 1999, the Asasax Art Gallery displays the unique and striking work of Cambodian artist Asasax, an alumnus of the School of Fine Arts in Phnom Penh. His work is a bold, modern take on traditional Khmer Art, which makes for vibrant and colourful representations of the Angkor Temples and Apsaras. The artist’s preoccupation is experimentation with colour, as revealed in his artistic motto, ‘Without colour, people die’. This gallery is well worth a visit to see a beautiful clash of old and new Cambodian art. A second gallery space was opened in Siem Reap in 2002.
Open In Google Maps
#192 Street 178, Opposite the entrance of the National Museum, Phnom Penh, Cambodia
+855012877795
Give us feedback

The Bophana Center is the sole institute in Cambodia dedicated to preserving the audiovisual heritage of the nation. The centre was co-founded by Cambodian filmmakers Ieu Pannakar and Rity Panh (who received Cambodia’s first ever Oscar nomination in January 2014 for his animation The Missing Picture) to try to piece together what was left of the nation’s audiovisual records after years of war, and to inspire and train future generations of filmmakers and photographers. This is done through the archiving of an ever-expanding film, sound and photography collection, which is freely accessible to the public. The centre’s varied programme includes documentary photography exhibitions, film screenings and performance art, organised in a bid to engage the local community. 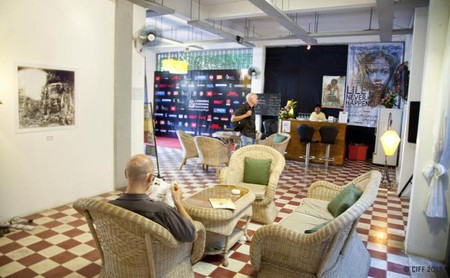 XEM Design Gallery is run by the well-known Cambodian artist and designer Em Riem, whose work has been shown across Europe and the USA. After studying and working in Cambodia and Paris, where he attended the prestigious Parisian institutions Saint-Etienne Ecole des Beaux-Arts and the Ecole Nationale Superieure des Arts Decoratifs, Em Riem opened his gallery in 2008 to exhibit his artwork. The range of his work is impressive as he experiments with everything from realism to abstract and street art, and works with paint, sculpture and ceramics. A recurrent theme is the devastation wrought by the Khmer Rouge regime, informed by his first-hand experience. Come here to see some of the most sophisticated and diverse art on the scene.