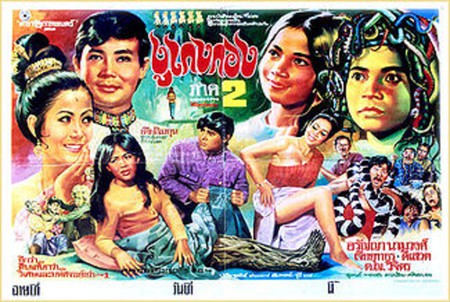 A quick flick through the bill at any cinema in Cambodia will reveal the country’s obsession with horror films. Independent cinemas are full of locally produced horrors, while larger multiplexes are showing international box-office gore-fests on the big screen alongside frighteners from Cambodia and neighbouring Thailand. Here’s a look at the history behind the country’s fascination with all things that go bump in the night.

As a general rule, Cambodians are very superstitious people. Spirit houses to protect homes from ghosts can often be found guarding the entrance of many houses and businesses. Ancient legends and folktales are littered with references to spirits and ghosts, and one of the country’s most important religious festivals is Pchum Ben, or Ancestors’ Day.

Usually falling in October, the 15-day celebration is reserved for remembering the past seven generations. It’s believed that for seven days each year, trapped spirits unable to move onto the next life return to Earth hungry. It is only by satisfying their hunger that they can pass on.

With the country’s film industry thriving during Cambodia’s Golden Age of the 1950s and 60s, fuelled by King Sihanouk’s producing skills, it was in the early 70s that the genre of horror first captured Cambodians’ imaginations. Pous Keng Kang (The Snake King) by Tia Kim Kon was the film that spawned those that followed, shooting to fame when it was released in 1970 – and remaining a household hit across the country today.

Based on a local legend about a snake goddess, The Snake King stars iconic actress of the era, Dy Saveth, alongside Chea Yuthon. Chea went on to become popular in Thailand, where the film was well received, in its wake. Its success triggered a series of sequels, including The Snake King’s Child, a Thai-Khmer joint retelling of the original, in 2001.

When the Khmer Rouge came into power in 1975, all signs of the arts were destroyed, including cinema. But as the country started to rebuild itself after the war, film returned, with the appetite for horror still intact.

By the early 2000s, the horror movement was making a resurgence, with filmmakers looking towards Japan and South Korea for inspiration. Common themes today include ghost hauntings, folk mythology, possessions and supernatural revenge. Tapping into the Western style of this genre, many of the Cambodian counterparts also feature over-the-top gore.

In 2005, records were smashed when The Crocodile became the most expensive Cambodian production to date, costing over US$100,000 (£79,000). Based on the reptile’s influence on Khmer culture, the action-horror follows San, whose mission is to save villages from the jaws of a deadly crocodile.

The Haunted House was released the same year, proving another hit in cinemas. Preying on the fears caused by local legends, the plot is based on a myth about a large, derelict house made of black wood, which is located on National Road 5 in the Kampong Chhnang province.

The year 2013 saw Cambodia move into new realms when the country’s first zombie film was released in the form of Run. Set in the capital of Phnom Penh, the story follows a group of young friends caught up in the aftermath of a strange virus that spreads across the country, transforming all those in its path into bloodthirsty zombies.

With horror remaining a firm favourite in Cambodia, enjoying a fright night at the cinema could possibly join your list of things to do.