In Cambodia in the 1970s, 80s and 90s, countless artefacts and statues were plundered from the country’s historic sites to be sold to museums and private collections in the West. However, recent months have seen three pieces returned to their home country following lengthy legal battles with auction houses, which critics say have knowingly traded in stolen goods. Samuel Spencer investigates these statues and what their return means for the West’s museums. 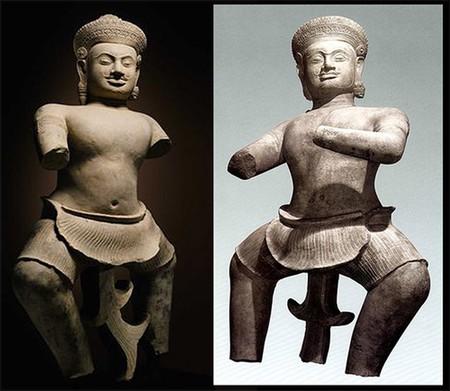 The 80km or so that surrounds the UNESCO World Heritage Site of Angkor Wat is an area heavily populated with historic temples, mostly built in the 10th Century during the Koh Ker dynasty. What made these temples notable was their sculpture. Built from sandstone, these statues are known worldwide for their sophistication and their often colossal sizes. Many visitors to Washington, D.C’s Metropolitan Museum, for example, will remember two such imposing statues which until they were recently returned to Cambodia stood at the entrance to the museum’s Southeast Asia exhibition. They are, quite simply, masterpieces of world and religious art. 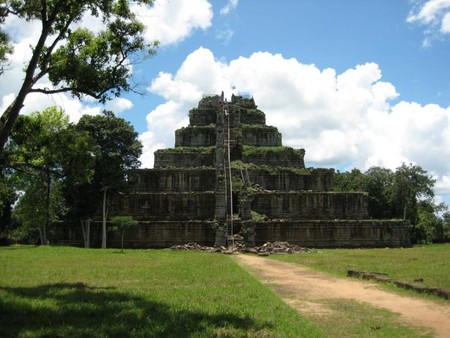 However, in the eyes of temple raiders such as those who removed the statues from their original locations, circumstances made them a very lucrative and tempting source of income. Firstly, the ongoing civil war between the established government and the Communist Khmer Rouge in the late 1960s and early 1970s created an air of confusion and chaos that made such mass-scale pillage easier. Secondly, the majority of the temples (particularly the Prasat Chem northeast and Koh Ker northwest of Angkor Wat) were found in the middle of dense jungle or forest, giving the operations cover and camouflage. When these two factors came together, it became almost inevitable that these statues would begin to turn up in the auction houses of the West.

And turn up they did. To take recently returned statues as an example, the Norton Simon Museum of Pasadena’s statue of the warrior Bhima from the Hindu epic the Mahabharata became available in 1976, with his sparring partner Duryodhana auctioned in London the year before and also bought by the museum. And so they stood, until a hugely momentous decision was made in 2013 in the Met which could have massive ramifications not just for Cambodia but for contested masterpieces the world over. To put it simply, the Met decided to give their Khmer statues back.

To put into context how unprecedented this situation is, consider the fate of the Parthenon Marbles in the world’s second most visited museum (beating the Met into third place), the British Museum in London. Although unlike in the Cambodia case there is no decisive proof of theft, many pressure groups question the legality of the Lord Elgin’s acquisition of these sculptures, and debate about whether they belong in Athens or London has raged for decades. However, the British Museum remains unequivocal that they are now the rightful owners of the marbles, with the director Neil MacGregor stating that ‘the Elgin Marbles are no longer part of the story of the Parthenon. They are now part of another story.’ In light of this, a standard position held by many museums, the Met’s decision is shocking.

What is more, the Met’s decision has already had implications on the rest of the Khmer statues located in the United States. The first return set a precedent which has not only led to the court-enforced removal of the statues in Pasadena, but also has brought about a worldwide hunt for the remaining three statues, as yet unidentified. Scholarly opinion has stated that these statues were all stolen by the same organisation, and with each legal victory it becomes easier to track down the remaining sculptures, so as to house them in their own dedicated museum in Cambodia.

A criminal organisation stealing priceless artefacts, a story that sweeps across Europe and America, a war-torn country…it really does sound like the stuff of epic cinema, perhaps the nearest real life will ever get to Lara Croft or the Raiders of the Lost Ark image of brave tomb raiders. However, unlike in the movies this real life tomb robbery has an impact more wide-reaching than the courageous archaeologist getting the girl and defeating the bad guys. After all, if public and legal opinion has decided that it is right for the Cambodian statues to be returned, then we must surely look back in time over the centuries of colonial theft that have given the museums of the western world some of their greatest artefacts.

Admittedly, the Cambodia case seems more striking because it is so recent, but we must ask ourselves what is the difference between the stealing of the Khmer statues and the mass pillaging of Egypt in the early 20th Century, with so many items taken out of the country that mummies were genuinely used as fuel for a number of years. Some items have been returned (such as the body of Tutankhamen), but all major museums still have fairly heavily stocked Egyptology departments. In fact history can sadly be defined as a series of pillagings from one civilisation by another. If the Cambodia statues are to be returned, how far back do we have to apply the same mindset?

Admittedly, the Cambodia statues are more likely to be an isolated incident in the heritage industries, with older pillagings being harder or even impossible to properly prove and leaving some museums almost completely empty. However, the Cambodia precedent is still well worth keeping updated with. Bringing these behemoth statues back together in Cambodia will make for an awe-inspiring site, giving an understanding of the relations between these works impossible to ascertain when they were divided across the world.