The shocking custom of the chbap srey, or ‘women’s law’, still influences contemporary life across Cambodia. But as the country rushes towards modernization, young female artists are directly questioning women’s traditional role in society and expressing their outrage. Discover their art that is both a political statement and a social outcry. 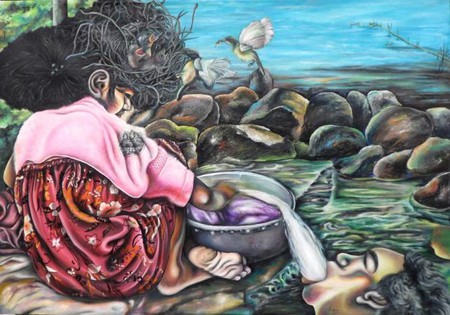 Oeur Sokuntevy, 2013 | Courtesy of Java Arts Gallery and the artist

‘From infancy she is trained to be different from a boy. A nice girl is one who makes no sound when walking on a wooden floor.’

Generation to generation, Cambodian women have been instructed in the ways of the chbap srey, or ‘women’s law.’ A comprehensive set of edicts on idealized femininity, the chbap extols virginity, obedience and decorum: a woman who sleeps with her back to her husband is akin to a snake; one who laughs within earshot of her neighbors brings bad luck upon the household. Only recently dropped from the curricula of Cambodian schools, the chbap prizes silence and modesty above all. Contravention of these idealized notions of femininity could, until recent years, bring about direct and dire consequences.

Contemporary artist Oeur Sokuntevy is all too aware of the limitations placed upon women by the chbap srey. “When I had my first exhibition, no one in my family supported me. They thought that being a good girl was better – learning to cook, sitting in the right way, not laughing too loud. So many times I was told, Stop laughing so loud. Remember the chbap srey.”

But Cambodia today is developing with a rapidity almost unimaginable in previous decades, and alongside this rush towards modernization and globalization come changes in attitudes to femininity. Oeur, alongside the increasing number of women artists in the country, form the vanguard of this social shift. Through the style and subject matter of their art, as well as their growing commercial success, Cambodia’s female contemporary artists are challenging the traditional perception that women should be seen rarely, and heard even less. 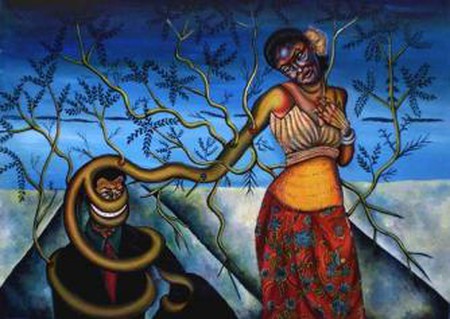 The art of independence

Oeur’s representations of modern Cambodian womanhood bear witness to these changing attitudes, giving a female perspective on sexual experience, which can be discomforting in its unblinking honesty. Her series Love to Death typifies this frankness: one work shows a man, his heart emblazoned on his chest, pleading for his lover’s forgiveness as she turns her back, unforgiving; in another, a sinewy female figure mounts her lover, machete in hand. Intimacy or aggression? Either way, the paintings’ depictions of femininity are a far cry from the submissive ideal of the chbap srey.

“I paint what is happening here,” says Oeur, who has been a professional artist since 2006. “I’m sure most Cambodian girls are not virgins, but they think they shouldn’t talk about it. So I decided to show it out freely. We are free to say these things.”

She is not the only artist driven to challenge the constrictions of the chbap. “Sometimes I feel like I’m in a box,” explains Tes Vanna, a contemporary of Oeur’s. “I use my art to be independent from those boxes, from tradition and culture.” Working with the stereotypically masculine medium of steel, Tes uses acid to corrode her metal sculptures: the resultant installations are potent metaphors not only for the artist’s internal conflicts, but for contemporary Cambodian womanhood as a whole. “For me metal is strong, but it can also be easily damaged or changed by things, like acid. No matter how strong I am society can affect me. I’m talking about culture, I’m thinking about how Cambodian women are affected.” 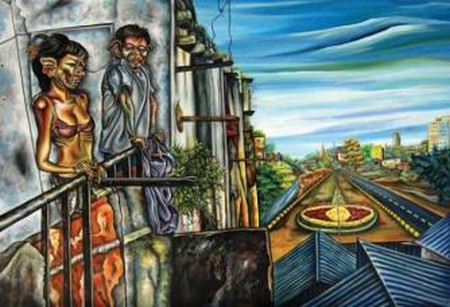 The artist as public/private woman

Tempting as it may be to see female artists such as Tes and Oeur as indicative of a sea-change in the social status of Cambodian women, Dana Langlois, Java Arts Director and long-time supporter of female contemporary artists in the Kingdom, counsels against such glib presumptions. ‘The Western perspective can be problematic. There’s an assumption that because women are at home they’re not considered equal. But they run the businesses, the control the money; in reality they hold they have a lot of power in the family and social structure, and it’s not always obvious from the outside. Then again, there’s the chbap srey, which is shocking at times.”

The ability to make art which pays the bills undoubtedly contributed to the growing acceptance of women who make art. Both Oeur and Tes cite economic factors as crucial to their families’ acceptance of their careers. “When they stopped me studying art I had nothing in my life,” confesses Oeur. “Now they still don’t understand what I do, but they know I can earn and support myself.”

Cambodia scholar Joan Kraynanski acknowledges this long-standing conflict between the public and the private woman. ‘Cambodian women have been conditioned to be content to have value in the private sphere, the family unit, but to walk quietly in the public sphere.’ But in a country experiencing such rapid social change, norms of sexuality and gender inevitably come under scrutiny. Cambodian women, particularly those in urbanized areas, are embracing the opportunities brought about by modernization, becoming increasingly visible in traditionally ‘male’ spheres such as politics and big business. 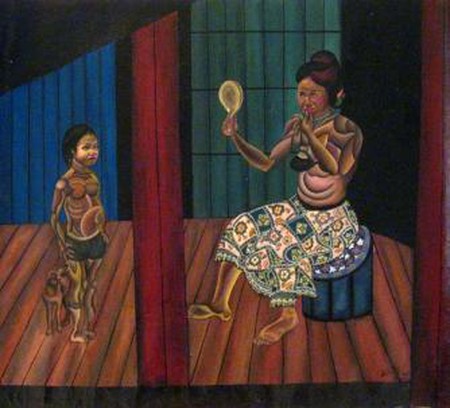 Oeur Sokuntevy | Courtesy of Java Arts Gallery and the artist

The returning Cambodian diaspora also contribute to this social change, bringing with them globalized notions of women’s status into the country. Khmer-born, Chicago-raised performance artist Anida Yoeu Ali uses her work to examine conflicting identities – exile, refugee, ethnic minority, woman. Her current performance piece, The Buddhist Bug, sees the artist take to Phnom Penh’s streets cloaked in 30 meters of saffron, part monk, part insect. “This fantastic creature is meant to provoke obvious questions of identity. Who is s/he? What is s/he doing here?” Ali says. “The Bug is gender neutral.” In questioning ideas of identity and gender, diasporic artists such as Ali influence perceptions on the possibility of women creating their own narratives through contemporary art.

Nevertheless, the memory of the chbap srey still runs deep: women who wish to become professional artists often face pressure to marry or choose more socially acceptable vocational paths. Now, the next generation of female artists are navigating the tumultuous waters between adherence to the chbap and the urge to express their experiences of womanhood. Koeut Linda, an arts student who cites Oeur as an inspiration for her work, uses cubism as an expression of the complexity of her life as both woman and artist. ‘It’s almost like a game. Cubism makes people think harder, but it also allows me to express complicated feelings in different ways.’

Despite the implicit and explicit challenges these women throw down to the chbap srey, they all baulk at the label ‘female artist.’ Langlois attributes this to a reluctance to be seen as some sort of sub-category in the wider spectrum of Cambodian art. Oeur, unsurprisingly, is blunter in her explanation: “Male, female, whatever. You’re still an artist. What young female artists have to do now is open their minds, open them from tradition. Ask for something more than they give you in the chbap srey.”