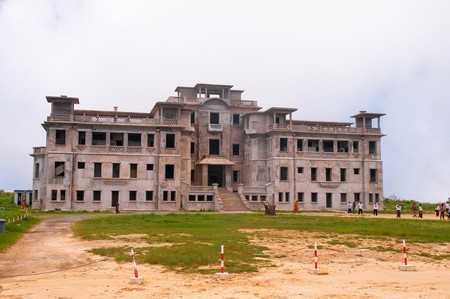 The ruins of the Palace Hotel and Casino at Bokor Hill Station. Copyright: svetlana eremina/ shutterstock-com

Once a resort for French colonialists before becoming a getaway for Cambodia’s elite, then a hideout for the Khmer Rouge, the abandoned Bokor Hill Station today stands as a reminder of the country’s fall.

Perched atop Bokor Mountain, which provides a dramatic backdrop to the tranquil riverside town Kampot, sits the remnants of Cambodia’s glory days.

An eerie ghost town marks what was once a thriving retreat for those who could afford it: the skeleton of a sprawling hotel and casino – the lost luxury evident in the lofty rooms, spacious terraces overlooking the Gulf of Thailand and a grand ballroom – a crumbling church and abandoned royal residencies all harking back to a time of decadence.

Initially designed as a resort for the French during the early 20th century, thanks to its elevated heights offering a welcome reprieve from the humid heat below and sweeping views across the country, sea and beyond, Bokor Hill Station opened in 1925 after almost nine months of intense labour, which saw an estimated 1,000 men die.

At its centre sat the Palace Hotel and Casino, which was often booked out by Europe’s rich and famous. Parties and dances would carry on into the early hours, with laughter and chatter ringing through the surrounding jungle.

However, the colonialists’ high life was to be short-lived. When Cambodia gained independence from France in 1953, the town was quickly abandoned. Cambodia’s upper class were quick to replace the French, with Bokor thriving during the country’s heyday of the 1950s and 1960s – dubbed the Golden Age.

By 1972, the Khmer Rouge had taken a firm grip on the surrounding countryside – which sits close to the border of Vietnam – with soldiers hiding out in the mountainous, rugged land. Bokor found itself abandoned by the rich for a second time. As Pol Pot’s regime strengthened, in 1975 the Khmer Rouge took over Cambodia, leading to an estimated two million people being killed or dying of starvation and exhaustion. 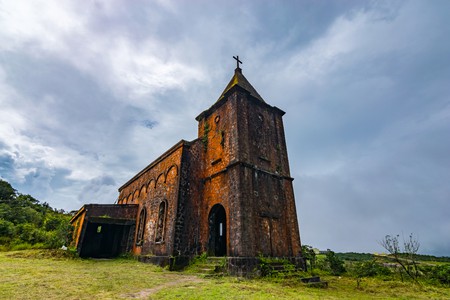 Inevitably, Bokor was left to wither. Because of the vantage points it offered, its remote location and proximity to Vietnam, it remained a Khmer Rouge stronghold until the early 1990s, with pockets of soldiers seeking refuge in the isolated area.

As peace and stability spread across Cambodia, Bokor Hill Station saw something of a resurrection, with tourists trickling back up the mountain to discover the remnants of a bygone past. Despite their dilapidated state, the empty buildings remain intact and are open for visitors to explore. 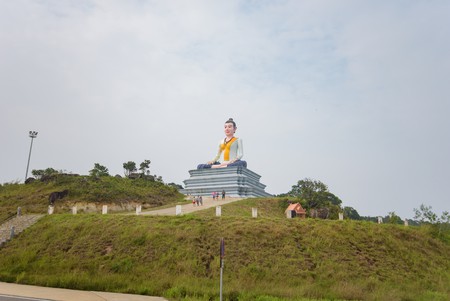 Smooth roads snake up the mountain, making the 42km drive from Kampot popular with bikers – helmets must be worn on the way up – and there are several interesting stops on the journey, from the giant female Buddha statue half-way up the mountain to the Popokvil waterfall, which is best viewed during monsoon season when it gushes through the landscape.

Offering a great day out, a trip up Bokor Mountain is a must to catch a unique glimpse into Cambodia’s glory days, tainted by its horrific past, and coupled with great views and a refreshing temperature.