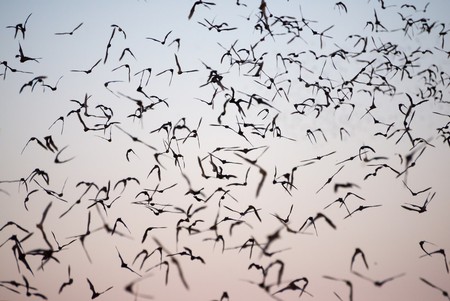 It’s something of a spectacle sitting at the foot of Battambang’s Phnom Sampeou, the sun sinking into the horizon as a stream of millions of bats pour from caves and zoom into the sky. Here’s all you need to know about Cambodia’s bat caves.

A crowd gathers at the base of historic Phnom Sampeou, which sits about 12km from Battambang [pronounced Battam-bong] city. Street sellers flog drinks to the crowd from their orange coolers, while the scent of barbecued chicken and pork floats from the food carts that dot the site.

A mounting sense of excitement sits in the air as the light is slowly teased from the sky. And then suddenly a gasp, followed by a chorus of gasps as out of one of the larger caves that scar the mountainside, a sudden stream of black snakes into the sky.

For the next 30 to 40 minutes, this spectacle continues as the bats rise from their slumber and burst from the network of caves to hit the surrounding countryside for a night of hunting. 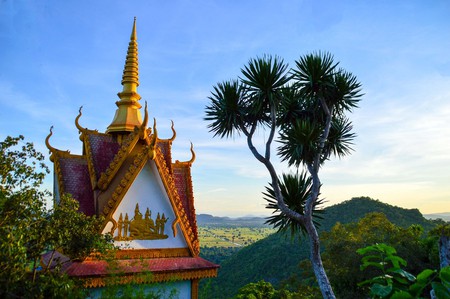 The best spot to catch this is obviously at the entrance to the caves, which is where you’ll find the most people, with the spectacle kicking off from about 5.30pm.

Thankfully, Battambang isn’t yet teaming with tourists so the crowds remain relatively small and finding a viewing spot is still easy without having to arrive hours ahead of time. Plus, stallholders put out a handful of plastic chairs for punters to kick back on.

It’s also easy to avoid any crowds at all – if you can cope with a bit of a climb. Ask your tuk tuk to take the first left on the track leaving the bat caves. Soon you’ll hit a huddle of tuk tuks at the side of the road, marking where a small path leads up the mountains. A short climb up affords a great spot to enjoy the sunset to one side and the bats to the other. 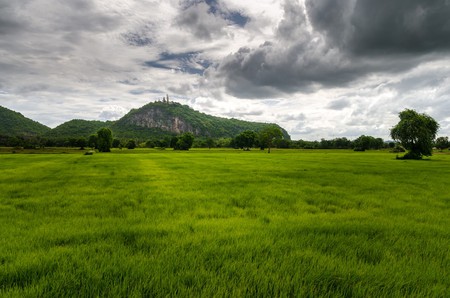 To get another perspective, leave the caves a little early and head back to Battambang. Ask your tuk tuk driver to stop as soon as you hit the main road after the caves and watch the spiral of bats snaking into the distance from afar.

It’s well worth heading to Phnom Sampeou in the early afternoon and spending some time exploring the site before hitting the bat caves. From the base of the mountain, you can either climb 700 steep steps to the top, or pay one of the moto drivers waiting at the bottom to take you up for $1 – tuk tuks are not allowed.

At the peak sits a delicately-decorated pagoda that affords unparalleled views of the surrounding countryside. Dubbed Cambodia’s rice bowl, Battambang is home to shimmering paddies studded with palm trees that stretch to the horizon. 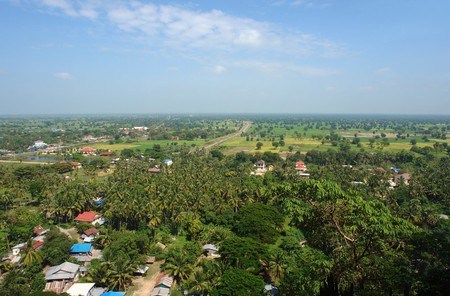 The mountain – more a large hill – is also sacred to locals as it features in the legend of Neang Rumsay Sok. According to Khmer folk lore, she was a jilted by her lover, going on to battle a vengeful crocodile. She managed to defeat the beast by letting her hair down into the water causing the water the reptile was swimming in to dry up.

The site also pays tribute to those who lost their lives in Cambodia’s more recent history. Under the Khmer Rouge regime of 1975 to 1979, some of the caves – dubbed the Killing Caves – were used by soldiers who pushed their victims to death from a hole in the roof. A small monument containing some of the skulls and bones of those who died sits inside the main caves.

The pagoda also served as a prison and torture centre during the Pol Pot-led era, and up until the mid-1990s, government troops camped out on the mountain, with Khmer Rouge soldiers occupying nearby Phnom Krapeu.

With an intriguing history, stunning views and the chance to watch nature work her magic, a visit to Phnom Sampeou and the bat caves is a must on all Battambang visitors’ itineraries.