Wat Phnom | © Lenar Musin / Shutterstock
Modern travellers are increasingly on the lookout for something different to do away from the madding crowds. With that in mind, here are some great alternatives to avoid Phnom Penh’s mounting tourist traps.

Head to Street 308 instead of Riverside

The Riverside – or Sisowath Quay – is home to a lively collection of bars, restaurants and cafes that overlook the Tonle Sap and Mekong rivers. In the evening, these quickly fill up with tourists and trying to push through the touts selling anything and everything along the long stretch of street can become tiresome.

If you prefer getting something to eat and drink away from the masses, then head to Street 308. In the last few years, this road has transformed from a nondescript back street into a lively lane packed full of bars and restaurants. Bassac Lane, which sits off Street 308, is also home to a delightful collection of boutique bars and eateries. 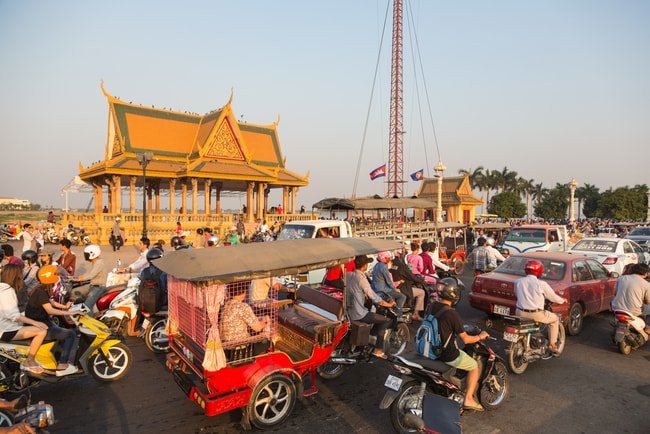 Try Jet’s Container Market instead of the night market

Many tourists head straight to the night market at the north end of Riverside. However, a better alternative is Jet’s Container Market, which has captured the imagination of Cambodia’s youth since opening in 2017. The market features more than 224 stalls – all in converted shipping containers – that take in a range of restaurants, bars and stores selling clothes, gadgets, music and other items. Live music can also be found but be warned, at weekends it can get pretty crowded.

Market
Parking chaos sometimes occurs at Orussey Market  | © Elzbieta Sekowska / Shutterstock
Russian Market, or Toul Tom Poung, has firmly planted itself on the tourist trail, with visitors to the city heading straight there to bag a bargain. While proving popular with tourists means the market is easier to navigate and cleaner, it no longer presents visitors with an authentic Cambodian market experience – and, of course, there’s the fact that prices are hiked up. Instead, head to Orussey Market, which has all the factors a market is supposed to: plenty of people, shouting, pushing and stacks of wheeling and dealing. As the capital’s largest market, here you will find everything you could possibly want, from fresh food, household items, electronics, accessories and clothes. Spread across three floors, expect crowds and chaos, and remember to bring some patience.
More Info
Open In Google Maps
Sangkat Ou Ruessei Ti Muoy, Phnom Penh, Cambodia
+85512667563

Perched atop a 27-metre hill, Wat Phnom holds a special place in the hearts of many locals, with legend claiming the first pagoda was built on the site in 1372 to house four Buddha statues left there by the waters of the Mekong River. They were discovered by Lady Penh, leading to the origin of the capital’s name, Phnom Penh – or “hill of Penh”. This compact site is often on tourists’ radar so if you’d prefer to do something slightly different then jump in a tuk-tuk and head out of town for the day. Set about 30km south of the capital, Tonle Bati is a popular spot with locals seeking some solace. Home to a large lake, visitors can chill in a hammock overlooking the water with some food and drinks, take a stroll around the area and visit Ta Prohm – different to Angkor’s Ta Prohm – and Wat Bati, which date back to 1576. 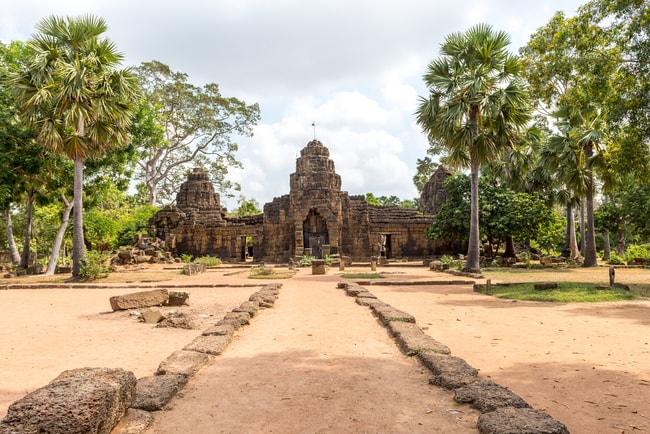 Swap the gym for aerobics at Olympic Stadium

Fitness freaks want to keep in shape regardless of whether they are on holiday or not. For a more local experience, skip the hotel gym or pool and head to Olympic Stadium at about 5pm to take part in the outdoor aerobics classes. The stadium is an architectural feat within itself, designed by revered Khmer architect Vann Molyvan in 1963, and boasts free entry so feel free to explore. Every evening, locals flock to the 84,000-seat outdoor arena to jog around the football pitch, run up and down the steps and join the many aerobics classes led at the top of the arena’s steps. The best part is, it costs between 500 and 1,000 riel. 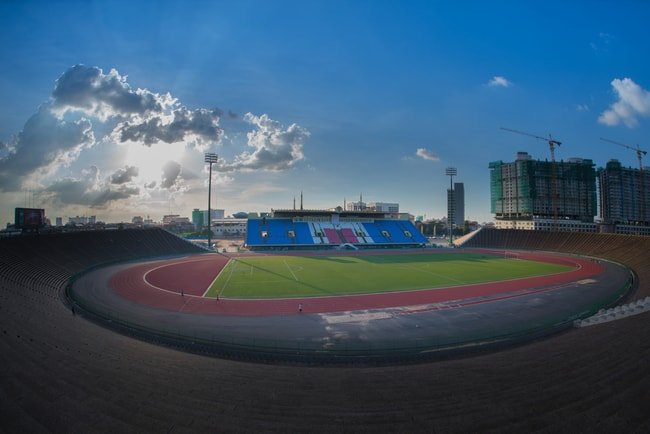 Art buffs will head straight to the stretch of Street 178 between Sothearos Boulevard and Norodom Boulevard, which is lined with independent art galleries and studios. However, shake it up by heading to Street 93, on the former lakeside. This small community has been making a name for itself in recent years as the capital’s street art spot, with the area’s crumbling walls and houses home to a colourful array of murals from both local and international artists. 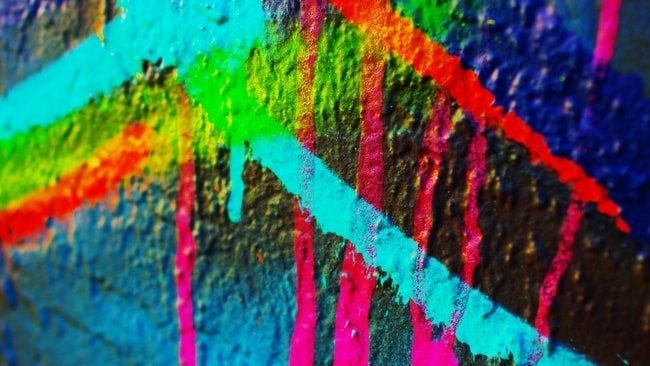 Take an evening stroll on Koh Pich over Riverside

Natural Feature
The fairground at Koh Pich | © Marissa Carruthers
The capital’s riverside is a hotbed for tourists, who head there at dusk to enjoy a few sundowners overlooking the Mekong. Why not head to Koh Pich, or Diamond Island, which sits a 10-minute walk away from the riverside? While the small manmade island may well be on the rise, with construction overtaking Koh Pich – there’s even Cambodia’s own Arc de Triomphe being built there – it remains a popular spot with locals, especially in the early evening. Be dazzled by the lights, sights and sounds at the sprawling outdoor funfair, or kick back with a beer and local food at one of the many eateries that dot the island.
More Info
Open In Google Maps
Koh Pich, Phnom Penh, Cambodia

Swap a generic city tour for one led by locals

There is no shortage of tour companies operating city trips that take visitors on a whistle stop tour of the capital. If you’re after something more, then sign up to one of Khmer Architecture’s tours. Led by local artists, architects and architecture students, the walking tours cover 1960s New Khmer Architecture, such as the Royal University of Phnom Penh (Institute of Foreign Languages), Vann Molyvann’s 100 Houses Social Housing project and Olympic Stadium. The Central Phnom Penh Cyclo Tour takes visitors around the capital’s colonial buildings, as well as modern and post-independence architecture.

Rather than see a show, take part in one

There are plenty of opportunities to watch a traditional arts show, with Cambodian Living Arts putting on a spectacular every evening at the National Museum. To step up your experience, sign up to one of Sovanna Phum Arts Association’s classes. As well as putting on regular shadow puppet performances, with the occasional classical dance and traditional drum show thrown in for good measure, the association also holds classes in the art of shadow puppetry, puppet making, classical and folk dance and traditional Khmer instruments.

Get involved in a show © Again Peace/ Shutterstock.com