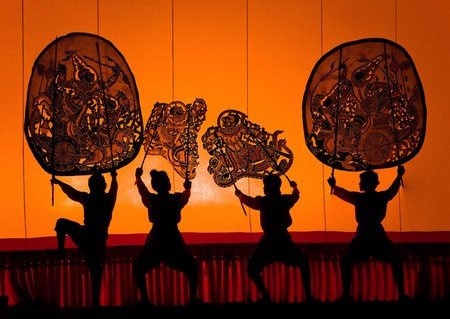 The ancient art of shadow puppetry is an age-old tradition in Cambodia, with its roots stretching back to pre-Angkorian times. Here, we look at its history and where visitors can catch shows.

Shadow theatre has its roots steeped deep in Khmer history, and despite almost being wiped out during the Khmer Rouge, under which an estimated third of the population died and the majority of the country’s artists were targeted, the art form has undergone a resurgence in recent decades.

Today, the most popular forms of shadow puppetry that are performed are sbek thom and sbek thoch. Both use leather puppets to retell age-old tales projected on a white screen that is lit up from behind by burning coconut husks, producing the shadows that the audience sees.

Shadow puppet theatre is in fact a sacred tradition that dates back to pre-Angkorian times, with bas-reliefs from the 7th century Sambor Prei Kuk temple in Kampong Thom showing carvings of the ceremony.

Believed to have been born in Siem Reap, where performances took place in paddy fields or pagodas, performances were traditionally dedicated to the divinities and could only take place on special occasions three or four times a year. These include Khmer New Year, the king’s birthday or the veneration of monks and other important members of the community. 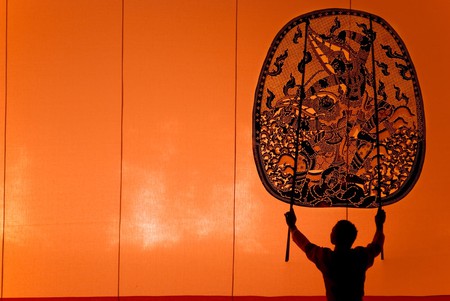 However, after the fall of the Khmer Empire in the early 15th century, the theatre form was adopted as an artistic performance and was commonly performed across the country to entertain, while retaining its rituals.

Sbek thom, which was added to Unesco’s Representative List of the Intangible Cultural Heritage of Humanity in 2008, is the most popular form of shadow puppet theatre, featuring two-metre tall puppets made from large pieces of cowhide to retell parts of the epic Reamker — the Khmer version of the Ramayana, an ancient Indian epic poem.

Even today, rituals must be carried out when meticulously hand-carving the puppets used for performances. The carving process can take up to 20 days. 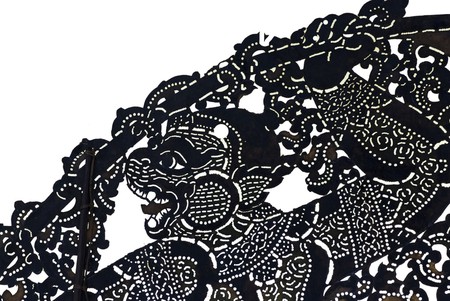 While cutting the characters used in the show, artists must wear white, abstain from alcohol and lead a sin-free life. The leather used must also come from a cow that has died of natural causes rather than being slaughtered.

The hides are coloured with dye from Kandaol tree bark, with artists drawing each figure onto the tanned leather before cutting them out and painting them. Two long bamboo poles are then attached so the performers can handle them.

Shows usually take place in the evening in an outdoor setting to ensure the shadows are at their finest.

A large white cloth is propped up by bamboo poles and a fire is lit behind this scene to help project the silhouettes of the puppets onto the screen throughout the show. An orchestra plays traditional Cambodian music, and there are two narrators.

The traditional version of the re-telling of the Reamker is spread across several nights and uses up to 160 puppets for each performance. However, modern versions retell smaller episodes and last for one or two hours.

Where to Watch the Performances

Sovannaphum Theatre in Phnom Penh puts on a series of shows taking in sbek thom and sbek thoch. It also hosts workshops offering visitors the chance to see how the puppets are made and how performances are put on. Check out its Facebook page for details.

Cambodian Living Arts also holds several shows throughout the year, put on by Wat Bo Shadow Puppet troupe. You can see their variety of shows by visiting their website.