A Guide to Cambodia's Landmines and Unexploded Ordnance 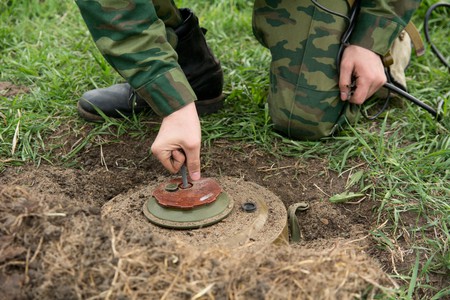 Cambodia is one of the world’s most mined countries, with decades of war scarring the landscape. Huge efforts to clear the country of deadly landmines continue today, with an estimated three to five million explosives remaining underground.

Yor Duob froze when he felt the smooth, cold metal of a 500-pound (226-kilogram) bomb that his net was wrapped around. The fisherman plunged beneath the murky waters of the Mekong River to untangle his net, only to find out that it had become snagged on an American MK82 bomb that had been sitting 7-metres (22-feet) deep in the water for the last 40 years.

After two years of intense training, the world’s first underwater demining team was ready to carry out its lifesaving work and was on hand to safely extract the explosive from the water and secure it — a brave task that Duob and the team continue to carry out today.

The bomb was just one of an estimated 2,000 tonnes (4,409,245 pounds) of munition that litter Cambodia’s waterways, remnants from the 2.7 million bombs the US dropped on the country during the Vietnam War that was raging next door. And these are just the unexploded ordnance (UXO) found underwater.

On land, landmines still litter the country, with the deadly devices extensively laid by the Khmer Rouge, the Pol Pot-led regime which ruled Cambodia between 1975 and 1979, as well as other fighting factions. This practise continued well after the regime’s ousting, until their demise in 1998, with minefields laid along the Thai and Vietnamese borders.

The last few decades have seen huge efforts carried out across the country to rid it of its landmines, with teams of demining dogs and their handlers scouring the country metre by metre. While most urban hubs and tourist centres are free of the explosives, with about 1,700 square kilometres (656 square miles) of contaminated land cleared in the last 25 years, rural areas, especially along the borders, remain dotted with munitions.

It is estimated that about 1,660 square kilometres (640 square miles) of Cambodia are still littered with devices.

With Cambodia aiming to be free of all anti-tank and anti-personnel landmines by 2025, a huge job lies ahead that includes innovative efforts to clear the country. The latest weapon in the war against the munitions has seen African pouched rats imported from Tanzania to help Belgian NGO, APOPO, with its demining work.

APOPO Cambodia claims the rats are safer, quicker and more cost-effective than demining dogs and their handlers. One rat can clear 200 square metres (2,153 square feet) in 20 minutes, compared to the one to four days alternative methods can take.

While explosives remain a serious problem in Cambodia, don’t let this put you off from visiting; the threat to tourists is low. However, it’s still advisable not to step too far off the beaten track, especially on remote stretches of the Thai border, which remain heavily mined.

Visitors can learn more about the country’s landmines, the devastation they cause and the efforts to rid the country of them with a visit to Cambodia Landmine Museum in Siem Reap. Operated by Aki Ra, who has disarmed a swathe of the landmines himself, the museum contains a sobering collection of retrieved explosives, as well as the heart-wrenching stories of amputees and victims.

This is a recommended visit for those wanting to learn more about the problem that may plague Cambodia for many years to come. 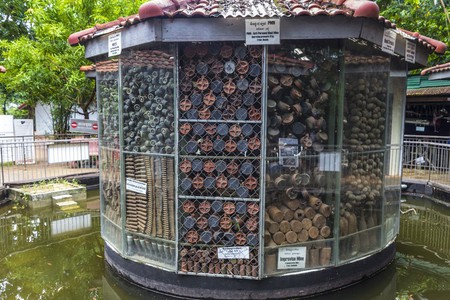 Collection of defused landmines at the landmine museum, Cambodia | © Shaun Robinson / Shutterstock
Give us feedback