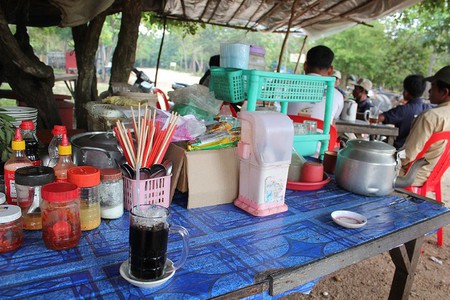 The day doesn’t begin in Cambodia until a large plastic cup – or bag – of iced coffee is consumed to kick-start the morning with an essential caffeine boost. Here’s a brief history of the famous Cambodian iced coffee. 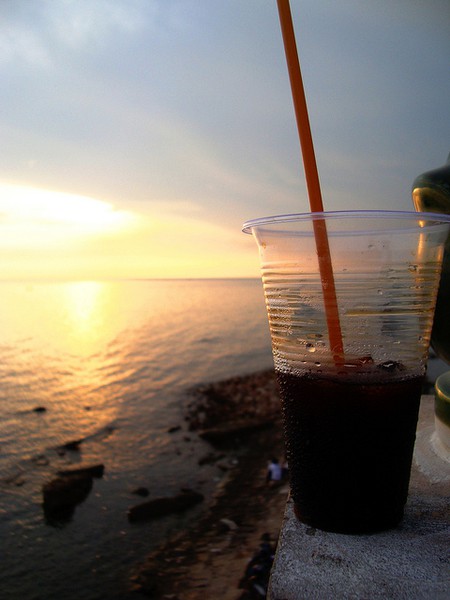 From the bustling roads and side streets of the capital of Phnom Penh to the dusty tracks in villages that dot the provinces, small coffee carts are a common sight throughout the Kingdom. Typically, the carts either act as sidecars on motorbikes or are pulled by motos or, more recently, converted tuk-tuks.

Iced coffee – gah-fay dteuk-gork in Khmer – is a sweet and refreshing essential to any trip to Cambodia, with prices typically starting from KHR1,000 (20 pence). Depending on who you buy it from, the beverage comes in a flimsy plastic cup, complete with a holder, or in a tied plastic bag with a straw – watch out for them hanging from moto drivers’ handlebars.

Sweet and strong, the coffee is either served black, poured into a cup rammed to the top with ice, or with condensed milk for an even sweeter taste. The rapidly melting ice dilutes the strength of the coffee, making it more bearable for newbies.

Sourced from neighbouring Vietnam or the farms found mainly in Mondulkiri, the coffee beans tend to be sun-dried for longer than those used in the Western world. The slow roasting helps to preserve sugars and oils, hence the sweet (rather than bitter) taste of the beans.

A popular place to pick up a Cambodian coffee is the Russian Market, known locally as Psar Toul Tom Poung. At the centre of the bustling market you’ll find Mr Bunnareth, whose small stall bears the sign: Best Iced Coffee Phnom Penh. And if you don’t believe him, check out the photos plastered on the wall of smiling foreigners clutching their drinks alongside the long-standing coffeeman. 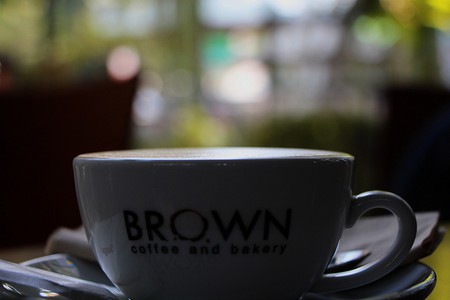 In recent years, Cambodia’s coffee culture has evolved, with the country’s craving for caffeine fuelling a surge in local and international coffee shop chains setting up in the capital. Phnom Penh’s popular Boeung Keng Kang 1 (BKK1) district is home to a swathe of stores on almost every corner, from local chain Brown Coffee and Bakery to Starbucks, Costa Coffee and Gloria Jean’s Coffees.