A Brief Guide to Fish Amok, the Classic Cambodian Dish 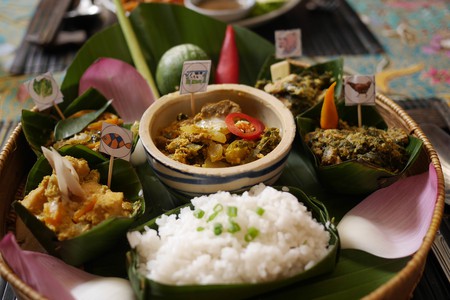 A tray full of all the ingredients that complete the traditional Cambodian dish, fish amok | © hwaleuk/Shutterstock

With a fertile coastline and one of the richest inland fishing grounds in the world, it is unsurprising that fish is a staple food in Cambodia. Fish and rice both feature heavily on the menus of local restaurants, as well as in kitchens across the country, and there are countless variations on this classic combo on offer. Perhaps one of the most famous examples is fish amok, which is so popular that it is often considered Cambodia’s national dish.

What is fish amok?

Referred to as the country’s national treasure when it comes to cuisine, fish amok is a type of curried fish that is steamed to infuse it with flavour and leave the fish so tender that it falls apart on the fork.

Unlike neighbouring Thailand and Vietnam, Cambodian cooking tends to use more herbs than spices, resulting in a much tamer kick. Chilies can, of course, be added for the brave-hearted who want to add fire to the flavour.

A tray full of all the ingredients that complete the traditional Cambodian dish, fish amok | © hwaleuk/Shutterstock

How to make fish amok

The classic Khmer dish is light, with creamy coconut notes. In traditional style, the curry paste, which includes ingredients such as chopped chillies and garlic, lemongrass, kaffir lime leaves and shallots, is ferociously pounded in a heavy stone mortar and pestle.

The fish – usually river fish – is lightly fried before being placed in the banana leaf bowl, drowned in the curry paste and steamed. Fish paste, or prahok, is another staple to the diet and can be seen drying in bamboo baskets on the sides of roads. It is also added to the mix, along with coconut milk, sugar and salt. The result is a thick, orange curry, topped with kaffir lime leaf ribbons and red bell pepper. In standard style, it is served with a healthy portion of rice, and is eaten with a fork and spoon.

There are various cooking courses available in Phnom Penh and Siem Reap, which include tips on how to cook up the perfect fish amok, along with a trip to a local market to buy all the ingredients. 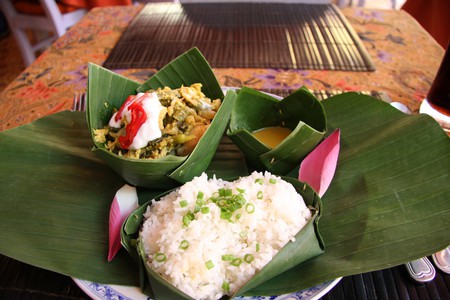