The 5 Best Hiking Trails in Cambodia 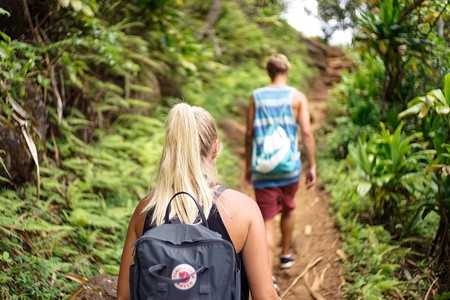 Cambodia is full of off-the-beaten-track countryside that is just waiting to be explored on foot. From its rugged jungle and gently sloped mountains to its seemingly endless paddies, there’s terrain for all kinds of long and short walks.

While infrastructure and access are improving at break-neck speed, Cambodia is still developing. It is advisable to trek with a group or hire a guide to ensure you stick to safe trails and don’t get lost, as there are still unexploded landmines that litter some parts of the countryside.

Cambodia’s at times stifling tropical climate can make walking through the midday heat seem an insane activity, so make sure you stock up on water, sun cream and light clothing to protect your skin from the relentless sun. 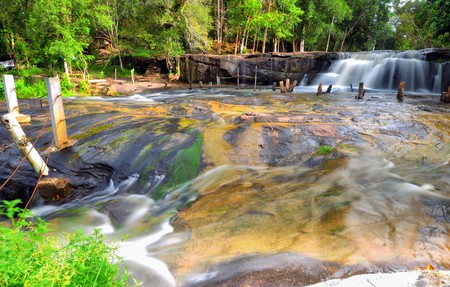 Nestled about 40km (25 miles) from Siem Reap is Kulen Mountain, a national park and religious site that is popular with Cambodians. The expanse of tropical jungle and holy mountain is home to a range of rare plants and flowers, waterfalls and hiking trails of all kinds. At the peak is a pagoda that is home to a huge reclining Buddha and stunning 360-degree views. Various operators offer guided walks and tours in the area.

A short drive away from the Cambodian capital sits diverse countryside and communities. Koh Dach, or Silk Island, is a quick ferry ride away, with a circular stroll around the rural island being about 22km (14 miles). The old capital of Udong is about an hour away in a tuk tuk and offers a gentle walk – minus the 509 steps – along the hilltop from one crumbling pagoda to the next.

For those looking to socialise while strolling, Cambodian Mai Channeang launched Phnom Penh Hike in 2015. Taking place on the first Sunday of each month, the reasonable price varies depending on the location, but includes transport, snacks, water and a guide. The walks take place on the outskirts of Phnom Penh, with Channeang carefully mapping out routes ahead of each outing. Previous popular walks include a hike around Tonle Bati, Koh Anloung Chen Island and a walk to Chreav Mountain waterfall. All of the walks are casual and a great place to meet like-minded people along the way. 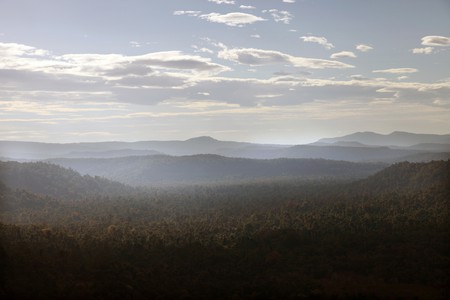 As Southeast Asia’s largest remaining rainforest, the Cardamom Mountains are full of rare and exotic flora and fauna. Remote is not an understatement when it comes to the Cardamoms and those visiting the area should prepare for basic living. Here, dense forest, grasslands and mountains stretch out as far as the eyes can see, with waterfalls, closed villages and exotic wildlife adding to its breathtaking beauty. Recent years have seen a series of eco- and community-based tourism projects open up in the area, with an increasing number of homestays and tours into the heart of the jungle being launched and led by locals.

Way before eco-tourism became the buzzword that it is today, wildlife rescue organisation Wildlife Alliance was busy working with remote communities in the heart of the Cardamoms to help villagers in Chi Phat make a sustainable income from tourism instead of illegal poaching and animal trafficking, which was rife in the area. In 2007, Chi Phat Village was launched, offering visitors a range of authentic homestays and a way to discover the real Cambodia. Former poachers have been trained as guides to take guests through the jungle on hikes or bike rides, as well as a range of other activities.

Once known as the Pearl of Asia, in the Golden Age of the 1950s and 60s, Phnom Penh was a vibrant, modern hub. Its wide boulevards were flanked by stylish minimalist buildings and colonial villas dominated in the leafy suburbs. Decades of civil war and the Khmer Rouge reign led to these structures being abandoned and left to dilapidate. While some have been renovated in recent years, many have tragically been torn down or left in a state of disrepair, often ignored by passers-by.

A great way to discover more about the capital’s turbulent past and its rapid recent development is to hit the side streets with Khmer Architecture Tours. Since launching in 2003, it has been promoting Cambodia’s urban heritage through its range of walking city tours. Led by Cambodian artists, architects and architecture students, the walks focus on buildings post-1953, when the country gained independence from the French. There are seven different tours, with private options available. 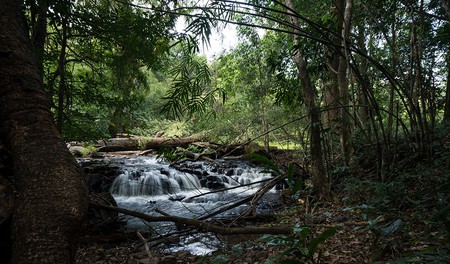 The remote eastern province of Mondulkiri offers an abundance of trekking opportunities. Boasting jungle, mountains and rolling hills, the region is also home to Cambodia’s hill tribes and its largest elephant population, which are at a low.

Mondulkiri Project offers one- and two-day Elephant Adventure and Jungle Trekking tours that take in rivers, waterfalls, swimming holes, wild animals, birds and, of course, elephants. As an elephant sanctuary, Mondulkiri Project has rescued four elephants from being overworked and abused, and given them a new lease of life by returning them to their natural habitat – a large expanse of the sprawling tropical jungle. Note that visitors are not allowed to ride the elephants. The tours are led by locals – mostly from the dominating Bunong tribe, who live in the jungle.