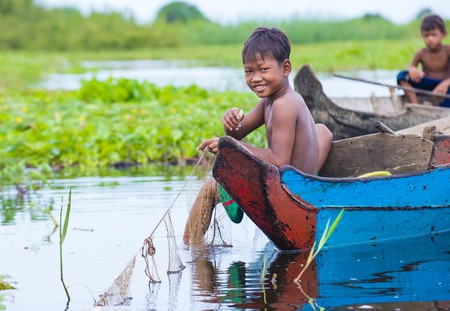 The Khmer spoken on Cambodia’s bustling streets is very different to that often taught in textbooks. Here is some lingo to help you speak like a local in Cambodia.

Do you knows your oums from your pous? A little slang goes an incredibly long way in Cambodia, as people rarely speak the complete speech touted in official guidebooks. Brush up on these 15 Khmer slang words and you won’t be a barang for much longer!

The formal greeting is chom reap sour in Khmer. However, you’ll be met with a puzzled look if you use this in an informal setting, for example, to say hello to a tuk-tuk driver or shop worker. Instead, use the informal susaday and you’ll be rewarded with a smile rather than befuddlement. Of course, there are exceptions to every rule, and if you’re meeting a person of importance then switch to the formal way of saying hello. 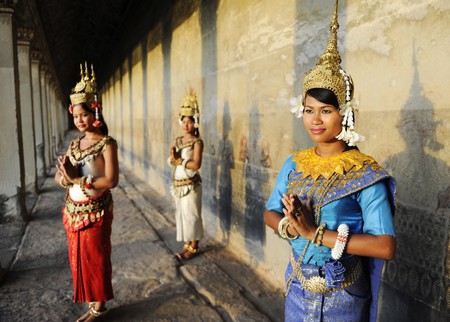 The sampeah is the common greeting in Cambodia | © Rawpixel.com / Shutterstock

Chom reap lear is the formal way to say goodbye, but as with hello, this is only used in official settings. On a day-to-day basis, li sin huey is the best way to bid a fond farewell in Cambodia.

When greeting peers or friends, Cambodians don’t usually bother with hello, so you can, in fact, scrap susaday. Instead, start your first exchange with soksaby, which is the Khmer way of asking: “How are you?”, and a word any visitor to Cambodia quickly becomes familiar with.

Use this in Cambodia and you’re guaranteed to get a giggle. Cambodians love to play with words and saysabok is in fact gibberish but is, however, a play on how you’d answer soksaby. The correct way to respond: “I’m fine” is to simply return with a repetition of, “soksaby” – or for a laugh, “saysabok”. 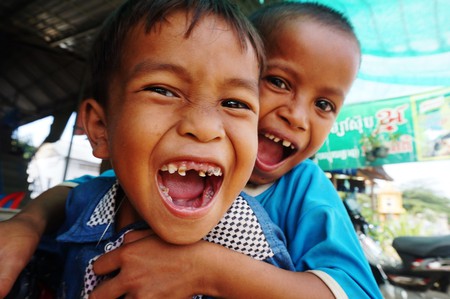 Speaking a bit of the lingo will guarantee smiles | © CarinaChen / Pixabay

Pretty much everyone is going to be your bong when you land in Cambodia, as the term is endlessly bandied about among locals. Translating directly to brother, bong is used to refer to basically anyone and everyone of around the same age. Despite bong srei being the direct translation for sister, females are still referred to as bong. This is actually great if you can’t remember a name.

Respect plays a major role in Cambodian society, and this is often reflected in the way people are addressed. Elders automatically command respect from those younger than them, and rather than being referred to as bong, they will be called aunty or uncle – oum or pou. This is accompanied by a sampah – the traditional greeting where the palms of the hands are brought together – with the hands rising higher than the chest-height to the chin. The higher the hands, the more respect shown.

You may well wonder how “yes” fits into the slang category when it has a clear use in everyday chatter. But if you want to fit in, then you better get used to saying “yes” a lot. For example, “Soksaby?”, “Jah/ bah, soksabay”, or it just generally being used as a conversation filler. Such as when listening to someone speak, the other person will often respond with nods and lots of “jah/ bah”. Note, in these circumstances “yes” is never said once. More, “jah, jah, jah, jah” in quick succession. 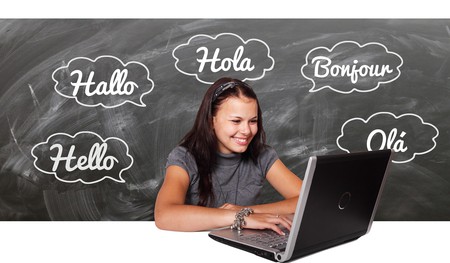 Learning a few local phrases will pay off | © geralt / Pixabay

This is another term that visitors quickly tune into. The phrase dates back to colonial days when it was used by locals to refer to the French. However, today it’s used for all foreigners. From the children passing by on the street, to the elderly women gossiping on their doorsteps, you’ll know you’re being talked about when you hear barang dropped into the conversation as you pass.

Cambodians love everything about food. Eating it, cooking it, talking about it. And if you want to win some brownie points, then complimenting the chef on a meal is a guaranteed winner. Chhnang means tasty, and nas means very and can actually be placed after any adjective to add emphasis. For example, to say very hot, “kdao nas”, very pretty, “sa-art nas”.

Directly translating as “bump one”, if you plan on sinking a few beers at one of the many beer gardens that dot Cambodia, then choul mouy is essential vocabulary. Cambodians love to cheers. In fact, it’s custom to do it before each sip, followed by everyone at the table clinking glasses and shouting choul mouy. This can make finishing a beer a lengthy process. 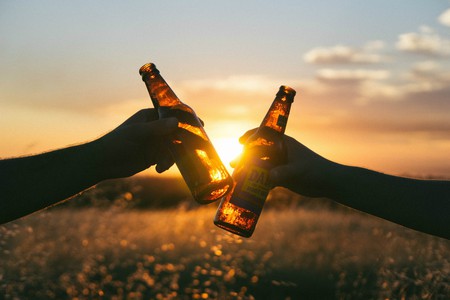 Beer is one of Spain's most popular drinks | © Free-Photos / Pixabay

Picking up a few Khmer phrases and numbers is a sure way to drive down prices when bartering at the markets or for tuk-tuk rides. Being able to speak the local lingo will bag you an even better bargain along the way. The correct way to ask, how much? is, “Bou man?” But that’s rarely used among locals, who simply shorten it to, “Man?”

Not classified as a swear word, yap moung puts in a frequent show in Cambodian conversation and is used to refer to someone who has behaved in a stupid or idiotic way. Yap translates as crazy/stupid, with yap moung being a playful term.

Cambodians are romantic at heart and the generic term of “boyfriend” or “girlfriend” doesn’t cut it on a local level. Instead, locals – especially young lovers – often affectionately refer to their other half as songsaa, which directly translates as “sweetheart” – cute, nas. 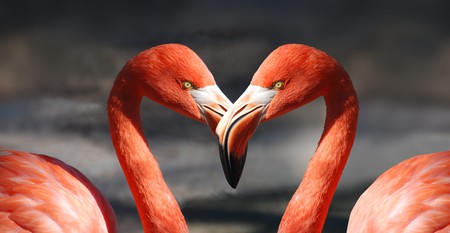 Another phrase that will score you points on a local level is learning how to say beautiful, which is sa’at in Khmer. This means you can compliment the cute kids crying out hello, the stylish outfit or beautiful hand-crafted goods and lap up the wide smiles and laughs it evokes.

It can be surprising to non-natives how often “already” is used in a conversation because Cambodians use it a lot. It is placed at the end of a sentence to imply you’ve already done something. For example: “I’ve already seen that film”, or “She already knows how to do that”. However, with Khmer verbs not having conjugation to show tense, howey is also used to talk about the past. For example: “She has been to the market”.