11 Cambodian Musicians You Need to Know 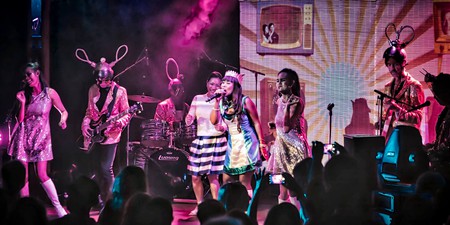 Music pumps through the veins of Cambodians, who love to sing regardless of where they may be. And when you listen to some of the great musicians who have taken to the air waves, it’s easy to see why. Here are 11 Khmer greats of the past, present and future.

Considered Cambodia’s first rock band, Baksey Cham Krong helped launch the rock‘n’roll revolution that swept across Cambodia during the Golden Age of the 1960s and into the early 70s. Taking influence from the genre that was sweeping across the West, such as the Rolling Stones and The Beatles, they blended Khmer sounds with the surf and garage rock of the West. Baksey Cham Krong and some of the other rock’n’roll masters mentioned below feature in the award-winning documentary, Don’t Think I’ve Forgotten.

Nicknamed the King of Khmer Music, Sinn Sisamouth’s crooning vocals were often likened to the voice of Nat King Cole. His career started with singing on radio during medical studies in his early 20s. By the late 1950s, he was one of Cambodia’s most popular musicians, again embracing the rock era that was gaining momentum across the West. Paving the way for a modern wave of music, Sinn traded in the traditional wind instruments that accompanied Cambodian music, experimenting instead with blending Western sounds with Khmer music. The result is Cambodian rock‘n’roll, with its distinct grooves. As with many of his peers, Sinn was killed under the Khmer Rouge, who targeted artists as part of their genocidal regime.

Another national treasure is Ros Sereysothea, with Sinn credited with unearthing the “Queen of Cambodian rock‘n’roll”. Born into a poor family in Battambang, Ros’s talents were discovered early on, with her also securing singing success on national radio. Ros and Sinn carried out a string of smash-hit duets in the late 1960s and early 70s. She was pioneering in her style, again choosing to incorporate elements of Western rock‘n’roll and psychedelic flavour into her sounds. Ros was killed by the Khmer Rouge but her songs live on today, thanks to a recent revival in the genre.

Dubbed the second lady of Cambodian rock‘n’roll, Pan Ron rose to fame after she started recording with legend Sinn in 1966. Despite Ros bursting onto the scene a year later, Pan’s career didn’t falter. She was known for her versatility, with a repertoire spanning rock, jazz, folk, mambo and twist songs. As well as a string of solo hits, Pan recorded many hits with Sinn and Ros. She also died under the Khmer Rouge.

Modern-day pop princess Nikki Nikki has had her finger on the popular music pulse for the last few years, after securing a firm fanbase on YouTube. Combining powerful ballads with upbeat dance tracks, she has a string of hits under her belt and remains a firm favourite when she performs live. Her track ‘Home for Dinner’ has become iconic among Khmer youth.

Helping to revive Cambodia’s almost-forgotten rock‘n’roll scene was the main mission of Srey Channthy when she founded Cambodian Space Project with Julien Poulson in the early 2000s. As the fun and funky band’s lead singer, her powerful voice has become famous across the country and beyond. She recently launched a solo project, Channthy Cha Cha, taking in classic Cambodian rock‘n’roll and retro psychedelia, as well as her own material.

Chhom Nimol is the lead singer of another band that has helped breathe new life into Cambodian rock‘n’roll globally. She was born in Cambodia and lived in a Thai refugee camp on the border until being sent to America in 2001. It was there that her vocal skills were picked up by Los Angeles-based band Dengue Fever. She joined as their singer and has been covering a range of classics from the time, including Ros’ tunes, to international audiences ever since.

Based in – yes, you guessed it – the riverside town of Kampot, the Kampot Playboys is an outfit made up of six energetic musicians, playing a blend of traditional and modern instruments, such as the guitar, tro sau and accordion. They play a fusion of traditional Cambodian music, rock, pop, folk and ska.

Jessica Srin – or MC Lisha – is Cambodia’s first female hip-hop artist, rapping and recording since the early 2000s. Having studied traditional Cambodian dance at university, she went on to become a pop singer until the age of 20 when she got her calling and fell into hip-hop as a way to spread her messages to the world.

Van Chesda, 22, hails from Kandal province and is a rising singer-songwriter, who also specialises in rap, putting releases ‘Lok Pa’ and ‘Vihean One’ as his top hits. Chesda, who was a finalist in Cambodia’s Got Talent in 2015, is inspired by Cambodian traditional arts and international modern culture and aims to bring something fresh to the country’s music scene.