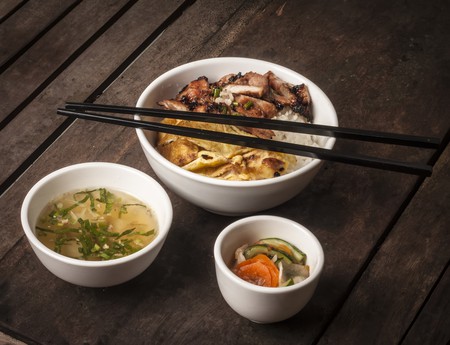 Often wrongly overshadowed by the cuisine of neighbouring Thailand and Vietnam, Cambodia’s cuisine takes in a range of mouth-watering dishes. Using more herbs and less spices than other Southeast Asian countries, the kick is added from the various side dishes that often include chopped chillies and garlic. With no shortage of places to eat local across Cambodia, here are a few dishes to whet the appetite.

Often referred to as Cambodia’s signature dish, this creamy curry can be found in abundance. Made using fillets of freshwater fish, it is diced and covered in coconut milk, eggs, fish sauce and palm sugar. Kroeung – a paste made from pounded spices and other ingredients, such as turmeric, kaffir lime, lemongrass and shallots – is common in khmer cooking, and is also added. The traditional way to cook the dish is steamed in a banana leaf shaped into a bowl, within which it is served. 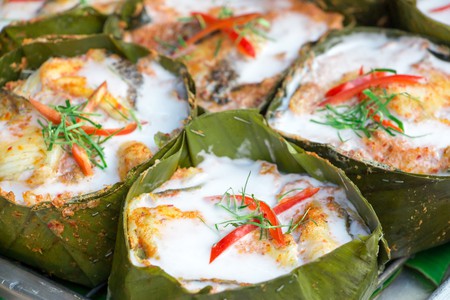 Another popular street food dish to start the day with, kuy teav – or noodle soup – is also available throughout the day. Made from pork or beef bones and rice vermicelli, the flavoursome broth is topped with fried shallots and garlic, bean sprouts, green onions and aromatic herbs. Pork or fish balls are added, with some varieties featuring beef. Side portions often consist of chilli paste, half a lime and hoisin sauce.

Another dish common on restaurant menus is beef loc lac. While the addition of French fries is a relatively recent modernisation, loc lac is a salad. Here, stir-fried strips of tender beef sit atop a bed of crisp lettuce leaves, sliced tomatoes and cucumbers and rings of raw onions. Often, it’s served with a fried egg placed on top. However, what really makes this dish special is the dipping sauce of lime juice and pepper – make it Kampot pepper to make the flavours truly pop. 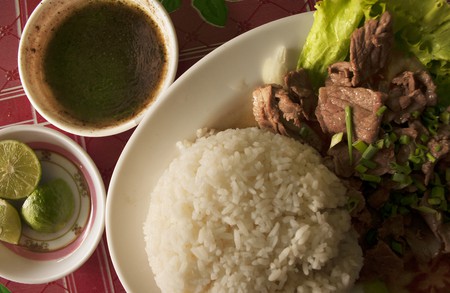 Undeniably an acquired taste when served as a main course alongside rice and a side salad, prahok is a staple to any Cambodian dish. The crushed, salted and fermented fish paste is used unsparingly as a seasoning adding a strong salty flavour. Its pungent odour has earned it the nickname of Cambodian cheese. Whether you love or hate the sound of it, there’s no avoiding it in Cambodia.

While recipes can wildly vary – along with the spice rankings – a Khmer curry is generally mild and mellow, with an almost sweet aftertaste. Containing chicken; coconut cream and milk; fish sauce; herbs and diced sweet potatoes; garlic; shallots; turmeric and ginger, the thick, flavoursome and aromatic broth is served with either rice or a baguette.

Wake up early enough and you’ll see the pavements full of plastic tables and chairs full of people hunched over bowls. Most of the time, they’ll be eating pork and rice, or bai sach chrouk – Cambodia’s national breakfast dish. Only available in the morning, the dish’s star player is thinly sliced pork marinated in garlic and oil before being slowly barbecued on a warm grill. It is served over rice with sliced cucumbers and pickled vegetables.

This dish gets its name from the short fat noodles that are its main feature. They are stir-fried with beef, broccoli, beansprouts to add crunch, herbs, and lashings of fish sauce and soy sauce. A fried egg is placed on top, with an accompaniment of sweet chilli sauce. This is sold in street carts throughout the country.

Readily available across the Kingdom, the popular dish of nom banh chok is made of thin rice noodles, shredded banana leaves, beansprouts, cucumber, mint and basil, topped with green fish curry. It is often sold by woman precariously balancing a pole on her shoulders containing the ingredients on either side.

Full of flavour and colour, this is another dish that packs a punch. Crunchy, zesty and super refreshing, it features fresh chilli, fish sauce, sliced green mango, sliced tomatoes and shallots, pickled cucumber, onion, peppers and fresh basil or mint. Another good lunch option when the humidity strikes. 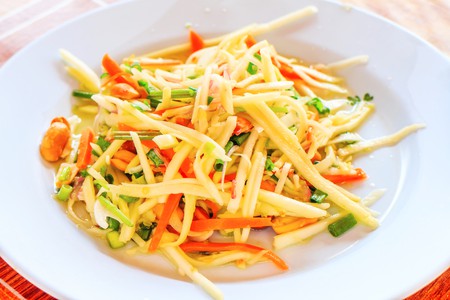