10 Interesting Facts You May Not Know About Cambodia 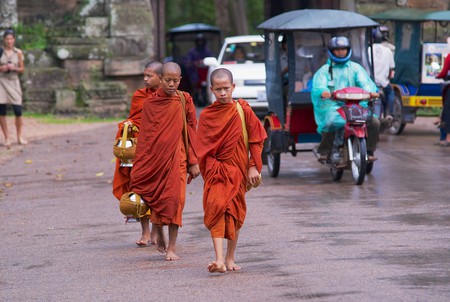 The Southeast Asian country of Cambodia can come coupled with a culture shock for some. However, the country is awash with jaw-dropping sights, random rituals, and strange facts that get visitors hooked.

The Cambodian currency is the riel (about 4,000 riel to U.S.D.1), although the U.S. dollar is more widely used. Transactions that are less than a dollar tend to be done in riel. Remember, Cambodia is a cash-centric country and credit and debit cards will not be accepted in many outlets. Keeping small change on you is also essential as many small stores will be unable to break anything above a $20 bill. Cambodians will also refuse dollar notes that are torn or crumpled, so keep them clean.

Cambodia has had a string of names. In fact, it’s been changing its name with every new government, and has taken he names of the Khmer Republic, Democratic Kampuchea, and the People’s Republic of Kampuchea. Today, under Hun Sen’s ruling of Cambodia’s People’s Party, it is called the Kingdom of Cambodia.

Despite Cambodia’s utterly insane roads, where no rules seem to apply, road rage is few and far between. And in a country where anger gets you nowhere, it will pay to keep your calm if you happen to be involved in a bump. Overtaking on blind bends, driving the wrong way down a road, ignoring traffic lights, or hurtling into a busy junction—Cambodia’s roads are full of scary moments.

Get Your Sweat on

If you’re unfortunate enough to have booked your holiday in April, then prepare to get sweaty, because this is Cambodia’s hottest month. During this time, temperatures hit more than 104°F (40°C), with the humidity peaking beyond belief, making it feel like you’re swimming through the muggy air. Escape to the coast if you can.

Ask many Cambodians, especially those living in the provinces, how old they are and you may get different answers: their Khmer age and their international age. Traditionally, Cambodians are born at the age of one rather than zero like in other parts of the world. It is also a tradition that on Khmer New Year, which falls in April, all Cambodians age another year.

Cambodia is home to several endangered species, such as the Irrawaddy dolphin, that can be found in a stretch of the Mekong River in Kratie, and the nearby Cantor’s Giant Softshell Turtle. Siem Reap and Preah Vihear are also home to the rare Giant Ibis bird, and the Tonle Sap is home to a range of protected marine life.

The Tonle Sap in Siem Reap is the largest freshwater lake in Southeast Asia. The Tonle Sap River leads to Phnom Penh, where it meets with the Mekong. In a unique twist, twice a year, the flow of the Tonle Sap changes direction. In November, with the start of the dry season, the water starts to drain into the Mekong and the lake shrinks, while around June water levels start to rise with the onset of monsoon season. 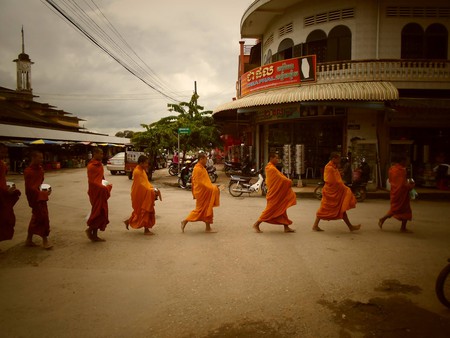 Monks on their morning collection of offerings in Battambang, Cambodia | © Marissa Carruthers

About 95% of Cambodians practice Therevada Buddhism, and monks with bald heads and saffron-colored robes can be seen throughout the country. Every morning, lines of monks will roam the streets, stopping off at shops and houses to receive offerings of food, money, and other items in exchange for a blessing. Note that women are not allowed to touch monks.

While huge efforts have been carried out to clear Cambodia of the unexploded ordinance and landmines that litter the county in the last few decades, it is estimated that as many as four to six million remain. As remnants of the civil war and spillage from the neighboring Vietnamese War and the Khmer Rouge, they still pose a grave danger to rural Cambodians, who often discover them while fishing or farming. The latest figures show that between January and June of 2016, 20 people were killed and a further 29 were injured.

Respect plays a huge role in Cambodian society, as elders are held in high regard. Family is also a first priority, with married couples moving into the wife’s parent’s home. With no social support system, children are expected to support their parents as they grow older.