The 10 Best Books About the Khmer Rouge in Cambodia 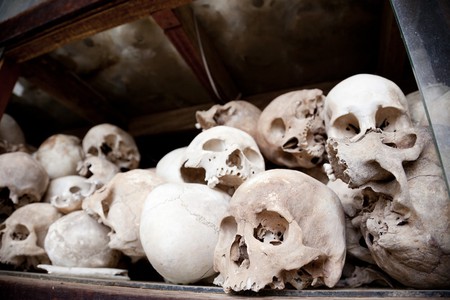 Between 1975 and 1979, the Pol Pot-led Khmer Rouge regime ruled Cambodia with deadly force. Under its reign, an estimated two million people died. Here are 10 books about the Khmer Rouge, many of which were written by survivors.

First They Killed My Father by Luong Ung

Possibly the most famous of the books written about life under the Khmer Rouge – thanks to the recent Netflix release of the Angelina Jolie directed film adaptation – First They Killed My Father tells the story of Loung Ung. Told through the eyes of Loung, who was five years old when the Khmer Rouge stormed the capital Phnom Penh in April 1975, the book tells her story of surviving the brutal work camps, of loss, determination, love and training as a child soldier. The beautifully written page-turner is often brutal, depicting the horror of life under the regime.

The lesser-known but just as poignant sequel to First They Killed My Father is Lucky Child. Taking up where its predecessor left off, Loung is aged 10 when she is chosen to go with her brother to America, leaving one sister and two brothers behind. Here, the story follows the parallel lives of herself and her sister, Chou. It also looks at her struggle adapting to a new life in a new country with alien cultures, while battling the scars of war and struggling with the despair of loss. It once again pays testament to the resilience of many survivors.

Survival in the Killing Fields by Haing Ngor

Haing Ngor is best known for his Oscar-winning performance as Dith Pran in the 1984 Hollywood hit, The Killing Fields. Much like his character in the film, Haing is a survivor of the atrocities committed across Cambodia between 1975 and 1979. Survival in the Killing Fields is an excellently written and moving account of survival in times of unimaginable horror. Haing was sent to America as a refugee after the war. There, after writing the book, he was murdered on his doorstep. Later editions of the book feature an epilogue written by Haing’s co-author, Roger Warner, that pay tribute to him.

Alive in the Killing Fields by Nawuth Keat

Another captivating memoir that recounts the brutal nature of life in Cambodia under Pol Pot is Alive in the Killing Fields. After his hometown is overrun, Nawuth and his remaining relatives are captured and enslaved by Khmer Rouge fighters. He documents their endurance through beatings, starvation, over-work and inhumane living conditions, and their strength and determination to survive.

When Broken Glass Floats by Chanrithy Him

The Khmer proverb “when broken glass floats” refers to the moment when good triumphs over evil. As a child survivor of the Khmer Rouge, in this book Chanrithy Him recounts her experiences under the regime, when her family of 12 was decimated. Both her parents were slaughtered and five of her siblings died of starvation or illness. Amidst all this horror she still manages to find kindness and courage, and learns that humanity can still shine. Him lived in a refugee camp in Thailand before relocating to America as a refugee.

To Destroy You is No Loss by Joan D. Criddle

“To destroy is no loss” was a phrase commonly used by the Khmer Rouge, and a philosophy that the soldiers lived by. In this book, author Joan D. Criddle tells the story of Cambodian-American Silicon Valley computer programmer, Teeda Butt Mam, daughter of a Lon Nol minor government official when Phnom Penh fell to the Khmer Rouge. As a 15 year old she was sent to a labour camp and endured four years of hell. The book is another example of the courage and strength shown by those who lived during these times.

Never Fall Down by Patricia McCormick

Nominated for a National Book Award, Never Fall Down tells the story of Arn Chorn-Pond, the founder of Cambodian Living Arts, an organisation that works to revive and reinvent the traditional arts. Told from his perspective as a young boy, Arn recounts being separated from his family, assigned to work in the rice fields and witnessing death. When soldiers ask if any children can play an instrument and Arn says yes, he finds himself in the centre of the killing fields, before being handed a gun and forced to fight. A truly compelling tale.

When the War Was Over by Elizabeth Becker

Award-winning journalist Elizabeth Becker covered Cambodia from 1973 for The Washington Post, through to the rise of the Khmer Rouge in 1975 and beyond. In When the War Was Over, she gives a historical account of the country from the French colonial era through to the death of Pol Pot in 1998. Becker carried out extensive research for the book, interviewing many survivors and Cambodian leaders. An informative and enlightening read.

Voices from S-21 by David Chandler

World-renowned historian David Chandler highlights the atrocities committed at political prison, S-21, in Phnom Penh in this book. The former school was transformed into an interrogation centre, where only a handful of the 14,000 Cambodians sent there survived. Prisoners were tortured there before being sent to nearby Choeung Ek, which is now preserved as The Killing Fields. S-21 – or Tuol Sleng – is today a genocide museum paying tribute to those who died. As well as looking at the history, Chandler examines the “culture of obedience”, drawing parallels between Cambodia’s dark history and other events, such as the Nazi genocide, Indonesian massacres and the mass killings in Bosnia and Rwanda.

This moving memoir follows Pin Yathay, who was an engineer at the Ministry of Public Works in Phnom Penh when the Khmer Rouge stormed the capital. As a critic of the corrupt Lon Nol regime that the Khmer Rouge were fighting to overthrow, Pin – like many of his fellow countrymen and women – believed the Pol Pot regime would free the country. Stay Alive, My Son tells of the 27 gruelling months Pin spent under the regime, the slaying of his family – which diminished from 17 to three – and the unthinkable decision they had to make of whether to leave their desperately ill son behind to escape to Thailand.