Lisa Napoli’s Radio Shangri-La charts her journey from cosmopolitan Los Angeles to the secluded and peaceful Himalayan kingdom of Bhutan, where she discovered a new way of life, devoid of the Western city frenzy. She also charts the changes taking place in Bhutan, as it slowly opens up to the wider world. Here, we share two extracts from Radio Shangri-La. 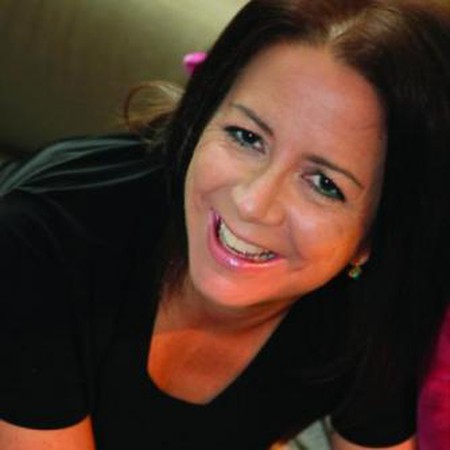 The approach to the most sacred monastery in the Kingdom of Bhutan is steep and winding and, especially as you near the top, treacherous. You are sure with one false step you’ll plummet off the edge. Had I been here during certain times over the last few years, I might have hoped I would. It is a cold winter’s Saturday, dark and overcast. Misty gray clouds, pregnant with snow, hug the mountains.
My companions are several of the twenty-somethings who staff the new radio station in Bhutan’s capital city, where I’ve come to volunteer. Kuzoo FM 90: The voice of the youth. Pema is wearing jeans and a sweatshirt and ﬂat white dress shoes, the kind you might put on with a demure frock for a tea party. Ngawang’s wearing the same stuff on top, but she’s got sneakers on her feet. Each woman carries a satchel stuffed with her kira, the ofﬁcial national dress, requisite attire for Bhutanese who reach the summit. Kesang is already wearing his gho, the male equivalent. Over it, he’s carrying a back pack ﬁlled with ten pounds of oil to fuel dozens of butter lamps, offerings to be left for the gods. Me, I’m twenty years older, and practicality reigns: I’ve got on my thick-soled boots, an ugly long black down coat with a hood, and six layers of clothing underneath. 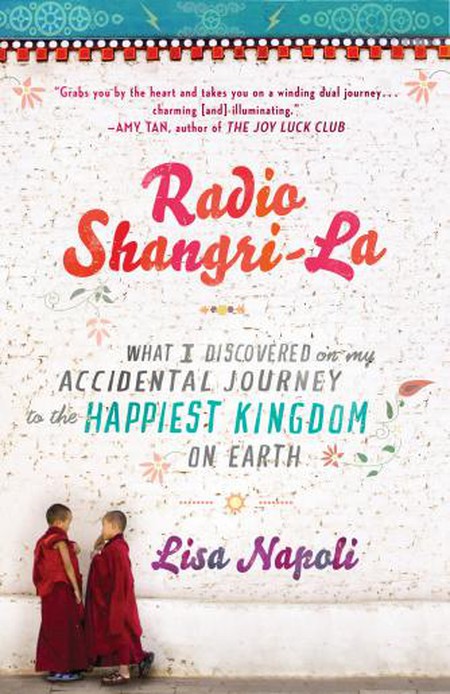 So much for the strength I’ve gained from my daily swimming regime; I am hufﬁng and pufﬁng against the altitude and the intensity of the climb. My new friends modulate their sprints to let me keep up. Bhutanese are hearty in many matters—they are used to living off the land, the hard lives of farmers—but they are particularly strong when it involves making the trek to this place called Takshang, built on a sheer cliff that soars ten thousand feet into the sky. The depth of their devotion becomes abundantly clear when, out of nowhere, a radiant twelve-year-old boy scurries down past us, stark naked, completely unaffected by the temperature and the incline. He’s trailed by a solemn entourage of grown men. Not one of them misses a step. Later, we learn this beatiﬁc adolescent is a reincarnated lama on pilgrimage from the remote eastern reaches of this tiny country.
A pilgrimage to Takshang is the highlight of a trip to Bhutan, but it is commonplace for the Bhutanese. They are carried here from babyhood. Slight, frail seniors navigate the twists and turns and inclines deftly from memory, in a fraction of the time it takes foreigners half their age. Tales are told of people with physical disabilities who labor for twelve hours so they might reach the top, where a cluster of temples awaits. The most sacred of the altar rooms there is open to the general public only once a year. 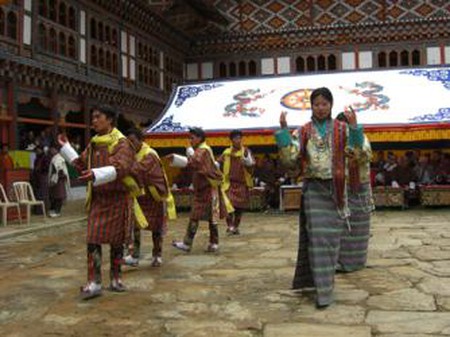 It is believed that meditating for just one minute at Takshang will bring you exponentially greater blessings than meditating for months at any other sacred site. If you travel here on a day the calendars deem to be auspicious, the merit you accumulate will be even more abundant. Ngawang tells us that the ﬁrst time she remembers visiting was two decades ago, when she was four years old; her mother had died and the monks sent her here to pray.
What Takshang promises all who visit is cleansing and renewal. Into this valley in the eighth century a sage named Guru Rinpoche rode in on the back of a tigress. Then he re-treated to a cave for three months and, with the most powerful weapon there is—his mind—swashbuckled away evil spirits. In so doing, he persuaded the Bhutanese to adopt Buddhism as their guiding light. Hundreds of years later, to mark the feat, a colony of structures was built in this precarious location—testament to how the people of Bhutan have long revered him, this being they consider the Second Buddha.
As we climb higher and higher, and as the gold-topped Takshang comes into view, I can feel Guru Rinpoche’s strength bolstering my own, diminishing demons, softening my heart.

Chapter One – The Thunderbolt 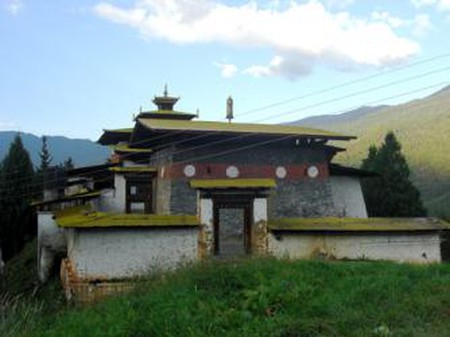 Bhutan was considered the last Buddhist kingdom, as others around it like Tibet and Sikkim had been swallowed up in political battles waged by giant neighbors China and India. Little, independent Bhutan had been known as the Land of the Thunder Dragon since the twelfth century, when an important religious man heard a clap of thunder—believed to be the voice of a dragon—as he consecrated a new monastery. The nation had long deﬂected colonization and outside inﬂuence. Christian missionaries had come calling in 1627, but the only lasting legacy of these Jesuit priests from Portugal is a detailed written description of their travels there and the hospitality they enjoyed from the locals, who politely resisted conversion.
Today, the majority of the people subsist by farming. There isn’t a single trafﬁc light anywhere in the country, not even in the capital city, the only capital in the world without them; in-stead, a uniformed police ofﬁcer directs cars at a handful of particularly tricky intersections. As part of a campaign to preserve the culture, citizens are obliged to wear the traditional dress—intricate, colorful hand-woven pieces of cloth called kira and gho. 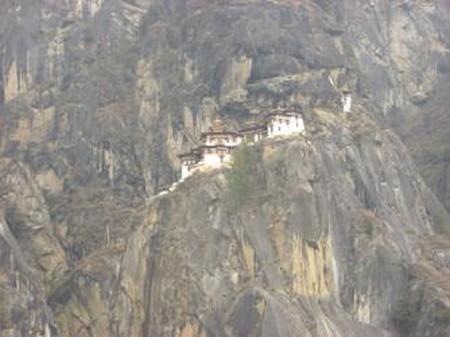 The reigning king had married four sisters simultaneously—the queens, they were called. Among them they had had ten children—eight of them born before an ofﬁcial marriage ceremony had taken place in 1988. There was a surreal portrait of the women standing shoulder to shoulder, wrapped meticulously in brightly colored kira, perfect as dolls, each one gorgeous and just slightly different from the next. What was that family dynamic like? Multiple simultaneous marriages weren’t reserved for royalty, it seemed; this practice was allowed for all the citizens of Bhutan. Men and women, both. An Internet search didn’t reveal how common this was.
King Jigme Singye Wangchuck and his father before him had been progressive in a variety of ways: They’d been responsible for nudging, then catapulting Bhutan into the modern world after years of seclusion. Hard currency, roads, schools other than that of the monastic variety—all had been introduced in only the past forty years. Since Bhutanese would now need to study abroad to become doctors and lawyers and scientists necessary for the health and measured growth of the nation, the native tongue, Dzongkha, was replaced by English as the language of instruction. The ability to speak English was perceived as a passport to almost anywhere, a vital connection to the outside world as Bhutan moved into an era of progress and relative openness it had previously worked to avoid. 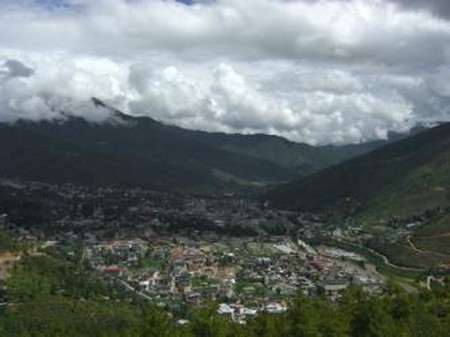 Despite its isolationism, Bhutan had been at the vanguard in other ways. Long before the rest of the world started ﬂaunting environmental concerns as a trendy marketing strategy, Bhutan’s king had been winning awards for his genuine commitment to conservation. Clear-cutting was not allowed, and if a single tree was chopped, three had to be planted in exchange. By royal covenant, he had committed that 60 percent of Bhutan’s forests would always be preserved. Unlike many Asian countries, Bhutan had not been transformed into a giant pollution-generating smokestack, nor was it overpopulated, with only 650,000 citizens. It was poor, but it prided itself on the fact that no beggars were on its streets. Babies weren’t left on the doorsteps of orphanages; such institutions didn’t exist. Everyone had roofs over their heads and something to eat. The people took care of one other. A royal form of welfare called kidu allowed citizens in the most dire circumstances to petition the king for help.
Perhaps the most unusual and intriguing aspect of this Land of the Thunder Dragon was its attitude toward development and consumerism—the policy that catapulted Bhutan to the formidable (if unqualiﬁable) distinction as a place populated with supremely happy people. Instead of measuring its economic progress by calculating the gross national product—a complex matrix detailing the monetary value of what a country churns out—His Majesty created a different scale. He pro-claimed this philosophy, ironically, poetically, “Gross National Happiness.” Economic progress at any cost, went the thinking, was not progress at all. Any force that threatened Bhutan’s traditions or environment was cause for concern—and not worth inviting into the country. The well-being of the people was to be considered before the sheer generation of goods and cash, before rampant growth just for the sake of an upward slope on a graph. Quality of life was to take precedence over ﬁnancial and material success. Compassion toward and cooperation with your fellow citizens was fundamental, essential, rather than mowing down the other guy with abandon so you could succeed. 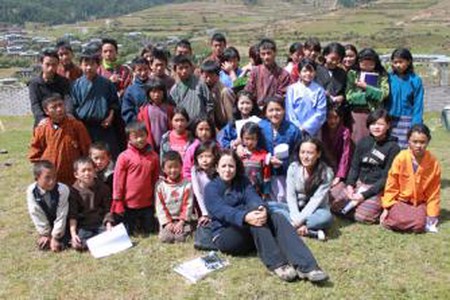 Social scientists and economists around the globe curiously studied GNH and this place that because of it had been dubbed “the happiest place on earth.” What would the New York City couples buying $2.7 million apartments with nannies to assist their nannies think about these ideals? How about the audience and staff of the radio show where I worked, where the theme was money and business? Being, not having. Happiness above wealth. It sounded great to me; Bhutan certainly appeared to have its priorities straight. At least, it seemed to have the same priorities I was craving more of in my world.
Could it be real? Or was it brilliant sloganeering, a marketing mirage? Maybe I’d ﬁgure out a way to get to Bhutan one day, to ﬁnd out for myself.

Find out more about Radio Shangri-La at www.lisanapoli.com.