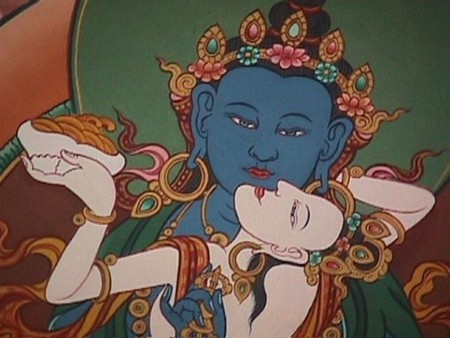 Phurba Namgay is a classically trained Bhutanese painter of Buddhist art. He was born in Trongsa, in Central Bhutan, in 1963. When he was a child, as part of his preparation to become a monk, he studied Tibetan writing (Choki), ‘dharma’ and ‘ritual’ under the watchful eye of his uncle, who happened to be one of Bhutan’s Lamas. He exhibited an unusual talent for drawing, so at the age of 13 he entered formal studies of Bhutanese painting at the Institute for Zorig Chusum, the government’s school of traditional arts in Thimphu, Bhutan’s capital. Zorig Chusum means ‘13 Arts.’

The art form he paints is called ‘thangka,’ literally paintings made to be rolled and unrolled like scrolls, and these artworks range in size from a few inches to room-size. Namgay also creates wall paintings in a method similar to painting frescos, and he also paints on large pieces of canvas that are pieced together and attached to temple walls like wallpaper. 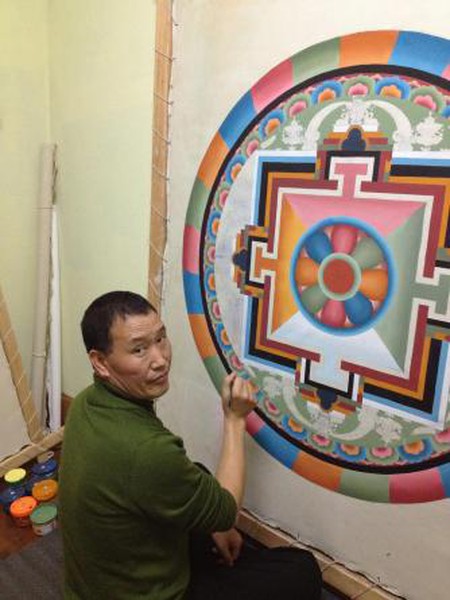 As part of his training he learned to draw, paint, make his own paints from minerals such as 24 karat gold and natural pigments, and make his own brushes. The summer hair from a cow’s ear makes the finest brushes, according to Namgay. Sometimes he clips hair from his cat. ‘My brushes are very small, so I don’t need a lot of hair. My cat doesn’t mind,’ he says.

After eight years of study at the Zorig Chusum in Thimphu, Namgay gained an apprenticeship, which eventually led him to become a master painter. The next eight years were spent working on commissions of murals temples and monasteries in the Kingdom of Bhutan. Examples of his work can be seen throughout Bhutan, most notably the brilliant temples of Punakha Dzong and Paro Tsang Chuiko.

Namgay returned to the Institute for Zorig Chusum in 1990 as an instructor of thangka painting and rimo, or drawing, and worked there until 2001. Now he works in his studio in Thimphu with three or four apprentices, painting thangka commissions and temple walls, and his own fusion art that is constantly evolving.

Since 2008, Namgay has spent part of his time in the USA, where he had a fellowship at the Vermont Studio Center, and where he has studied elements of Western Art. He says has a special affinity for photorealist and hyperrealist art. 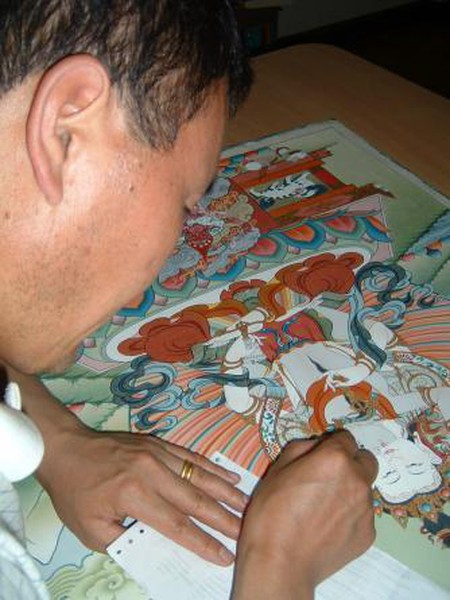 Namgay’s work has been exhibited in New York, Amsterdam, Bolder, Nashville, London, New Delhi and Copenhagen, and is held in the Hood Museum, Dartmouth College in Hanover, New Hampshire, Vanderbilt University’s Permanent Collection of Asian Art, the Tennessee State Museum, and the Rubin Museum of Himalayan Art, as well as in private collections in Europe, Asia, Australia and the USA.

Namgay finds his extended visits to the USA inspirational and although he still paints traditional Buddhist thangkas, he likes the way contemporary Western art affords an element of creative license, and so in his new paintings he likes to describe his journey from the Himalayas to the West.

The new pieces combine Buddhist iconography and mythological creatures, idealized dragons, tigers, snow lions, phalluses, lotuses and demons with the pedestrian – both literal and figurative – road signs used to negotiate life in the West. The result is enchanted, mysterious and whimsical images that may be read allegorically or literally. In one painting a fierce tiger paces a zebra crossing. Namgay says in Bhutan, painters paint images or symbols that the people read as signs of what to do and how to live. They are painted everywhere, on the houses and buildings, on the rocks and on flags. They are Buddhist prayers or deities, or mythological animals and other symbols. The tiger is for protection and power. A lotus flower means beauty, knowledge and enlightenment. Horses carry prayers to heaven. There are so many symbols, all daily things, which remind people to pay attention, and to give them feelings of power, compassion and knowledge. 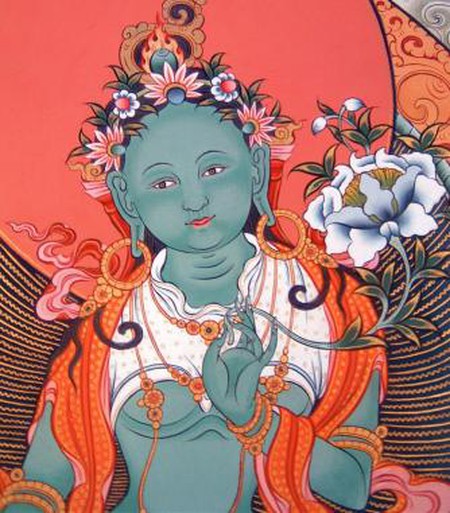 ‘In the United States I see signs that show the same things. Anywhere we are we need protection, direction and power. Americans especially need these now,’ says Namgay.

Several years ago an American friend gave Namgay a book about NASA and the space program. He became intrigued with American rockets. Namgay sees American rockets as allegorical, not unlike the Bhutanese dragons he grew up with. He says that when he was a child in the village and learned that Americans had landed on the moon, many adults in his village didn’t believe it. ‘It’s like Americans who don’t believe in dragons,’ he says, laughing. So in between painting traditional thangkas, he likes to stretch his creative muscles and paint pieces for his ‘Rocket Series.’ He’s especially fond of Apollo 13, because, he says, ‘Thirteen is my lucky number. Also in Greek Mythology, Apollo is a God of the sun and light.’ In the ‘Rocket Series,’ Dragons interact with Apollo 13, which flies in a landscape reminiscent of the traditional thangkas he paints. In one, a giant lotus launches multiple rockets, and there is even a Starbucks coffee cup with rockets flying out of it. 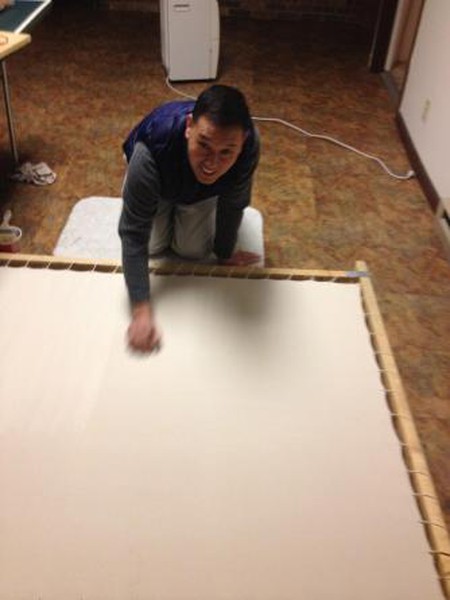 Roads are a powerful symbol in Namgay’s art, as are the vehicles that travel on them. Dragons, rockets, garudas, tigers and arrows float on roads of ethereal clouds, which seem to have a life of their own. They are evocative, and provide a utopian idea of perfect clouds, floating in a realm where East does, in fact, meet West.

Namgay also explores the ancient and modern worlds through his hyperrealist series. In these he paints Bhutanese antiquities: baskets, coma (richly designed gold and silver broach-like pins that hold Bhutanese women’s dress together), and other pieces in the hyperrealist style.

Namgay has been inspired to take his traditional thangka painting and change it to describe what he sees and feels right now, according to Herb Williams, curator at Rymer Gallery in Nashville, Tennessee. ‘It is one of the best indicators that an artist is living in the now,’ says Williams. ‘It’s very honest. Namgay’s art is based on traditions that are centuries older than ours. It’s revolutionary for him to step out of those.’