Surviving a Tiger Attack in the Sundarbans, West Bengal 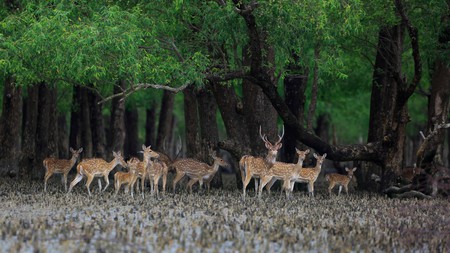 Two decades ago, a local honey collector came face to face with a Bengal tiger in the Sundarbans, a mangrove forest on the border between India and Bangladesh that is notoriously famous for its man-eating tigers, and lived to tell the tale.

In almost countless shrines and temples dotting the hamlets and pancake-flat fields bordering the Sundarbans, you’ll see the same striking tableau. There, among the altar’s diminutive human figurines, is a garish snarling tiger, its open mouth and bared teeth seemingly seconds away from dispatching its victim, typically a helpless cowering toddler. 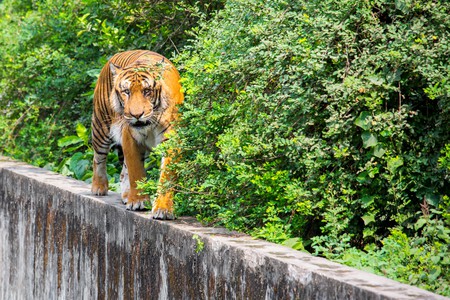 The story of Banbibi (also known as Bandevi), the guardian or goddess of the forests, is one of the best-known folk tales of the Sundarbans region. Spread among the vast creek-veined, island-filled estuaries of several rivers in the Bay of Bengal, the Sundarbans is among the world’s largest mangrove forests. Now a UNESCO Biosphere Reserve and World Heritage site, its over 10,000 square kilometres (108,000sq ft) are shared between India’s West Bengal state and neighbouring Bangladesh.

Like the boundless mangroves themselves, the Banbibi/Bandevi tale straddles cultures as well as countries. For both the Hindus and Muslims in the region, these deities are acknowledged and appeased if not worshipped outright – especially before foraging for wild honey, collecting wood and fishing trips. 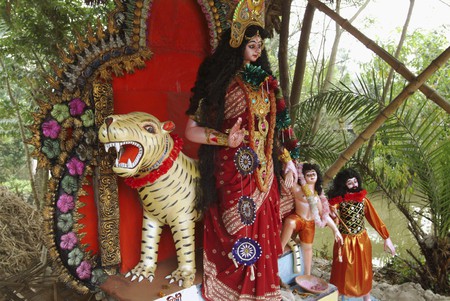 In local lore, Banbibi’s arch-rival is Dakshin Rai, the ‘god of beasts’, who bears more than a passing resemblance to a tiger whose form he often cunningly adopts. On an extended honey-collecting foray deep into the forest, Dhona, a simple villager accompanied by his young nephew Dhuke, carelessly forgets to appease Dakshin with a suitable offering.

So, as the days pass, Dhona’s foraging proves fruitless. Then, in an unsettling dream, wicked Dakshin promises honey and wax in return for the sacrifice of the helpless child. Abandoned by the amoral Dhona to his ghastly fate and about to be mauled by a tiger, Dhuke remembers his mother’s advice to implore goddess Banbibi in times of trouble. His exhortations pay off, and he eventually returns home safely on the back of a crocodile. The deities agree a kind of respectful truce, but Banbibi’s stock has risen; henceforth, and to this day, she is the Sundarbans’ essential go-to goddess.

Twenty-four years ago, villager Binoy Mondol and 12 adult companions set off for the forest to collect honey just like the fabled Dhona. As with countless past expeditions, their humble skiff headed south away from Dayapur island. They paddled into a maze of meandering creeks and mostly mangrove-lined channels dotted with phoenix palms. To unaccustomed eyes, they all still seem virtually identical, their flat muddy profiles and navigability constantly changing with muscular daily tides.

By now the tide was out, and thick gloopy mud smudged the peculiar spiky roots of endless thick mangroves. Having moved away from another moored skiff, Binoy’s group eventually found a suitable spot near swamp forest to drop anchor.

“Suddenly I glanced up…and saw the tiger just yards away. It looked like it was about to pounce on my friend. Some of the others panicked and fell into the water, then somehow it seemed I was closest to the animal.”

In the mad fleeting chaos, Binoy grabbed the tiger’s ear just as it sprang. He flung mud at its face and probably right into its eyes, an act that surely saved him despite the tiger’s lunge. The animal retreated, and Binoy and his terrified companions sailed back to Dayapur where, badly wounded, Binoy spent 12 semi-delirious days in a basic hospital. The friend he tried to save didn’t fare quite so well; after going into shock, he eventually succumbed to fever.

In the light of a flickering campfire, 70-year-old Binoy raises his shirt to reveal a dimpled ribcage and an ugly scar. “It took me seven years to [pluck up the courage and] return to the forest…but after fishing and crabbing, this is the only job I know.” His was, and remains, the riskiest undertaking, for it is honey collectors who venture deepest into the forest, often crawling unprotected through dense undergrowth with minimal vision. Yet, he was attacked in the open by a boat, showing that even fishermen are at risk.

For centuries, the region has been synonymous with terrifying beasts, among them crocodiles, sharks and snakes, but tigers have loomed largest. The 9th-century Pala Dynasty inscriptions refer to a “forested seashore infested with tigers”. In the mid-1600s, French physician-traveller François Bernier noted how they swam from island to island and suggested that boats should be tethered at a distance from shore because tigers were apt to skulk aboard and carry away sleeping sailors, usually the “stoutest and fattest”. 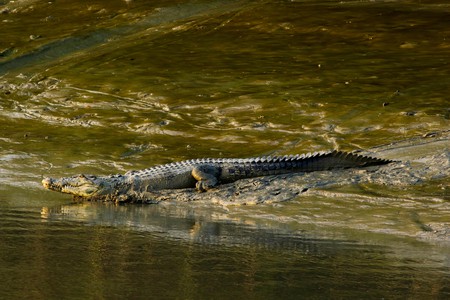 Even the typically sanguine British seemed rattled by the Sundarbans tigers’ reputation. When the son of Sir Hector Munro MP – former army officer and Raj-era grandee – was killed in 1792 while hunting deer, the incident became a cause célèbre widely reported in the British media and retold many more times in natural history tomes and adventure tales for children.

Later, as the Raj glimpsed lucrative opportunities in the region’s swamp forests, land was cleared for workers’ settlements. But it was soon apparent that man-eaters were a serious obstacle, and from 1883 administrators announced the first of a series of increasing bounties for tiger skins and skulls.

Depending on how you look at it, Binoy was lucky. According to a World Wide Fund for Nature-India study, between 1985 and 2008, 789 people were attacked by tigers in the Sundarbans, out of which 666 died. In 2018 alone, tigers claimed at least 12 victims in and around the tiger reserve. Most incidents now occur only when villagers venture into the forests and mangroves.

For decades, the authorities have been trying to reduce man-tiger conflict, but the pressures – population, environmental, dwindling resources and land – remain considerable. Measures range from the prosaic to the exotic.

Nearly 100 kilometres (62mi) of nylon fencing separating fields from forest has helped stem tigers from straying into villages. Inspired by nature’s own false eye-spot defence, from the late 1980s forest-gatherers and fishermen were issued with moulded face-masks to be worn on the backs of their heads. Tigers generally attack from behind and the guise appeared, at least initially, to have worked. Yet, swayed in part by the animal’s reputation for stealth and cunning, these days not everyone is convinced. Even Binoy admits to brandishing one simply for appearances and regulations: “They’re uncomfortable,” he laments, belying a more complex attitude to these city-folk imports.

The last published tiger census in 2018 estimated 88 tigers residing in the protected reserve, with perhaps 20 in adjoining areas. Their numbers appear to be on the rise. Last year, citing evidence gained from over 400 pairs of camera traps, local media reported tiger sightings in places that had never previously recorded them.

No one is certain why they’re so aggressive. Speculation ranges from the particularly saline water rendering them constantly irritable – and so compelled to offset the salt with ‘sweet’ flesh – to regular cyclone fatalities habituating them to easy human meals. Long inhabiting such a wild and isolated region, they might simply be born fearless. Or perhaps in this tough watery environment where they willingly swim for miles, virtually anything that moves is worthy prey.

Binoy now seems almost philosophical about his encounter. “I went into his den,” he says, “the tiger didn’t come to mine.” The respect may not be mutual, but for Binoy’s part it’s rather more than grudging. “Without tigers,” he says, “the forest would probably be gone.”