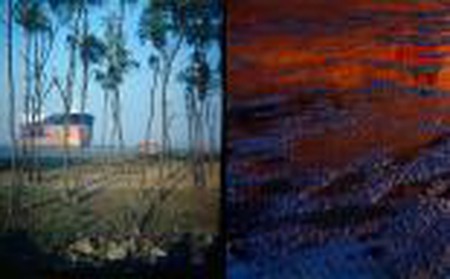 Shumon Ahmed uses photography to record a new history whilst rewriting its past. His multiple pictures of Bangladesh show the angst, isolation and sprawl of the modern metropolis, argues Rajesh Punj. 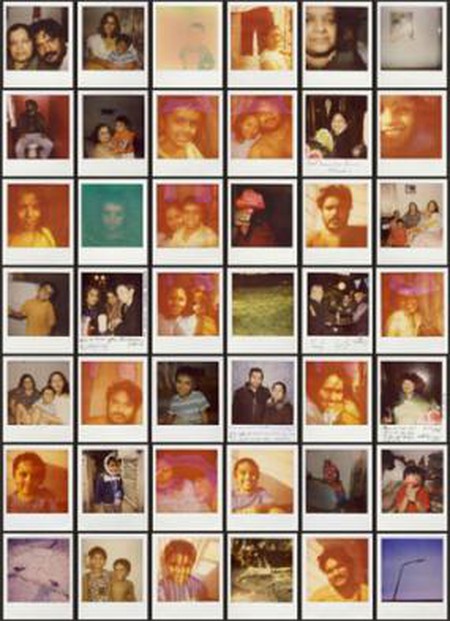 Photographer Shumon Ahmed lives and works in Dhaka, Bangladesh; a country plagued by extreme weather conditions but equally blessed with fertile land. Since he was a boy, Ahmed has watched his mother country become something uniquely its own. Because in spite of the jarring climatic and agricultural fluxes, aesthetics has come to the fore and the Bangladeshi contemporary art scene reflects a more positive potential for the county’s cultural and social structures; culminating in the inaugural Dhaka Art Summit.
Deservedly, Shumon Ahmed has participated in this exhibition, and was like-wise invited to exhibit at the 2010 Whitechapel Gallery show Where Three Dreams Cross, 150 years of photography from India, Pakistan and Bangladesh. Showing for the first time in London, Ahmed participated with a cornucopia of emerging and established photographers from three closely inter-connected countries — all of whom have used the camera to define and rewrite their own cultural histories. In Ahmed’s case, it is an engaging protest against the ignominy of being branded by the west as a geographical catastrophe.

Well versed in his professional practice, Ahmed handles a camera as an extension of himself. He is of a quite radical generation in Bangladesh that is actively seeking international recognition for their art, conceiving photo-works that are challengingly absorbing. Coming to photography purely by chance, Ahmed was given a small leather camera whilst still an inquisitive teenager and rigorously began picturing his city as if an alien citizen, capturing and then collating a swath of disposable images of Dhaka’s dilapidated interior spaces and its multitude of people industriously manufacturing their lives for the city. Trigger happy, Ahmed poured over the city and sub-consciously built up a tool-box of visual approaches to reality, photographs of bleak misfortune as much as positive hope. Going on to study photography in Denmark, Ahmed has a balanced eye that is uniquely as European as it is Asian.
For a recent solo show in Bangladesh, Shumon Ahmed drew on a series of photographs that deal very broadly with the notion of portraiture. Likened to an ethnographer perusing over the world with a magnifying glass, Ahmed’s works are positively divided between a colour series from his time in London, and a sepia toned and black and white series of the coastal belt of Chittagong and Dhaka, Bangladesh, that collectively appear to define two visions of a world turning in the face of relentless modernity. 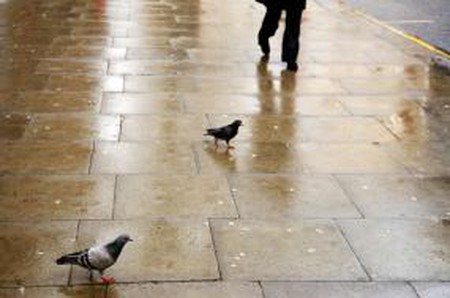 Ahmed’s work focuses both on his fleeting visits and on his more permanent residency in two very different metropolises. The subdued scenes of central London with their foreboding apartment blocks, warbling pigeons and the light soak of rain are combined with the almost apocalyptic images of the coastal stretch of Dhaka and Chittagong, which are identified as much by the city’s modernity as the poverty and squalor. With his sepia toned series, Ahmed positively bleaches out images of gargantuan ships rising up from the shallow waters off the coast of Chittagong, recalling tanker graveyards, from where a vast quarantine of ailing ships are systemically stripped of their steel by an army of scantily clad work-men. In all of these photographed works, some symbols and motifs reappear time and again, as they effectively act as the signifiers for specific locations. For Ahmed, such motifs define a narrative that records the intrinsic burdens of an industrial city. They are in stark contrast to his depiction of London, where he photographed a rather bleak cityscape where natural light is hemmed in by constructed chaos.

For the ‘I’ series Ahmed devises of a dual self-portrait that depicts him sat cross-legged under a biblical tree, wrapped in a dirt coloured shoal. Ahmed repeats the posture in the ordered aisle of a hyper-modern supermarket, dressed in denim and trainers. The shift from one to another is quite startling, and it proves an engaging commentary of the glory and guilt of modernity. In another photo, he is bent double in the motion of prayer on a carpet of cracked earth, where he is either pleading for the rains to come or more perversely, celebrating the catastrophe of his climate. Poignantly in another diptych from the series, Ahmed is creased up in anguish by the physical and emotional decline of one’s circumstances. Bicycle rickshaw seats overrun by the long grass are photographed beside a hyper-modern stretch of dual carriage-way from Dhaka’s city centre. Polluted by the ills of ceaseless traffic, the image is punctuated by the demonstrative figure of Ahmed holding aloft a coloured image of a bright yellow Lamborghini. Such conscious collisions are at the centre of Ahmed’s exploration of ‘I’ and ‘Mine’; the yellow Lamborghini, an object of our collected desires. In another photograph from the series, Ahmed is holding the iconic symbol of global modernity — the red and white coloured Coca Cola can — which is beside a composed shot of an industrial mountain of compressed aluminium cans. In fact, the strength of Shumon Ahmed’s photo-works and of these troubled landscapes precisely lies in their unbridled spirit. 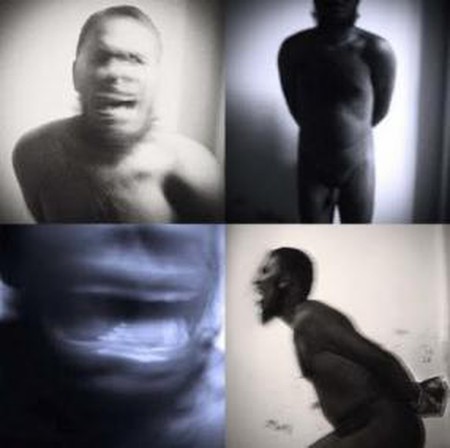 Land of the Free | Courtesy the Artist

In the Land of the Free, Ahmed challenges our understanding or lack of it of America’s holding pen for terrorist suspects, Guantánamo Bay. He befriended and subsequently photographed Mubarak Hussain Bin Abul Hashem, the only recorded Bangladeshi prisoner to have returned from Guantánamo to date. Ahmed’s collected photographs vividly evoke something of the drama and devastation of wrongful imprisonment and, through staged imagery propositions, the humiliation of having to endure episodes of torture. Hashem, or enemy combatant number 151, was flown back to Dhaka, Bangladesh, on December 17th 2006 on a US combat plane, after having spent five years at Guantánamo. Besides the montaged images of aggressive dogs incessantly barking, CCTV footage of a hooded suspect held under duress, and a naked figure encased in a dimly lit room; possibly the most pertinent image of them all is that of Mubarak Hussain standing at the fore-front of a cultivated field enveloped in mist. Standing in traditional Bangladeshi dress and hooded with a cotton shawl, the overwhelming silence of this particular image is almost deafening. 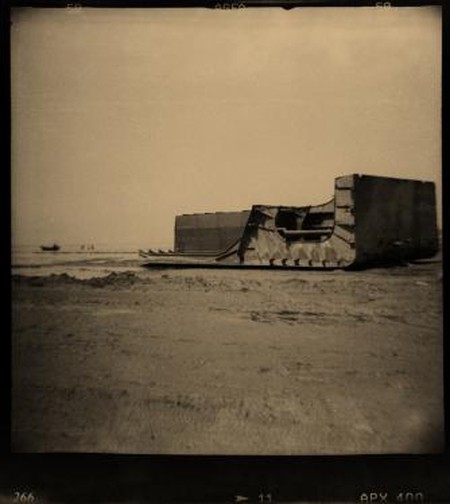 Given there is clearly a dreadful impossibility to the majority of these images, a helplessness that wells up like a cancer, as his world appears to be being torn asunder by man and machine; Ahmed manages to imbue his images with an element of humanity, even scenes of the most heinous circumstances. Introducing a greater level of intimacy to his works, Ahmed re-photographs torn sentences from hand written letters from his elderly mother to him, that record a life blighted by suffering, appearing to mirror the plight of ‘mother earth’ as it is cultivated by industrial machinery for vast structures dedicated to modernity. For Ahmed these are deeply personal works which explain his intrinsic relationship with his mother; whom Ahmed for many years thought was mad. The turning point for Ahmed was discovering her suffering was as a consequence of a mental and emotional deficiency that had for a long time cast her as unprincipled and irrational.

Not solely preoccupied with the role of the photographer, Ahmed fuses video, text and photography for a visual exploration of ideas and emotions. His works are as motivated by international aesthetics as they are informed by his own circumstances. They have previously been included in the Chobi Mela Photo Biennale V and VI, and at the Fotomuseum Winterthur, in Switzerland. The photographer was also significantly involved in the Dhaka Art Summit 2012. This inaugural art fair was a collaboration between the Bangladesh National Museum and Shilpakala Academy of Fine and Performing Arts. For this fair, Dhaka has drawn on the significant elements of Bangladesh’s emerging contemporary art scene, including works of sculpture, painting, installation, photography and digital art; which were shown under the umbrella of eighteen core galleries.