ASIA
/
BANGLADESH
/
Things to Do

Bangladesh is a country proud of its contemporary arts scene – from the late forefathers of modern Bangladeshi art like Shilpacharya Zainul Abedin and Quamrul Hassan, to the new generation of burgeoning talent. With young galleries opening up alongside established art spaces, and events like the Dhaka Art Summit and Asian Art Biennale, contemporary art in Bangladesh is currently enjoying a comeback. What better time to explore capital city Dhaka’s many galleries?

A clean, open and minimalist gallery, Bengal Art Lounge is overseen by the Bengal Foundation, a local organisation that promotes Bangladeshi culture. Located in the upscale Gulshan neighbourhood, the gallery was opened in late 2011 as a commercial exhibition space designed to make the work of artists both local and international, both renowned and rising, accessible to the Bangladeshi public. Bengal Art Lounge regularly works with international organisations based in Bangladesh to showcase art from outside the country as it did with the Italian Embassy and Bologna-born artist Sabrina Mezzaqui. A recent exhibition, Very Graphic: The Art of Storytelling in Graphic Detail, celebrated graphic arts and featured Bangladeshi political cartoonist Shishir Bhattacharjee as well as British graphic novelist Karrie Fransman.

Founded in 2010, Dhaka Art Centre is a non-profit organisation situated in the bustling Dhanmondi district that was established to encourage the production of contemporary visual art in the country. The centre features six different sizeable gallery spaces for the exhibition of paintings, sculpture, video and other visual art forms, and is also home to an auditorium where it regularly screens both short and feature length films and videos. In the past, Dhaka Art Centre has hosted such exhibitions as Hidden Canvas: Impression of Urban Life, a series of paintings and photographs of the urban landscapes of Dhaka and Philadelphia by Bangladeshi artist Mashiul Chowdhury who now calls the US home, and Raihan’s 71, hard-hitting images of the Bangladesh Liberation War by photographer Abdul Hamid Raihan.

Gallery Jolrong started out as an online portal through which art lovers could access information about Bangladeshi arts back in 2007. Since then, it has expanded its operations into a physical gallery space with the ethos of promoting art exclusively native to Bangladesh to audiences across the globe. Its indigenous art exhibitions have featured promising, upcoming artist Nazir Hossain with his show Pater Gaan, Banglar Bagh, which paid homage to pata chitra, a traditional style of Bangladesh folk art drawn on scrolls and the country’s national animal, the Bengal tiger; another highlight was Native Rhythm, a show coinciding with the Bengali New Year and celebrating the rhythm of life in Bangladesh, which featured renowned native artist Abdus Shakoor Shah and folk artist Raghunath Chakroborty.

The Athena Gallery of Fine Arts is a non-profit gallery and the brainchild of CEO Nilu Murshed, a devoted art enthusiast and collector who established Athena with the intention of bringing Bangladesh’s arts and culture scene to an international audience. A fairly new addition to the Dhaka contemporary arts community, the Athena Gallery of Fine Arts opened its doors in 2012 and exhibits artists at all stages in their career – from prominent Bangladeshi painters to young artists just starting out. Alongside a number of regular photography and painting exhibitions, Athena Gallery also has a permanent collection of art which includes works by the late Quamrul Hassan, a respected Bangladeshi artist who mixed traditional folk arts with modern cubism.

Revived art space Gallery 21 first opened back in 1997 and was in operation until 2003, when owner and artist Shameem Subrana was forced to close the gallery doors. Thankfully, Gallery 21 is back with a bang and Shameem is hoping to recreate the buzz and enthusiasm the original gallery had. Since reopening in the spring of 2013, Gallery 21 has exhibited a number of works by Bangladeshi contemporary artists. Its debut exhibition featured prominent painter Syed Jahangir, female artist Fareha Zeba and owner Shameem Subrana herself. Other events have included a photographic exhibition commemorating the 88th anniversary of the birthday of Tajuddin Ahmed, the first Prime Minister of independent Bangladesh who died in 1975, curated by his daughter Simeen Hossain Rimi.

Bengal Gallery of Fine Arts, Dhaka | © Bengal Gallery of Fine Arts
Another offshoot of the Bengal Foundation, the Bengal Gallery of Fine Arts was established in 2000 to kindle an interest in art in Bangladesh. The gallery also works hard to promote native art and has done so by establishing partnerships with art communities in cities across the world including Tokyo, Toronto and New York. Residing in a beautifully renovated building, the art space is surrounded by a tranquil garden filled with bamboo and fragrant kathal chapa flowers. Recent exhibitions have included Eternal Japan, a series of photographs by Japan-based Bangladeshi journalist Monzurul Huq depicting his perceptions of the Japanese lifestyle, and Shilpacharya and His Outer World of Art, an exhibition celebrating the birth centenary of Shilpacharya Zainul Abedin which featured his work, as well as pieces by his artistically talented family.

Coupling the works of both Bangladeshi and French artists in one gallery space, La Galerie is a branch of the Alliance Francaise de Dhaka, a non-profit organisation that promotes French culture in Bangladesh and Bangladeshi culture in France. One of the most well-known galleries in the country, La Galerie holds over 20 different exhibitions each year, ensuring visitors have new, refreshing artworks to view. The focus of La Galerie’s frequent exhibitions has ranged from the political, with Bangladesh-born photographer Simon Yusef’s first solo exhibition Life and Struggle of the Padma, which explored the lives of Bangladeshi people living around the Padma river, to the traditional, with painter Bipad Bhanjan’s Colour of Natural Disposition show, a series of paintings depicting the everyday lives of people living in Bangladeshi villages inspired by his childhood.

The largest privately owned gallery in Bangladesh, Drik Gallery is split over two floors and boasts an impressive 2,796 square feet of total gallery space. A mainstay in the Bangladesh art scene, Drik Gallery has been in operation for over twenty years since August 1993 when it hosted the first showing of the World Press Photo contest in the country. It has since held many successful exhibitions such as Tragedi Noi Hottakando, a touching collection of observations, both real and imagined, of the recent Rana Palace collapse in Savar which killed over 1000 garment workers, and Silent Miracle, the first showing of Indian photographer Soumitra Datta’s work in Bangladesh, depicting the beautiful landscapes of India and Bangladesh.

Established in 2000, Gallery Chitrak celebrated its 12 year milestone by moving to larger premises just off the busy Mirpur Road in affluent Dhanmondi, and opened with an exhibition featuring the art of 60 Bangladeshi modern artists, including abstract expressionist Reznaun Nabi and esteemed sculptor Abdur Razzaque. Under the leadership of executive director Md. Muniruzzaman, Gallery Chitrak, alongside showing the work of renowned Bangladeshi artists, focuses on promoting the work of young, local artists such as upcoming painter Nazmul Haque Bappi whose recent solo exhibition, The Oriental Life, inspired by the painting techniques of the Orient, depicted the simple, pre-consumerist lifestyles of traditional Asian communities.

The Department of Contemporary Art and World Civilisation, launched in 1975, is one of the four curatorial departments at the longstanding Bangladesh National Museum. The Department features seven galleries of paintings, sculptures and tapestries representative of contemporary Bangladeshi art, alongside a number of artefacts of civilisations from across the world, including the USA, China and Egypt. Amongst the Department’s collection of works is art by modern folk artist Quamrul Hassan and internationally renowned painter S.M. Sultan. One gallery is dedicated entirely to Shilpacharya Zainul Abedin, widely considered as the father of modern Bangladeshi art. Beyond its permanent collection of art, the Department also arranges regular exhibitions and plays a leading role in the Asian Art Biennale, a national event that promotes Asian art to international audiences. 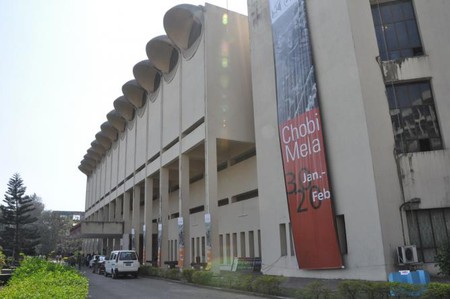 © Bangladesh National Museum
Give us feedback