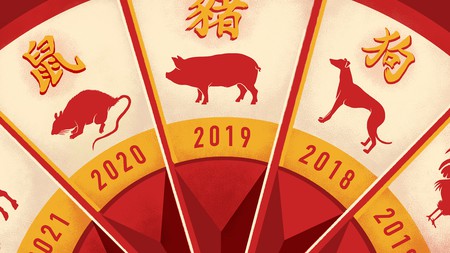 On Lunar New Year across East and Southeast Asia, the story of how 12 animals ended up in the Chinese Zodiac – and its counterparts across the region – is told in various ways. This telling involves an emperor, a race and a friendship that dissolves into an eternal feud.

Depending on the country celebrating Lunar New Year, the story of how the zodiac got its animals varies.

In some, the animals are called by the Jade Emperor to compete to be his guards, their placement in the race determining their rank. In one, the ox only offers the rat a ride if it promises to sing for the entire journey – though, if you have ever been subjected to a private serenade, you may be forgiven for mistaking this payment for punishment. The Vietnamese telling has the cat make it across the river in place of the rabbit, and, instead of an ox, a buffalo occupies the second place in the zodiac.

Regardless of how the story is told, the animals are used to mark days, hours and months, with each one lending its own particular characteristics – the hours from 11pm to 1am are associated with the rat, for instance, because it is most likely to scavenge during this time.

The zodiac animals also imbue those born in their years with these characteristics – pigs might not always be the centre of attention but they’re swift to action when others are all talk; dragon women are fierce overachievers, who you’d be a fool to underestimate; and the kindness of rabbits belies a well of inner strength.

So, without further ado, here’s the Culture Trip version of how the zodiac got its stars.

When the Jade Emperor – the Emperor of Heaven and Earth – decided it was time his earthly subjects were given the means to measure the passing of the seasons, he turned to the animal kingdom for help. Each year in the calendar’s 12-year cycle would be marked with an animal.

The news was met by eager ears, but there was a problem. There were far more than 12 animals, and each wanted a place in the zodiac.

The emperor decided he would hold a race to determine which of the animals he would include. The animals, anxious to have their names written among the stars, were tasked with swimming over a river with a particularly swift current. The first 12 to make it across to the emperor would win a spot.

For some, the task was easy; others needed to get a little help from their friends.

The rat and the cat, excellent friends but inept swimmers, enlisted the help of the good-natured ox. They asked if they could ride on its back so all three could cross the finish line together. The ox heartily agreed, and the plan was set.

The unlikely trio set out to win, and, though the ox was slow on land, it was a strong swimmer and made up time in the water, soon pulling ahead of the others.

The cat and the rat were overjoyed that their plan was working, but the rat had its sights set on glory. It pushed the cat into the water and, once safely on the shore, leaped from the ox’s back and scurried across the finish line to claim the first place in the zodiac, with the ox lumbering behind to take the second.

In their wake came the tiger. Tired from fighting the strong current, it was relieved to take third place.

Soon after, the rabbit came bounding through in fourth place, though it didn’t escape unscathed. While hopping from stone to stone in the river, a misstep plunged it into the river; luckily, it was able to climb onto a floating log and a gust of wind propelled the vessel to the riverbank.

Next came the dragon, soaring effortlessly through the clouds to land at the Jade Emperor’s feet. The emperor, confused by the dragon’s failure to win (it did have the advantage of flight, after all), asked the dragon to explain what had happened.

The dragon, ever so charitable, was delayed by his efforts to extinguish a fire in a farmer’s field and to blow the troubled rabbit across the river to shore. Touched, the emperor inducted the dragon as the fifth animal of the zodiac.

At this point, the horse came galloping out of the water, well on its way to claiming the next spot, only to be startled when the snake came slithering up. The horse reared in shock as the snake calmly crossed the finish line to claim the sixth place and relegate the horse to seventh.

Not long after, the dog came charging out of the water to 11th place. As the best swimmer of the group, the others thought the dog was a sure winner, but it was having too much fun playing in the water to worry about the race.

The eleven winners waited alongside the emperor, eager to see who would earn the final spot. Their answer came in the form of a loud grunt. The pig, left hungry by the treacherous crossing, had stopped on the riverbank to search for food. Belly full, it had taken a quick nap, only to wake in fright, worried there would be no spots left to claim.

The poor cat, washed up on the wrong side of the river, looked on in despair as the emperor and his 12 champions celebrated. Bitter with betrayal, the cat swore vengeance.

Its ancestors have been enemies to rats ever since.

This is an updated version of a story created by Ciaran McEneaney.