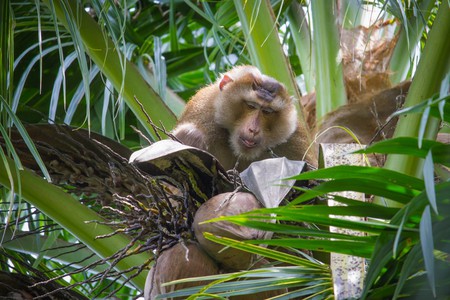 A pig-tailed macaque scampers effortlessly up a 50-foot palm as his handler watches from below. A coconut rustles down from above. Then another. And another. In a matter of minutes dozens have been twisted, pulled and thrown to the ground. It’s a scene common throughout southeast Asia, monkeys harvesting coconuts. Only recently has the question arisen: “is it ethical”?

The practice of using monkeys, apes, or even baboons to collect fruit is nothing new. Egyptian carvings and rock paintings dating back more than 3,000 years depict figs and palm fruits being harvested by our primate friends. In 1885, writing of ancient Egypt, Adolf Erman noted that when trees were too weak for humans, people would “send tame monkeys” in their place. 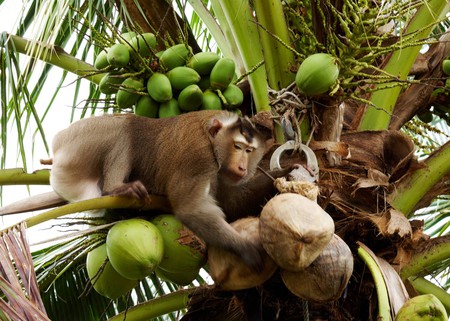 The practice is thousands of years old | © omers/Shutterstock

In the late 19th century when Dr. Max Weber and his wife were sent to explore the East Indies by the Dutch government, they as well observed the phenomenon. During their time in Sumatra the doctor wrote the following:

“…a Malayan family…owned two Lampong, or Lapond, apes (Macacus nemestrinus), big, impudent beasts, which had been taught to pick coconuts. For this purpose, a band, to which a long rope was attached, was tied around the body of the ape, and then the animal was chased up into the tree. Arrived there, the ape seated himself on a branch and began to twist with his hands and feet one of the coconuts that hung under the branch, until the stem broke and the fruit fell down. If he dallied too long over his work, the strap around his body was jerked unsympathetically.”

In the early 1900’s Italian explorers of nearby Borneo witnessed more of the same. The practice recorded and depicted over millennia seemed commonplace in the past, but just how normal is it today?

It turns out that using monkeys in coconut plantations has remained quite common in Southeast Asia. However, it wasn’t relatively well known to much of the outside world until 2012 when an animal rights group based out of California contacted NPR about the alleged exploitation and abuse of so-called monkey slaves. The group’s claims were based entirely on YouTube videos showing monkeys jumping from tree to tree attached to long leashes. And, while the allegations never gained much traction, they did lead to a conversation on the ethics and commonality of the practice. 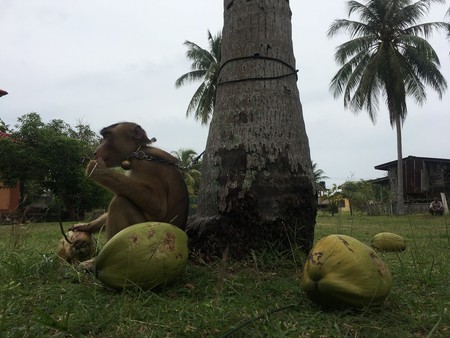 Some suggest that 99 % of coconuts in Southeast Asia are picked by monkeys, others, particularly those representing large companies that use coconuts from the region in their products, suggest the number is far smaller. Of the large coconut water companies we reached out to, only Vita Coco responded, stating that they did not use monkeys in the harvesting of their coconuts. While it would be impossible to verify if the actual percentage is 1 or 100, what is certain is that in Thailand, Indonesia, and Malaysia monkeys are openly trained to harvest coconuts.

In northern Malaysia, Wan Ibrahim Wan Mat has spent the majority of his life training macaques to pick fruit. He claims he can train a monkey to pick up to 800 coconuts a day, far more than any man, making his $38-course worthwhile. Over the years Wan has stated that animal rights groups have protested the nature of his work, yet he insists that any monkey he’s trained or worked beside has been treated with kindness, love and respect much like a household pet. Furthermore, the head of the Malaysia Animal Welfare Society, Shenaaz Khan, has stated that she finds nothing wrong with the training of macaques to farm coconuts. She only finds fault with a system that makes it impossible to monitor the monkeys once they’re returned to the labor force. 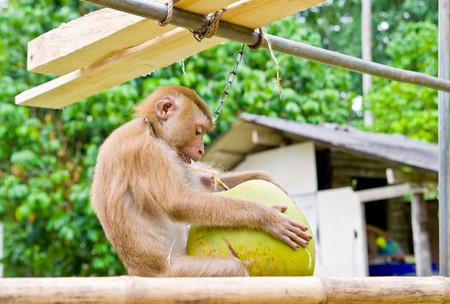 Although the conversation originally revolved around the treatment of monkeys on coconut plantations, there should have been a deeper set of questions asked. Most notably, where do the monkeys come from?

For decades, palm oil (not to be confused with coconut oil) had been used in cosmetics. However, its recent addition to snack foods has led to a surge in palm production. This in turn has made the palm oil industry the leading cause of deforestation in Indonesia and other equatorial nations. In Indonesia, the Leuser ecosystem home to forest and marshlands sheltering more than 200 mammals, including many primates, lost over 18,000 hectares to the palm oil industry between 2015 and 2017.

Currently, 60% of primates around the world are threatened by extinction due to habitat loss. In Southeast Asia, the natural habitats of macaques and other monkeys diminish by the day. While concerns of the treatment of monkeys used in the coconut industry may or may not be valid, what is absolutely certain is the forests they once called home are being destroyed at an entirely unsustainable rate. 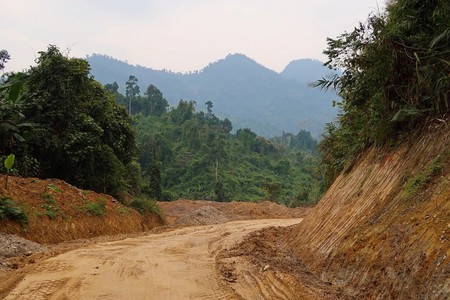 Deforestation in Vietnam | Sam Roth
Give us feedback