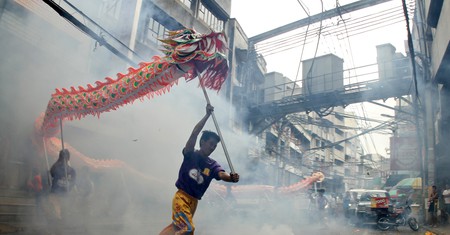 Take a look at how five Southeast Asian countries have come to celebrate one of the most important events in Chinese culture.

Fireworks, lion dances and the vibrant red that permeates streets, homes and clothes are signs of the Lunar New Year – a festive holiday marking the start of the Lunar calendar. The holiday is particularly important in countries like China, South Korea and Vietnam, where celebrations last anywhere from three to 15 days. This is an importance that carries into diasporas as well. Southeast Asia’s particularly long history of trade and emigration with China has led to large Chinese communities who celebrate the holiday with a little local flair. Here are five places where unique local traditions have been integrated into the Lunar New Year.

The bustling Binondo district in Manila is the oldest Chinatown in the world. Even before it was officially established in 1594, generations of Chinese settlers already lived, built their fortunes and raised families here. It’s no surprise the biggest Chinese New Year celebrations in the Philippines are celebrated in this historical neighbourhood. 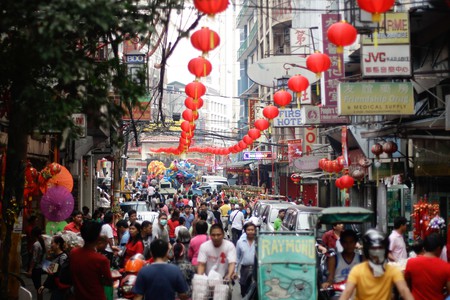 Drums fill the air, as do clouds of smoke from ear-splitting firecrackers. Vendors line the streets with tables of food, plastic toys and lucky charms that promise to usher prosperity into the new year.

The convivial vibe makes an interesting contrast against the long, solemn stream of people queuing to light candles and incense at the altar of Sto. Cristo de Longos. With the Philippines being majority Catholic (and highly devout at that), the iconic Binondo Church will be as busy as local Buddhist temples, where revelers stop for a moment of serenity amidst the festive frenzy. 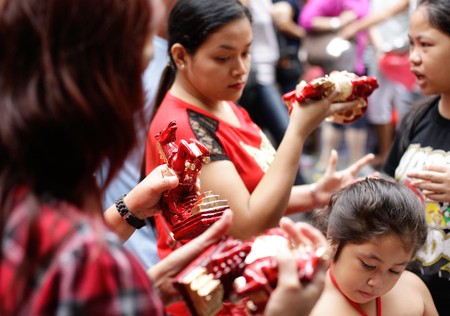 With nearly a quarter of the Malaysian population being of Chinese descent, Lunar New Year celebrations here are grand and vibrant. While the customary decor, dragon dancing and family gatherings fill the two-week celebration, a unique practice takes place on the last day of Chap Goh Mei (Hokkien for ‘15th night’).

On the 15th night of the Lunar New Year, young women were once said to have thrown mandarin oranges into the sea, with the belief that if her orange was fished out she’d find a good husband. It is no coincidence this is recognised as the Chinese counterpart to Valentine’s Day. The tradition is still continued in Penang today (albeit with less romantic intention).

On this day, oranges are widely sold at the Penang Esplanade in George Town. Many people – regardless of age or relationship status – buy one to toss into the sea, scribbling on a wish, or even their name and mobile number, on the fruit beforehand. Sometimes competitions are held where boys board boats to scoop out as many oranges as they can to win small prizes. 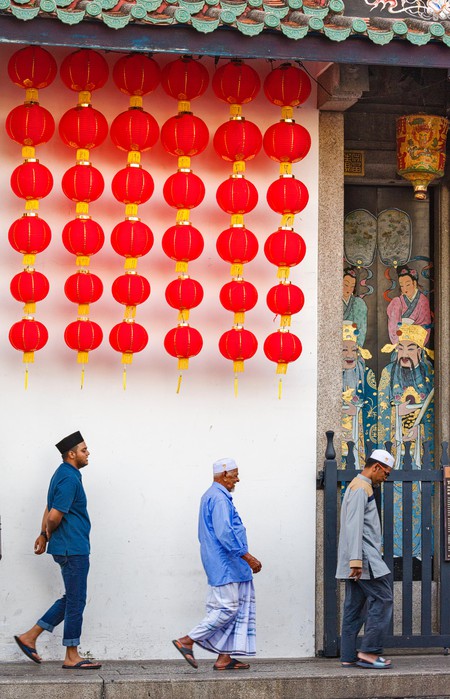 A sea away over in Indonesia, the history of the Chinese diaspora is much more complicated. Instigated by the racial divide imposed by the country’s Dutch colonisers, discrimination against the Chinese in Indonesia has stretched through centuries, sometimes leading to outright violent insurgencies. Riots as recently as 1998 particularly affected Indonesian-Chinese populations, and brought back memories of the 1740 Batavia massacre, where an estimated 10,000 ethnic Chinese were killed.

Despite discrimination – such as previous laws banning the public practice of Chinese traditions like LNY – people of Chinese descent in Indonesia have made their mark on the archipelago. One of the best examples is the city of Singkawang on Borneo, where 70 percent of the population is of Chinese descent, earning itself the nickname: “Chinatown of Indonesia”. 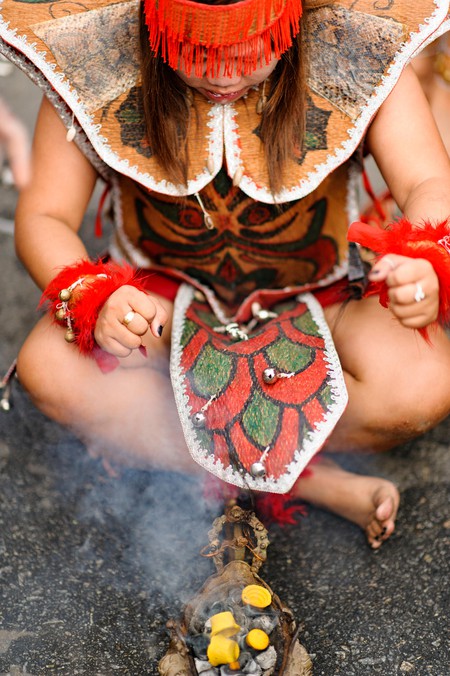 The shaman of Singkawang. This celebration is highlighted with the parade of the ancient of Tatung | © Muslianshah Masrie / Alamy Stock Photo

On the 15th and last day of Imlek (as Indonesians refer to the Lunar New Year), Singkawang celebrates Cap Go Meh in one of the most interesting and unique ways possible. Even more striking than the thousands of red lanterns that light up the city, the Tatung Parade is an incredible cultural fusion between the area’s ethnic Chinese and Borneo’s own Dayak people.

Tatung are mediums, believed to be possessed by gods or spirits and, following the right rules and rituals, can have extraordinary capabilities. This is exhibited in the Cap Go Meh procession where hundreds of Tatung men, women and even children, walk down the streets of Singkawang with sharp steel rods pierced through their faces, sit on thrones of nails and step on swords. Entranced, they stare blankly at the crowd or up towards the heavens through the steady rhythm of the drums, showing no indication of pain nor bleeding. This demonstration of strength and power is believed to scare evil spirits away, keeping the city safe. 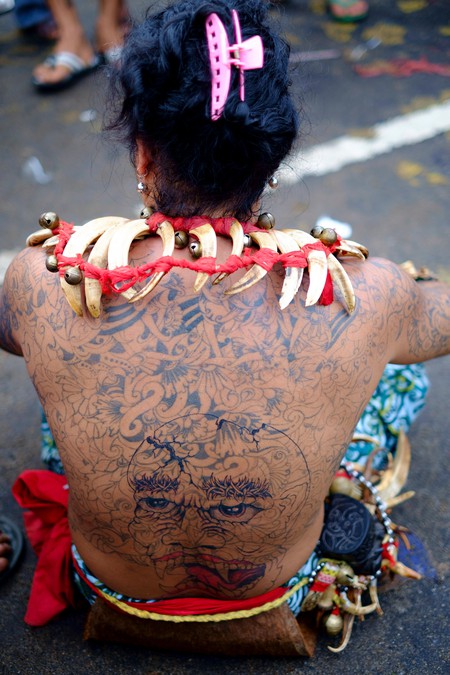 The shaman of Singkawang. This celebration is highlighted with the parade of the ancient of Tatung | © Muslianshah Masrie / Alamy Stock Photo

Thailand is said to have the largest overseas Chinese population in the world, with up to 40 percent of the population having some trace of Chinese ancestry. Even with Chinese communities well integrated into Thai society, many identifying as simply Thai themselves, Chinese culture is still widely celebrated.

Lunar New Year is only one of three New Year’s celebrations enjoyed in Thailand, falling between the Gregorian calendar’s on January 1 and Songkran (Thai New Year) on April 13 (recently extended to a five-day national holiday).

Bangkok holds festivities in the massive Yaowarat Chinatown, where a member of the Thai royal family, usually one of the princesses, is always scheduled to make an appearance and join in the fun. But even grander festivities take place in the less frequented province of Nakhon Sawan. In the district of Pak Nam Pho, residents honour their province’s guardian spirits as part of the Lunar New Year celebrations, creating a 12-day festival known as Pak Nam Pho Chinese New Year.

The most awaited days are the last ones, when impressive processions to honour the spirits take place along the city’s main streets. One is an evening parade of bright lights, colorful floats, illuminated dragons and performers in elaborate costumes. The other, scheduled the morning after, is an equally mesmerising procession of acrobats and dancers, believed to please the gods and bless the province. Many more performances, festive decor, markets and events are lavishly spread throughout the city, making Nakhon Sawan one of the most exciting places to welcome the new year. 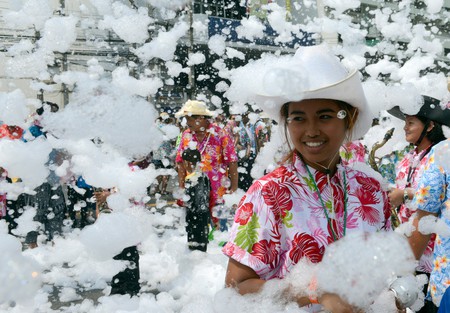 Cambodia’s ethnic Chinese population is one of the smaller ones in Southeast Asia, only making up about 0.1 percent of the country’s total population. Though still celebrated around the country, Cambodian-Chinese celebrations of Lunar New Year are less likely to have colossal crowds and extravagant parades. 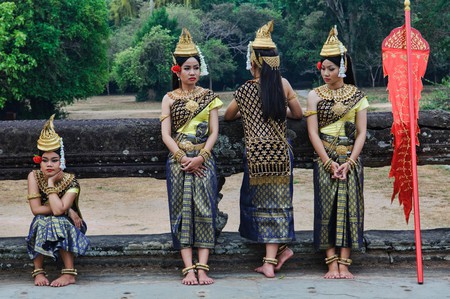 However, celebrations of the holiday are a sign of how Cambodia has worked to heal itself after the reign of the Khmer Rouge. From 1975-1979, the Khmer Rouge led an ethnic cleansing with a devastating death toll. Today, Cambodians of Chinese descent decorate their homes, have family gatherings over traditional meals and visit Chinese folk temples to pay respect to their ancestors without fear of prosecution. 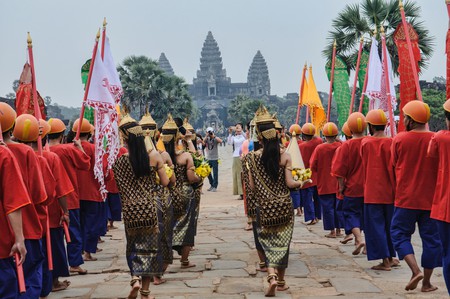