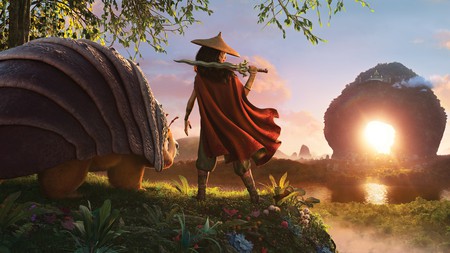 As an evil force threatens the kingdom of Kumandra, it is up to warrior Raya to save the day | © Walt Disney Animation Studios / 2021 Disney / All Rights Reserved

While we wait for travel to return, Kumandra – the fictional Southeast Asian-inspired backdrop to the new Disney Animations Studios feature Raya and the Last Dragon – is this year’s perfect spring escape. Travel to this spectacular land from the comfort of your own home and start dreaming of real-life trips to the countries that inspire brave warrior Raya on her epic quest.

On her exploration of Kumandra, Raya travels through five lands forming the shape of a dragon: Heart, Fang, Spine, Talon and Tail. Each land has a distinct ethos, culture, rituals and language, and presents a unique aesthetic. Producer Osnat Shurer assembled a team of anthropologists, architects, dancers, linguists and musicians, later known as the Southeast Asia Story Trust, to partake in several research trips to the region, including visits to Laos, Indonesia, Thailand, Vietnam, Cambodia, Malaysia and Singapore. It is this deep dive into Southeast Asian culture that forms the beautiful tapestry of Kumandra’s rich cultural and physical aesthetic.

A journey through Kumandra and Asia

Raya’s home, the flourishing and magic land of Heart, is marked by its distinctive rock formation that protects Kumandra’s legendary Dragon Gem. It’s located on a natural island, and the people revere the water that flows through its lands, so things in this land – including buildings, rooms and the distinct rock formation at the centre – look like rounded drops.

At the head of the Dragon River lies Fang, home to powerful, opulent people protected by a canal. “They’re all about power, so the structures are powerful and over-scaled,” says Shurer. The sharp repetitive rooflines evoke the precision and craft of its people, its richness reflected in luxurious marble and limestone.

At the head of the Dragon River lies Fang, home to a powerful, opulent people protected by a canal; pictured here is Virana, chief of Fang Land | © Walt Disney Animation Studios / 2021 Disney / All Rights Reserved

On the opposite end in Tail, the land is arid and sparse and home to a self-sufficient culture that has learned to exist and thrive in this desert landscape. The bleak surroundings have led the people to lead an improvisational life, and we see this reflected in everything from dress to buildings.

Spine, by contrast, is marked by its beautiful, cone-shaped, snow-capped mountains, and bamboo forests that are home to a fierce, protective warrior clan. Its frigid forest can be likened to Borneo’s sprawling bamboo landscapes, while its high-roofed, multi-tiered structures take inspiration from those found in Laos and Indonesia. In the details of personal objects and interior decor, we see traditions characteristic of the Philippines, where large wooden spoons and forks are hung around the home in a practice intended to summon prosperity and health.

Talon, at the centre of the five lands, is home to a bustling marketplace of traders and merchants thanks to its central location along the Dragon River. Inspired by the floating markets in waterways on the Mekong, and by the night markets of Thailand and Laos, this site is an important juncture of Raya’s journey.

Putting the world together

Production designer Paul Felix was particularly inspired by the way in which everything in Southeast Asian daily life, from fabrics to food, is rooted in sociocultural significance. “There’s a deeper meaning relating to their culture and their village, which ties into everything that they do,” says Felix.

We see this reflected in the details of the film. In Talon, for example, the marketplace stalls feature spirit houses that are typical of Southeast Asia. These miniature shrines are not merely ornamental: they are placed outside homes and businesses with offerings – from fruits to incense – to call on spirits and attract prosperity and good business.

Talon, at the centre of the five lands, is home to a bustling marketplace of traders and merchants | © Walt Disney Animation Studios / 2021 Disney / All Rights Reserved

The attention to cultural import and functionality are also manifest in the figure of Raya, from her dress, inspired by the breathable draping styles of Southeast Asia such as the sabai top and dhoti pants, to her fighting style, an amalgamation of Southeast Asian styles.

In many ways, Kumandra reminds us of the unique but connected parts of the region. The foods on offer, for example, are Southeast Asian staples, each with its own country-specific variation – from congee to the hearty Kumandran soup that uses many ingredients local to the region, such as shrimp paste (from Tail), lemongrass (from Talon), bamboo shoots (from Spine), chillis (from Fang) and palm sugar (from Heart).

Indeed, this cultural reimagining of Southeast Asia in a new, animated, fantasy adventure pays homage to the diversity of the region and also reminds us of the power of imagination to transform both our inner worlds and our living rooms.

Disney’s Raya and the Last Dragon is available on Disney+ with Premier Access now.