A Tour of Basilica of Bom Jesus in Old Goa, India 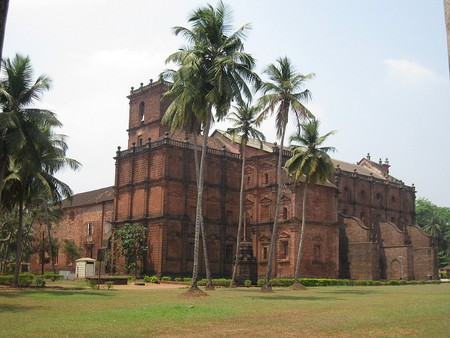 Familiarity breeds contempt, they say. But the Basilica of Bom Jesus in Old Goa is an exception to the rule. The more you see her, the more you want to know her. One just can’t seem to get enough of this church, the construction of which was completed in 1605.

The most fascinating aspect of this basilica is that it holds the 474-year old mortal remains of St Francis Xavier, the famous Spanish missionary. The body can still be found in a well-preserved state and is taken down for public viewing every decade. The significant event, followed by a nine-day prayer routine, festivity and public mass attracts people of all religions across the globe. So, if you missed your chance in 2014, earmark your calendar for 2024. 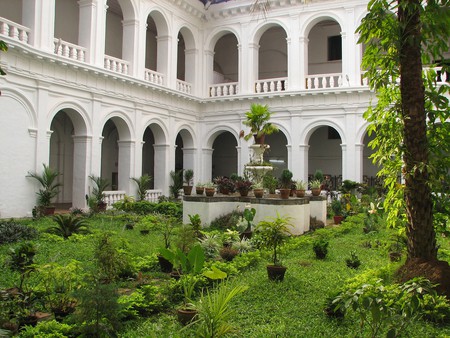 Courtyard of the Basilica of Bom Jesus | McKay Savage / Flickr

If you haven’t visited the Basilica of Bom Jesus during your time in this coastal region, don’t bother telling folks you’ve visited Goa. The basilica puts Goa on the heritage-world map and it would be a travesty of justice not to visit her.

The craftsmen have combined the renaissance norm and baroque style of architecture to create the elegance of the basilica. The altars inside the church are a visual delight with age-old murals and inset designs.

The jewel of the church is clearly the chapel that houses the sacred remains of the body of St Francis. The chapel’s interior is adorned with rich paintings and carvings that take us through instances from the saint’s life.

And finally the pièce-de-résistance – the tomb is a vision in white marble! It is mounted regally on a red and purple jasper base, edged with stars, and embellished with bronze plaques that also depict St Francis’ story. Giovanni Battista Foggini, a well-known sculptor from Florence was commissioned to construct the tomb. Topping it is the silver casket that was designed by Marcelo Mastrili, an Italian missionary which contains the body of the miraculous saint.

After you have devoured the sights and history of the basilica, do take a breezy tour through the Basilica of Bom Jesus Art Gallery which is accommodated inside the basilica. This modern art gallery is worth a visit and is one of the largest in Asia.

Old Goa is an assortment of beautiful monuments and Basilica of Bom Jesus is clearly the apple of Old Goa’s eye. She stands tall, she ages well, she takes you through the glories of the past and commands your attention with her magnificence. So the next time you are in Goa, stay sober and ensure you give this basilica the time she deserves. For her rich history and beauty will leave you spellbound.