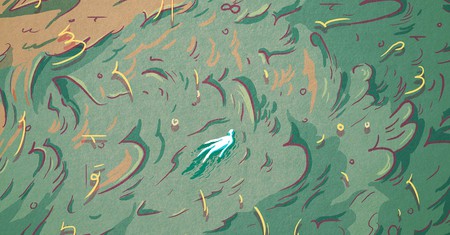 Tibetan is estimated to be spoken by just eight million people worldwide. The written text holds a legacy of ancient Sanskrit, which was created in order to translate Buddhist terms that were making their way into Tibet from India. Below is a list of beautiful Tibetan words that also describe key components of Buddhist philosophy and the Tibetan way of life.

This word is literally translated as ‘something that the mind cannot capture’, which is beyond the reach of human intellect. Although a human form is considered one of the lucky rebirths, the human mind is still not capable of everything. Therefore, deities and other superior beings are often described as ‘unfathomable’ because an ordinary mind can not understand their complexity.

If there is one certainty in the life of suffering beings, it is that nothing but the soul is eternal, and everything else can change and transform. The concept of change helps Buddhists lead an unattached lifestyle, unattached to things, emotions or people. 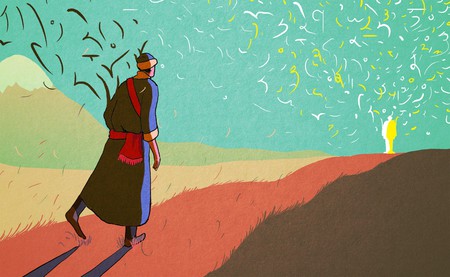 This is one of the fundamental concepts in Tibetan Buddhism: compassion toward all living beings, including animals and the plant kingdom. The first part of the word, ཐུགས་ (thug), refers to either the heart or mind (depending on context), which shows that these two parts of the human being are closely related to each other in Buddhist ideology.

Diligent practice of the Buddhist principles, as well as devotion and commitment to leading a righteous lifestyle, as laid out in the precepts of the Noble Eightfold Path, will eventually lead to a favourable rebirth into the next life. The path is not easy and most living beings will not be able to achieve it in one lifetime. Yet they should practice with diligence for the benefit of their next rebirth.

Buddhists believe that our body is on loan to us and only the soul is immortal. Thus, in comparison to the many reincarnations to come, our current life is evanescent. The idea that our life is only a moment, compared to the length of all time, speaks to the strong Buddhist detachment to material goods.

A stupa is a Buddhist shrine and place of worship that often houses religious relics. Stupas can be all shapes and sizes and play an important role in the lives of Buddhists. They can be used as a place for meditation or as a place for prayer. The shape of a stupa represents the Buddha sitting in meditation. 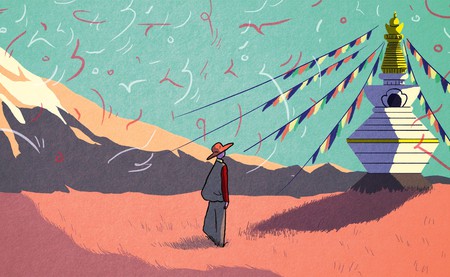 Literally translated as ‘the victory of the I’, this word is linked to our sense of pride, arrogance or conceit. In Buddhism, pride is classified as one of the five poisons that prevent a person from reaching enlightenment. The other four are desire, anger, ignorance and jealousy.

‘A confused and cloudy mind is unable to clearly see good deeds. It remains stuck in the circle of reincarnations until it can achieve release in enlightenment’. This is a direct translation of the Sanskrit term klesha, essential to the Buddhist teaching, which unites all emotions that cloud the mind and result in unwholesome actions.

Literally translated as a ‘victorious lake’, this compound word means ocean or sea. It does not only refer to a body of water, but describes the extent of one’s wisdom as well. It is a very common name in the Tibetan language. For example, each Dalai Lama, except for the first one, had this word as part of his name. 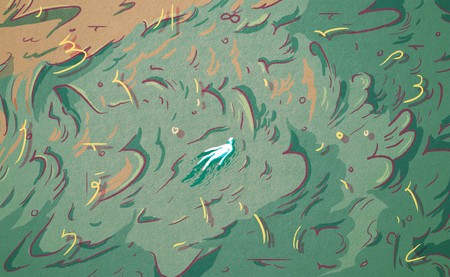 Buddhists denounce the necessity of money and see no relevance in material possessions, but they place a high value on knowledge and kind deeds. This word gives an example of how words are formed in Tibetan. རིན་ཐང་ (rin-thang) on its own means ‘price’, and when ཆེན་པོ་ (chen-po), meaning ‘big’, is added, the word ‘valuable’ or ‘precious’ is created.

This is one of the most commonly used Tibetan words, as it is part of the name of the spiritual leader of Tibetan Buddhism, the Dalai Lama. The lama teacher plays an essential role in the life of any Buddhist monk. Without the guidance of the lama teacher, achieving enlightenment is impossible and often dangerous. It is often a term of respect used when speaking to a monk.