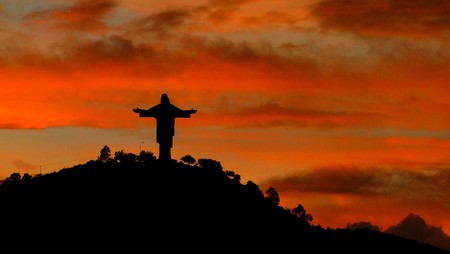 Throughout history, people of all religions have built monuments, shrines and statues to depict their deities. Sacred places for prayer, some religious monuments stand out as mind-blowing due to their colossal size and amount of sacrifice needed to construct them. From the tallest religious statue in the world depicting a 128-meter Buddha to the oldest one carved out of stone more than 1,000 years ago, these are 11 massive tributes to religious deities that will leave you speechless.

Located in eastern China, in the province of Henan, the Spring Temple Buddha is the tallest statue in the world, measuring a whopping 128 meters. Taking into account the 25-meter lotus-shaped pedestal, the statue’s magnitude is even more impressive. It took 11 years to build, from 1997 to 2008, and it’s made up of about 1,100 pieces of copper. A Buddhist monastery is located beneath it. The name comes from a nearby hot spring, which is said to have curative properties. 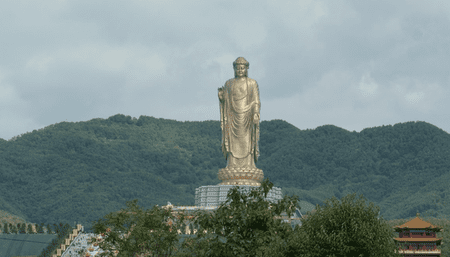 A Bolivian version of the more popular Christ the Redeemer in Rio de Janeiro, Brazil, the white concrete statue of Christ of Peace is located in Cochabamba, in central Bolivia. It was modeled after the Brazilian original and is taller, standing at a bit more than 40 meters. Christ’s arms are wide open with one hand pointing to the south and the other to the north. On Sundays, the visitors can climb the 1,399 stairs to reach the statue’s arms, for a panoramic viewing of the area. 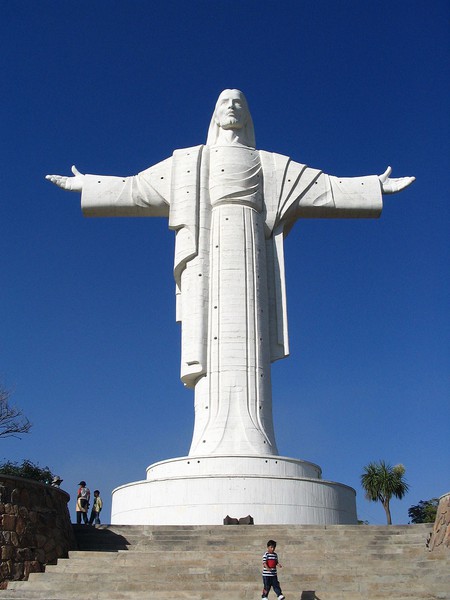 The second tallest statue depicting Lord Shiva in the world, it’s located in the town of Murudeshwar, on the western coast of India. At 37 meters in height, the statue is part of a temple complex, and it was built in two years by an Indian philanthropist. The whole complex is set on a peninsula, surrounded by the Arabian sea. The statue originally had four arms, and was painted in gold to appear sparkling in the sun, but the rough climate in the area blew off one arm and washed off the paint. 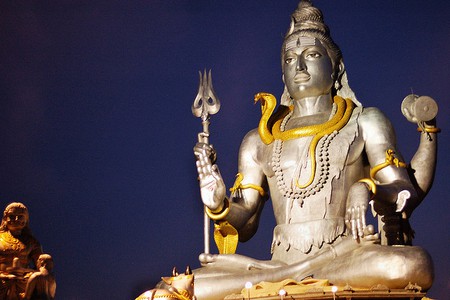 The statue is set in a cultural park dedicated to the Hindu God, Vishnu, on the southern tip of the island of Bali, in Indonesia. The park, called Garuda Wisnu Kencana, also hosts a statue of the mythical bird Garuda, which is said to be Vishnu’s companion. The Vishnu statue measures 23 meters, but it was originally planned to be a gold-plated 120-meter icon, sitting on an 11-story complex, which would have become the tallest statue in the world. 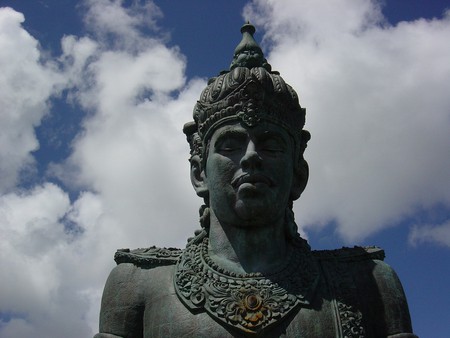 The tallest pre-modern statue in the world and the largest stone Buddha icon, the statue sits at the confluence of three rivers in the city of Leshan, in China’s central province, Sichuan. Started in the year 713, it took almost a hundred years to build, and since 1996, it has been listed as a UNESCO World Heritage Site. The Leshan Giant Buddha measures 71 meters, and it’s carved out of a red giant stone cliff. A local saying depicts perfectly the statue created in this natural environment, ‘The mountain is a Buddha and the Buddha is a mountain’. 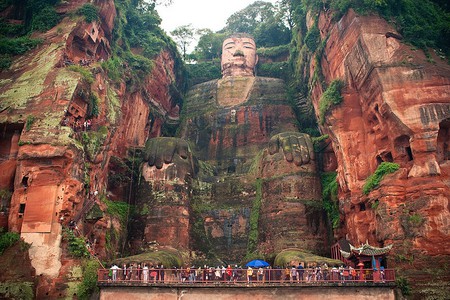 One of the newest massive religious monuments, the Christ the King statue in western Poland was completed in 2010 and it became the tallest statue of Jesus in the world. Made up of concrete and fiberglass in an Art Deco style, it is 33 meters tall with a 3-meter crown, and together with its mound and pedestal, the Christian statue surpasses 52 meters. The 33-meter height of Jesus symbolizes the traditional belief that he died when he was 33 years old. 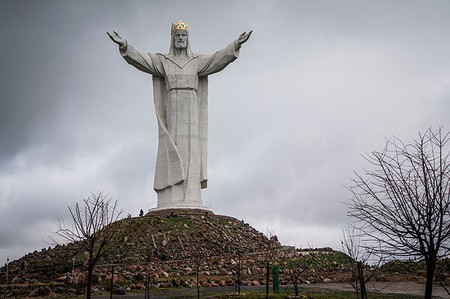 A copy of another Shiva statue from Gujarat in India, the Mangal Mahadev statue is located in the southern part of the island of Mauritius. At 33 meters high, it’s the third-tallest Shiva statue, and it is set near the Ganga lake, where other temples and statues dedicated to other Gods are located as well. Inaugurated in 2007, the tallest statue on the island of Mauritius is visited every year by many pilgrims who walk barefoot to it in order to pray at Shiva’s feet. 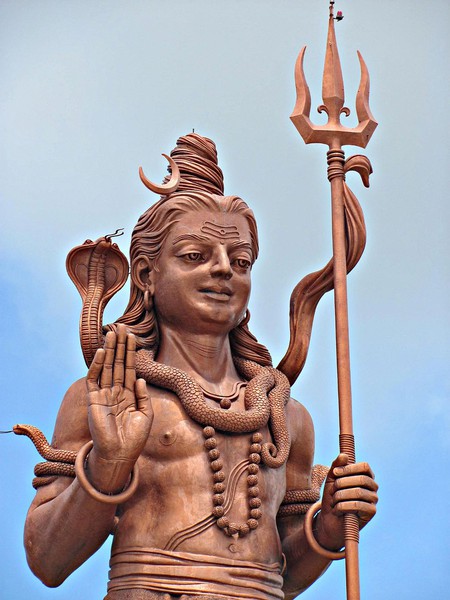 The most famous statue on Earth depicting Jesus is actually only the third tallest, at 38 meters high, as other similar statues built to resemble Christ the Redeemer surpassed it in size. Located in Rio de Janeiro, on the peak of the 700-meter Corcovado hill, it overlooks the city of Rio, and it’s been a symbol of Christianity around the world ever since 1931 when it was finished. Other design propositions for it included Christ holding a globe in his hands, but the one with open arms was finally chosen as it symbolizes peace. 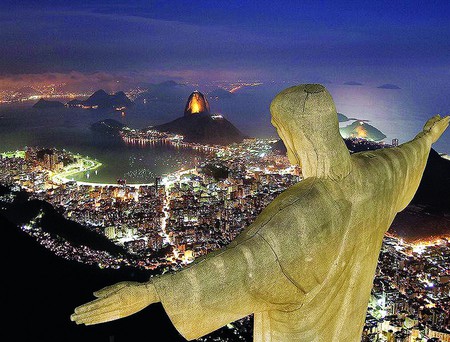 Another statue of Buddha, this one located in central Myanmar near the city of Monywa, is the second-tallest statue in the world, after the Spring Temple Buddha in China. The Laykyun Sekkya Buddha was completed in 2008 and measures 116 meters, standing on a 13-meter throne. It’s painted in bright gold, and on the inside, it’s made up of 32 stories. It is surrounded by other statues representing Buddha, including an 89-meter reclining Buddha that lies in front of Laykyun Setkyar and another one nearby, measuring 18 meters tall. 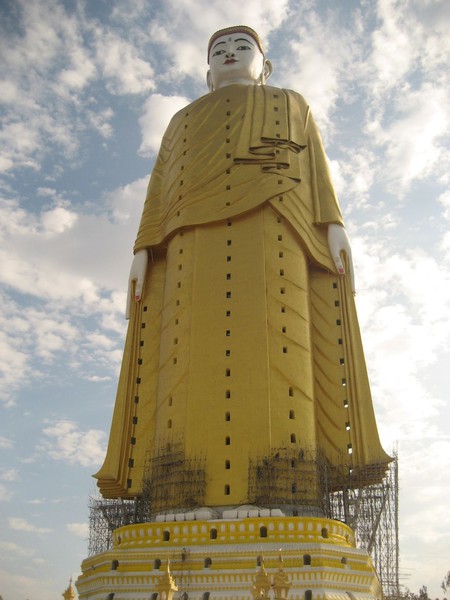 The fourth-tallest statue in the world, Guan Yin, is a depiction of the Buddhist deity of mercy, and it stands at 108 meters tall. Located on the Chinese island province of Hainan, the statue has three facets: one looking inland towards China and the other two toward the sea. Each of the facets has different postures, but they all represent blessing and protection for China and the whole world. The statue was completed in 2005 after six years of building work done by more than 100 Buddhist monks from several countries, including Taiwan and Macao. 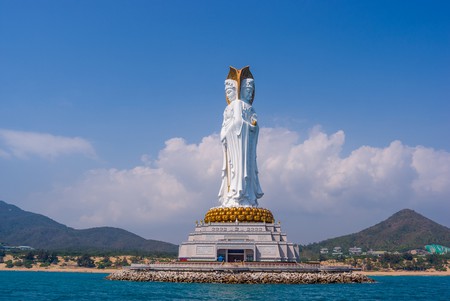 The 33-meter statue resides inside the Reclining Buddha Temple, also known as the Sleeping Buddha Temple, in the state of Penang in Malaysia. The colorful icon is plated with gold and represents the death of Buddha, a symbol of a complete peace and detachment from the world. In front of it are several shrines of other Buddhas and Thai deities. The Thai Buddhist temple was built in 1845 on a piece of land given by Queen Victoria to stimulate trading with Thailand. 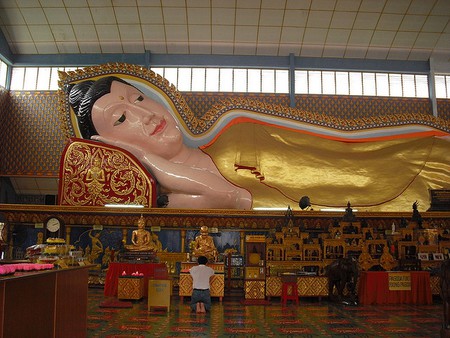