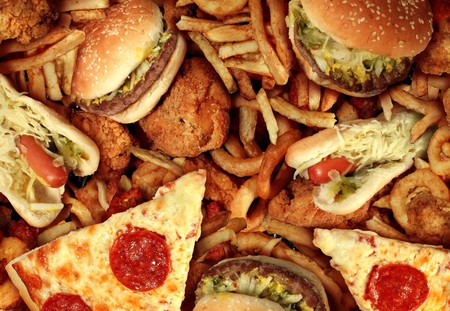 To celebrate (or regret?) National Fast Food day on November 16, we’ve compiled a list of the quirkiest, most unlikely fast food items from around the world. Which one would you like to try?

Pizza time. All the time. #burritopizza

A pizza with chilli beans, burrito sauce and other assorted toppings. Also in the range was a nacho pizza and a quesadilla pizza. Available from New Zealand.

The ‘Berry Kristmush’ burger was limited-edition for Christmas 2014, and featured berries with a red wine sauce. Because nothing screams ‘festive’ like beef and blueberries. From Japan.

The burger was created in the signature colour of the famous Parisian shop Colette – an unappetising shade of bright blue.

A restaurant in Japan noticed that women weren’t buying many burgers because small mouths are considered beautiful in Japan and eating a burger in public contradicts that. They created a burger wrapper with a woman’s face printed on it so no-one could see the women’s eating, and their female burgers sales increased 213% in a year.

Not Disney related at all but, guys. I'm having a KitKat sandwich and it's magnificent. #japan pic.twitter.com/Y1ExrYzBOS

A KitKat, whipped cream and candied orange peel in a bun, which hails from Japan.

Available from Dunkin’ Donuts in Japan, these flavourings are common on bread, less so on doughnuts.

Uhhhhhh!!! I am so excited to try this! @hayleyrachel20 you shouldn't have showed me this haha #cheeseburgerpizzacrust #burger #fastfood #pizza #pizzahut

You can eat this fast food Frankenstein’s monster at Pizza Huts in the Middle East and the UK. It’s as it sounds: a pizza with mini cheeseburgers embedded in the crust.

KFC made edible nail polish that tastes like their chicken. You can choose from original and hot and spicy flavour, and then lick it off your nails.

Buffalo Crunch doughnut from @TimHortons at the #NYSFair. This should be featured on @BizarreFoods ASAP. pic.twitter.com/ngcJCTe0j7

A doughnut dunked in buffalo sauce and encrusted with crushed crisps, with two tiny tortilla chips for dipping. Yum?

Beer and macarons at McDonalds in France

That’s right: at the golden arches in France, you can buy a beer to go with the delicate macarons that they sell there.