Whether at home or abroad, Tibetan contemporary artists explore their multicultural influences, examining the tensions between traditional Tibetan and contemporary global culture. We profile the new generation from Tibet’s art scene.

San Francisco-based Tserin Sherpa (b. 1968, Kathmandu) masters the tradition of Tibetan thangka painting, trained from a young age by his father, Master Urgen Dorje, a renowned thangka artist from Ngyalam. His work is concerned with contemporary issues of the Tibetan diasporic experience, such as displacement and the loss of cultural heritage. Sherpa paints demons, spirits, and deities from Tibetan tradition that function as an exploration of the detachment and estrangement of the Tibetan diaspora towards their homeland. In his first solo exhibition in 2012 Tibetan Spirit, Sherpa interrogated “the way we understand objects today as works of art or for devotion.” His work draws from the same principles illustrated by Andy Warhol or Marcel Duchamp; essentially, he questions our changing perceptions of objects and ideas. 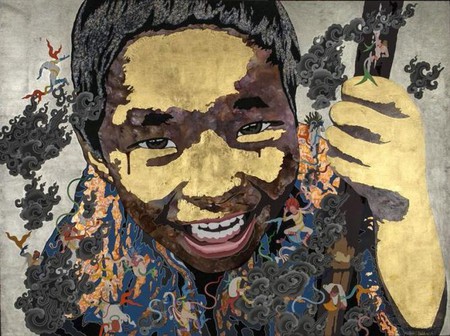 Lhasa-based Tsering Nyandak (b. 1974, Lhasa) studied under Tsewang Tashi upon his return to Tibet from India in 1999. Nyandak experimented with western and Tibetan painting techniques and styles before elaborating his unique form of expression by bridging the two. For the artist, creativity first comes from the exploration of his own identity and understandings of the ‘self.’ His oeuvre extends from the personal into the social sphere, by examining his personal reflections on life and observing social phenomena in the changing Tibetan landscape. Nyandak’s works reveal subtle influences from traditional Tibetan culture, such as the use of the Buddha head as vessel of information: “I use the Buddha not because of my religious inclination but as a physical object that relates to me and my surroundings. It’s objectiﬁed, but also works as a container.”

Lhasa-based Nortse (b. Tsering Norbu, 1963, Lhasa) is a versatile mixed media artist who consistently embraces new styles and forms. Nortse reinterprets traditional Tibetan motifs to confront the erosion of local culture. His work ranges from personal issues to environmental degradation, overpopulation, alcoholism, and mass media. “Duplicating myself is a very painful experience,” said Nortse about his Nortse self portraits – the state of imbalance (2008). Changing media and style is part of the process of exploration of self and his Tibetan heritage, whilst it allows Nortse to shift to an examination of global issues from an objective perspective. Bandaged Landscape exemplified the latter approach: “My main subject this time includes the concern over losing one’s traditional culture, the change of faith, and environmental issues.”

Lhasa-based Dedron (b. 1976, Lhasa) is deeply influenced by traditional Tibetan art, incorporating traditional techniques into aesthetics reminiscent of Modernism, Cubism, and Surrealism. Dedron comments on the changing Tibetan socio-cultural and environmental landscape from both modernization and globalization. A devoted Buddhist, Dedron says, “…My hometown is my rock. No place compares. My art is rooted here. My life is rooted here. If I leave this place, I will lose all meaning.” Dedron depicts beautiful Tibetan landscapes and urban scenes that include traditional motifs alongside contemporary elements, such as in We are nearest to the sun (2009). Dedron has also painted Tibetan-style portraits of women and western icons such as Mona Lisa and Marilyn Monroe (2009).

London-based Gonkar Gyatso (b. 1961, Lhasa) creates humorous works informed by both politics and his personal life. “Just as the identity of my homeland cannot be separated from religion and politics, so my own sensibility has been shaped by the undeniable bond between the two.” Gyatso’s practice revolves around the reproduction of Buddhist iconography, calling the Buddha his ‘muse.’ Skillfully incorporating Western and Tibetan cultural themes into his work, Gyatso transforms traditional images of the Buddha into Pop Art-inspired multimedia works that satirize world politics and the mundanity of life. His iconic work titled Pokemon Buddha (2003) marks the first example of what has now become the central theme of his practice; much of his work references the shifts in identity that characterize the life of a migrant. 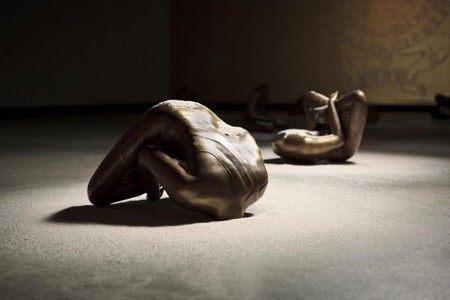 New York-based Tenzing Rigdol (b. 1982, Kathmandu) works in mixed media, from painting to collage, sculpture, photography, video, and installation art. Educated in the United States, Rigdol’s paintings onboard traditional influences, inspired by human conflicts and politics. His work engages with issues that pertain his Tibetan heritage and the socio-political issues surrounding the Tibetan diaspora. In 2011, he created Our Land, Our Soil, a site-specific installation in Dharamsala that garnered worldwide media coverage. Rigdol transported 20,000 tons of Tibetan soil to the Indian city to allow displaced local Tibetans to walk on their own soil once again. After the exhibition, he invited people to bring a bag of soil home with them. His 2013 work Pin Drop Silence: Eleven-Headed Avalokitesvara was the first contemporary Tibetan artwork to be collected by the Metropolitan Museum of Art in New York. 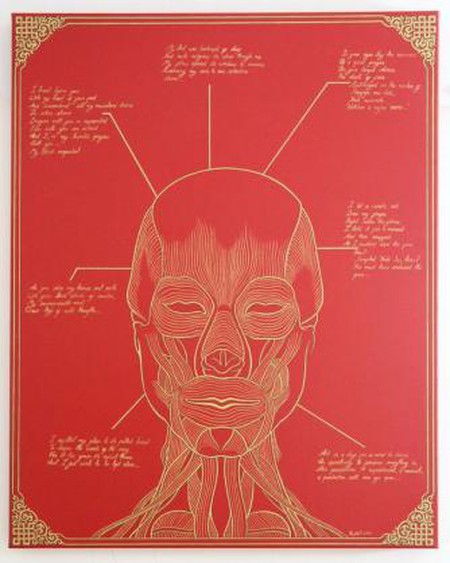 Tibet-based Gade (b. 1971, Lhasa) underwent an education which included the study of Chinese painting as well as traditional Tibetan art. Gade’s practice is influenced by Tibetan traditional culture and his upbringing in an increasingly Western society. His paintings and sculptures juxtapose traditional techniques and symbols with western pop culture imagery, from Ronald McDonald to Mickey Mouse, the Hulk, and Spiderman. Gade’s works are often humorous commentaries on the effects of modernization on traditional Tibetan culture, religion and society. 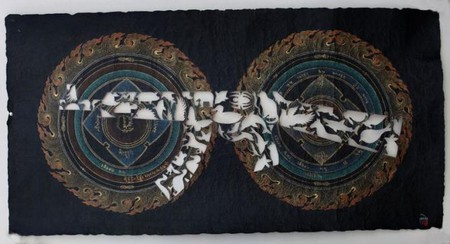 Formally trained in China and Norway, Lhasa-based Benchung (b. 1971, Lhasa) explores the tensions surrounding the effect of external cultures and modern technologies on traditional Tibetan culture. Benchung examines the concept of a cultural network, looking at the ways in which people from wildly different places come into contact with one another. His practice incorporates traditional imagery into Western contemporary art techniques through paintings, sculptures, video and installation art. The theme of transformation is present in much of Benchung’s work and is recognizable in his paintings. In the works from his first solo exhibition in 2009, Colourful Darkness, Benchung weaves narratives that feature absurd juxtapositions where logic is contorted, such as sunflowers, guns and western-suited headless men. 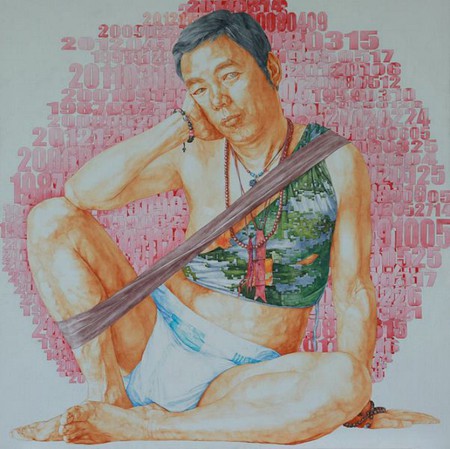 Switzerland-based Kesang Lamdark (b. 1963, Dharamsala) creates plastic thangkas, sculptural installations, and lightboxes. His multicultural upbringing is evident in his work, which balances Eastern and Western elements. Lamdark favors the use of contemporary media over traditional forms, and much of his work includes the use of recycled materials and found objects. As expressed in his 2008 solo exhibition titled Plastic Karma, plastic PVC is melted over thangka paintings. Peep Show exemplified his use of found objects, with beer and soda cans pierced at the bottom to reveal scenes and pop icons when viewed through the hole against a luminous background. Lamdark uses his unique pointillist style for his lightboxes, piercing aluminum sheets with nails to compose detailed portraits and scenes. Dorge Drakken and Kiss is a good example of the Eastern/Western convergence, in which a rock band icon is paired with a Tibetan oracle. 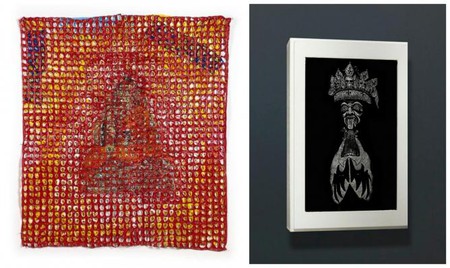 Lhasa-based Tsewang Tashi (b. 1963, Lhasa) is currently as Associate Professor of the Arts Department at Tibet University. His practice includes photography, digital manipulation and painting to create true-to-life portraits of Tibetan people. Tashi says: “What I pay attention to is to the real people and environment as my source of inspiration. I believe that if contemporary life around us is ignored, real contemporary art cannot be created.” The artist aims at presenting a Tibet that does not correspond to the myth of Shangri-La or the vision of an exotic or ‘savage’ culture. Tashi believes in the representation of reality and as an artist he is committed “to speak as humankind in general.” 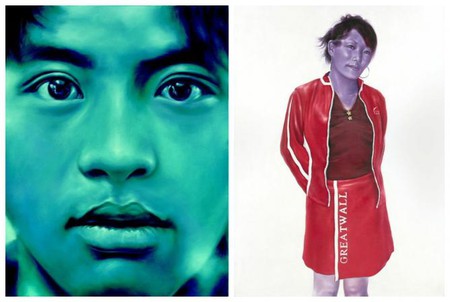