Meet The Skate Girls of Kabul In Photographs of Afghanistan's 'Skateistan'

Founded by Australian skateboarder Oliver Percovich, the grassroots initiative ‘Skateistan’ aims to connect youth and education in Afghanistan through skateboarding. 45 percent of the students are female, an unlikely achievement in a country where women are forbidden to even ride bicycles. This project caught the attention of photographer Jessica Fulford-Dobson and inspired her stunning project, ‘Skate Girls of Kabul.’ 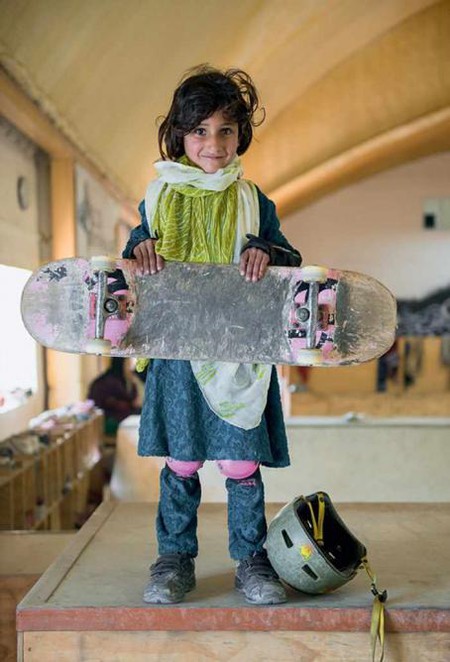 Skateistan is the innovative NGO in Kabul founded to empower Afghan children (especially young girls), teaching them how to skateboard as a gateway to their further involvement in education. Founded in 2007 by Australian skateboarder Oliver Percovich, the project aims to educate and engage youth in Middle Eastern and African countries.

In October 2009 Skateistan completed construction of an all-inclusive skatepark and educational facility on 5,428 square meters of land donated by the Afghan National Olympic Committee. The project teaches children from all socio-economic backgrounds to skateboard, from children displaced in camps or working on the street to those considered ‘middle class.’ This ensures that children from different areas and backgrounds are able to interact and bond. Percovich says, “Kids in Afghanistan who would normally have nothing to do with each other because of tribal differences are playing together in the skate park and working together in the classroom.” He says “They are transcending deep cultural barriers and now have a shared identity that creates a unique community and hope, in a place where it’s sometimes impossible to hope.” 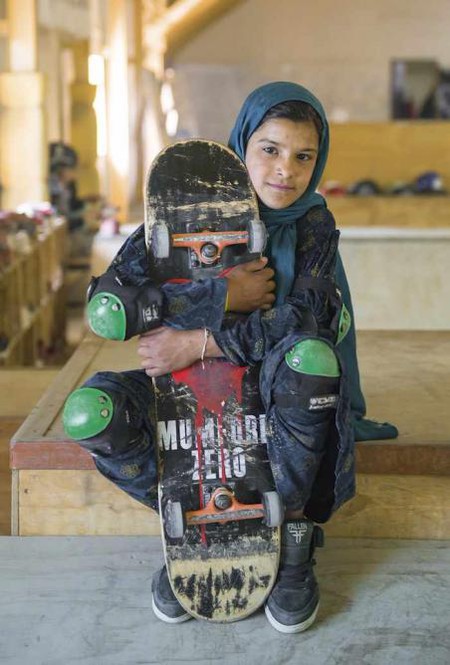 The project’s priority is to get girls from poor and displaced families back into full-time education by empowering them through the art, and the fun, of the skateboard. Percovich says, “Coming to Skateistan might be the only chance for some of our students to do a sport, do creative arts, or have a positive education experience.” He continues, “They also get to have lots of fun and make friends as part of a youth community built through a shared love of skateboarding.” Over 50 percent of the students here are street-working children, and over 40 percent of them are girls, a rarity in a country where, until recently, women were banned from participating in sport. The organization also places a focus on education. Only 13 percent of young women in Afghanistan are literate, and only around three percent receive any education at all.

In many Afghan communities it’s customary to forbid women from riding bicycles. Skateboarding has become an empowering activity that gives these girls a source of physical exercise and some fun. Skateistan has worked hard to get women educated, as a lot of people in Afghanistan don’t believe that females should be educated at all. Girls that work with Skateistan are excited to be involved and have the opportunity to do something different. Oliver Percovich hopes that through seeing the brave females involved in running the programs, and the enthusiasm female students have, other girls are inspired to be brave and fight for their education. 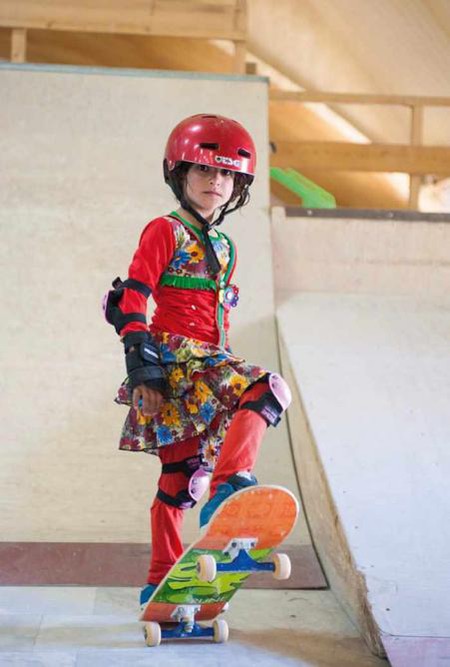 When he visited Afghanistan, Oliver Percovich was shocked that girls didn’t ride bicycles because it was deemed culturally inappropriate. Girls aren’t allowed to play soccer or volleyball, fly kites, or participate in Buzkashi (the country’s national sport) because they are all considered activities for boys. He saw first-hand the lack of educational, recreational, and work opportunities afforded to local women and girls. However, Percovich found a loophole, because skateboarding was brand new to the country, nobody had had a chance to say that girls couldn’t do it; it wasn’t seen as a sport solely for males because nobody really knew about it. Afghanistan is a country that is often identified as one of the most dangerous in the world for women, so he was excited to be able to offer girls a safe and fun outlet to connect females with an education and means of exercise. Percovich realized that he may have found a way to use his passion for skateboarding to help others.

Percovich has faced a number of drawbacks during the project. Throughout 2012 and 2013, Kabul saw a rise in violent activity and suicide attacks. On September 8, 2012, four members of Skateistan were killed in a suicide bombing at a NATO facility in Kabul. Although it considerably rattled the local community, the organization’s internal commitment and international support continued to flourish; such tragedies haven’t stopped these children from enjoying the playtime that they deserve. 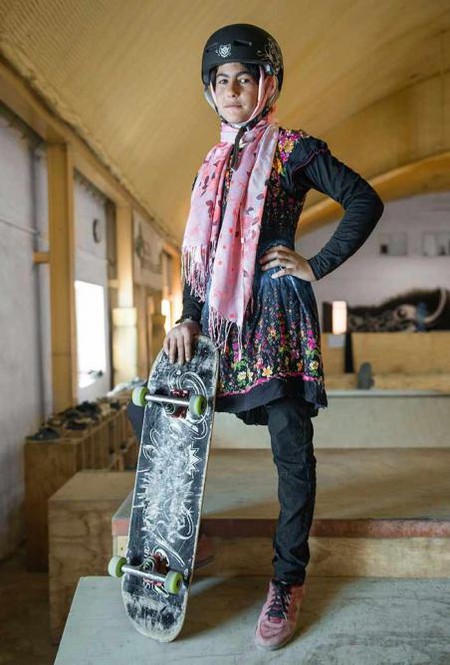 It’s important that the activity is deemed culturally appropriate and ensures the participants receive a proper education and a safe place to play. Boys’ and girls’ classes happen on different days of the week, and the girls’ classes are only taught by female teachers. Safe transport is provided to and from the Skateistan facilities. Percovich and his team have shared skateboarding in its purest form and let the kids make their own culture around it. They purposefully didn’t show participants anything to do with skateboarding culture around the world as introducing a different culture or tradition wouldn’t be considered appropriate. They would have received serious backlash from the parents and the communities that the children come from if they started wearing clothes and listening to music that was considered ‘Western.’ Skateboarding is now considered the largest female sporting activity in the country.

UK-based photographer Jessica Fulford-Dobson created a photo series portraying the girls learning to skateboard at the NGO’s branch in Kabul. Her project ‘Skate Girls of Kabul,’ represents new freedoms in Afghanistan. Soon after entering the Afghan community, Fulford-Dobson was accepted by the young girls, and she was able to photograph them with natural light, helping to expose their personalities through simple portraits. In the images you can see the girls’ confidence, which is captured in posed compositions and candid photos of the girls skating through the indoor facility. Fulford-Dobson says, “I met so many impressive women and girls in Afghanistan: a teacher as tough and determined as any man, young Afghans in their early twenties who were volunteering at an orphanage and were passionate about being seen as strong and willing to fight for themselves, rather than as victims of circumstance, and girls who were being educated to be leaders in their communities and who were already thinking carefully about their own and their country’s future.” She won second prize in the 2014 ‘Taylor Wessing Photographic Portrait Prize’ with her image ‘Skate Girl,’ and her work has recently been on display in the Saatchi Gallery in London. 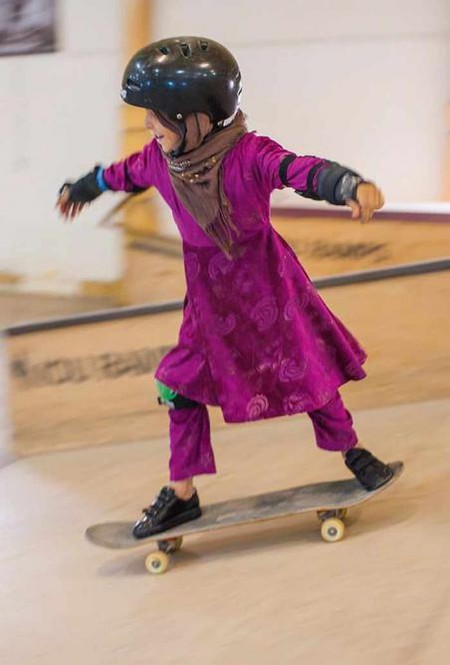 Skateistan has changed the lives of the children in Afghanistan, which was named by Unicef as the worst country in the world to be born and has been embroiled in conflict for more than 30 years. The young Afghan people want to make their country a better place, and Skateistan tries to create a situation where they can stand up and tackle problems in their society. The project has helped turn individual lives around. Hanifa, 16, was selling tea on the streets and in the parks of ravaged Kabul when she first visited one of the charity’s skateparks in 2010. Now, she’s one of Afghanistan’s most talented skaters and has become an inspiring teacher and role model for other young girls, having joined Skateistan’s staff as an instructor. She says, “I think by becoming a good skater, I’ll create a better future for myself.” 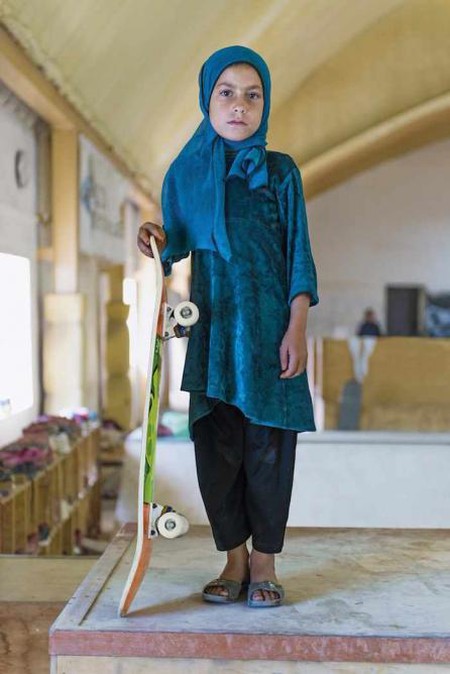 Skate Girls of Kabul | © Jessica Fulford-Dobson
Give us feedback