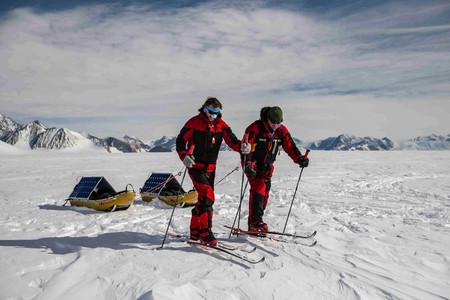 Explorer Robert Swan OBE has endured some of the harshest environments on the planet. His greatest feats include being the first man in history to walk unaided to both poles in the 1980s, and completing a 600-mile, 60-day trek on foot to the Geographic South Pole; he accomplished the latter alongside his son Barney.

During their expedition to the South Pole, the Robert and Barney Swan were powered solely by renewables from some of the world’s most technologically advanced companies like NASA, Shell and Patagonia. While NASA provided a state-of-the-art solar-powered ice melter, Patagonia supplied technical clothing for extreme conditions and Shell delivered advanced biofuels.

By using only these sources of energy, Robert and Barney were able to cook and keep warm in temperatures as low as minus 40C (-40F) as they trekked through some of the most inhospitable terrain on Earth. “We planned for every scenario, but our main contingency for when we’re in an Antarctic blizzard and I can’t see my hand in front of me is the advanced biofuels, which keep us warm, comfortable and most importantly, safe,” said Robert.

Through this extraordinary expedition, the father and son duo highlighted the pressing issue of climate change, and that the development of cleaner energy solutions requires joint effort. It is up to all players in society to club together, including governments, industry, entrepreneurs and corporations.

Speaking of the enormity of climate change, Barney explained: “The expedition was about the convenient solutions that can address the current climate change challenges. It is a small example of how we can all make choices to help us transition to a cleaner energy future. For people at home who are wondering what they can do, just making small changes like eating from sustainable sources, using less plastic cups and bags and using solar-powered appliances to charge your phone.”

As a life-long explorer, Robert also shares this passion about environmentalism. When asked what’s left to explore, he added that “the greatest exploration left is our ability as humans to learn how to live on the earth sustainably”.

Trace the Swans’ incredible journey through this immersive, interactive web map. It’s one of very few Antarctica tracking maps that uses satellite imagery. Plus, it’s geographically accurate, in real-time, and in ultra high-resolution.