Recent events in world news have led us into important conversations on the human right to freedom of expression. Freedom of expression has numerous and diverse frontiers with restrictions that vary from country to country. Music is often used as a vehicle for carrying sociopolitical messages. Songs can portray a universal theme, promoting acceptance, liberty and virtue. We check out five things about the Zimbabwean musical storyteller Oliver Mtukudzi, who is healing the common spirit. 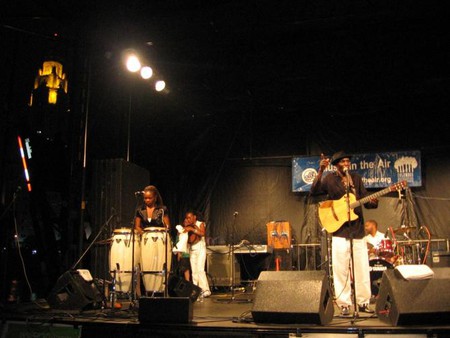 Oliver Mtukudzi and his band perform at Genoa Park in Columbus, Ohio on August 1, 2008 | © Knase/Wikicommons

In Zimbabwe, a storyteller was needed, someone with the ability to make deep connections, weaving lyrical and musical magic to echo and heal the common spirit—especially in surroundings where directly confrontational lyrics are not acceptable. Oliver ‘Tuku’ Mtukudzi is that inspired storyteller for Zimbabwe. He has a long and rich history of reflecting hopes, dreams, sorrows, and concerns through his music. The 62-year-old legend has become an influential and internationally celebrated artist, both by the Zimbabwe people and beyond.

Oliver Mtukudzi’s success does not solely lie in his storied music, but also in his dedication to his role as a messenger, inspiring and giving hope to thousands of people around the world. Although Mtukudzi’s music is largely known for his sociopolitical messages, he will tell you that he does not see it as criticism but rather acting as a narrator or messenger for describing what he experiences and sees around him.

Stories That Heal The Heart

(Who is going to comfort another?

Who is going to pass condolences?)

Making Mtukudzi stand out from other great artists is his undeniably authentic and honest approach to his music, deliberating relevant global subjects such as AIDS, poverty and women’s rights.

Many of his songs are inspired by losses in his own life. The album ‘Sarawoga’ (2013) (Being left alone) was written as a dedication to his son, Sam Mtukudzi, who was killed in a 2010 car accident, as the two had planned to collaborate on many. After the incident, Mtukudzi saw the process of recording the album as his own soul therapy and, instead of taking a break from music, he put on even more shows than he had initially planned.

One of his most popular songs ‘Wasakara (You Are Getting Old)’, has become the unofficial anthem of the opposition criticizing Mugabe (the president of Zimbabwe). By using the universal theme of aging and impaired usefulness, he has offered the Zimbabwean people a voice for registering dissent, in safety.

What is Tuku Music?

His unprecedented, experimental South African sound has earned Mtukudzi his own style of music, called ‘Tuku’. When asked about the origins of Tuku music in various interviews, he claims that he never came up with the Tuku label himself and instead gives the credit to his fans. His followers likely heard and identified several familiar Zimbabwean music styles in his songs, along with some unique qualities and that became his signature style.

The traditional sound of Mtukudzi’s music features his own smooth vocals. Instruments like mbira (thumb piano) and marimba are mixed with his trademark acoustic guitar, making his sound markedly unique. Additionally, Mtukudzi doesn’t only use his guitar in traditional means, but also masters it as a rhythmic percussion instrument.

(The tears have dried up there is no-one crying anymore.

It is only painful in the heart, quietly.)

In 2011, Mtukudzi became the first Zimbabwean personality to work with UNICEF, earning him the title of UNICEF Regional Goodwill Ambassador for Eastern and Southern Africa. ‘Our Regional Goodwill Ambassadors are chosen not only because of their name recognition but more particularly because of the respect with which they are held and their appeal as genuine humanitarians,’ (Mr. As Sy, UNICEF).

Mtukudzi was chosen purposefully to take on the responsibility of becoming the inspiration for young people, particularly in speaking about the prevention of HIV. The singer’s own life had been devastated by the AIDS virus. He had undergone many defeats losing his brother, as well as four of his previous band members in the 1980s. As a messenger of hope, after experiencing the damage and agony it can bring, he sees it as his mission to inform and fight the stigma.

(Your face is wrinkled, your heart still feels young.

Be respectful of getting old, it is god’s wish that you age)

Since the very beginning of his career, when Mtukudzi made his first recordings in the 1970s with the band Wagon Wheels, he hasn’t stopped sharing his music with the world. He has released over 60 albums to-date. Worldwide, commercial success happened with his album ‘Tuku Music’ (1999), followed by ‘Paivepo’ (1999) that climbed to first place on the Zimbabwean music charts.

One could easily assume that discussing and being closely related to such critical social and personal issues would bring an air of melancholy to his songs, but that is not Mtukudzi’s intention. Instead, he tells us: ‘the idea of music is not really coming up with a sad song. We talk about sadness, but we don’t mean it. We write songs to uplift people.’