Interview with Raphael Chikukwa | The Fearless Promoter of Zimbabwean Art

In 2010, after ten years of independent curating, Raphael Chikukwa was appointed Chief Curator at the National Gallery of Zimbabwe. Since the 1960s, the nation has been beset by economic struggles, international sanctions, political instability and sporadic regional violence. Chikukwa has played a vital role in strengthening the country’s art scene through times of scarce funding and lingering negative perceptions from parts of the international arena.

Raphael Chikukwa has curated, organised and spoken at numerous galleries, projects and symposiums around the world, and talks to us today about Zimbabwe’s appearance at the Venice Biennale, the problems facing African galleries, the term ‘Shona’ as a colonial relic and the new artists we should be looking out for. 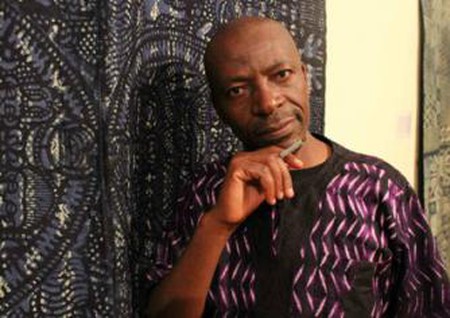 Raphael Chikukwa | Courtesy of the National Gallery of Zimbabwe

One of your personal research projects involved you travelling through Zambia, Tanzania and Zimbabwe in search of World War Two veterans. Many of these men had fought and suffered for Britain, but following the war, were left to return to their homelands with very little in the way of compensation or support. Could you tell us something about this project?

The project was entitled Afrikan Heroes and it was inspired by my visit to Manchester during the 2001 Commonwealth Games, where I curated an exhibition of Zimbabwean art. I visited the Imperial War Museum North where there was an exhibition celebrating the contribution of Commonwealth countries during the First and Second World Wars. I was shocked to see that the African contribution was not on show. As a son of one of the men who fought in World War II, I approached the curator of education, Rupert Gaze. I told Rupert how unhappy I was and in 2004 I curated an exhibition entitled ‘Visions of Zimbabwe’ at the Manchester City Art Gallery. Rupert and I continued our discussion. While in Manchester, I knocked again at the Imperial War Museum North and submitted a project document. They gave me funding for the research. Most importantly, it was my father’s stories that inspired it all. He used to tell us about his life in Burma and Japan during the Second World War, fighting for the Empire. 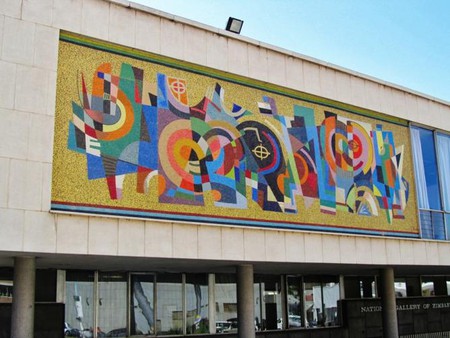 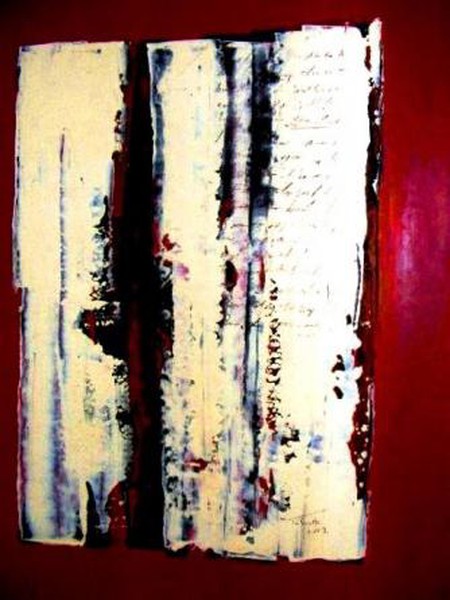 © Tafadzwa Gwetai, ‘Stillness of Heart’ | Courtesy of the National Gallery of Zimbabwe

Zimbabwe has clearly endured some turbulent periods over the past fifty years. Amidst these troubles, what have been the greatest obstacles facing the National Gallery and Zimbabwean public art?

Like many other museums and galleries in the African continent, funding is our biggest challenge. For many years before the economic challenges, the gallery used to get corporate funding. That funding is no longer available. I hope that our governments and corporations will realise the need to support the arts, especially museums and galleries, because the future of these institutions inherited from colonial governments depends on maintenance and support. Recently I presented a paper entitled: ‘What is the Future of Museums in Africa?’ This remains a million-dollar question today as we try to define who we are and contemplate the need for the cultural sector to educate our politicians. With existing infrastructures, we are better off maintaining them than building new ones because many museums in Africa are in the intensive care unit. The National Gallery of Zimbabwe are very lucky that, through our Norwegian Embassy’s funding, we managed to carry out major roof repairs. This project was worth more than half a million US dollars and we are very grateful for the support. 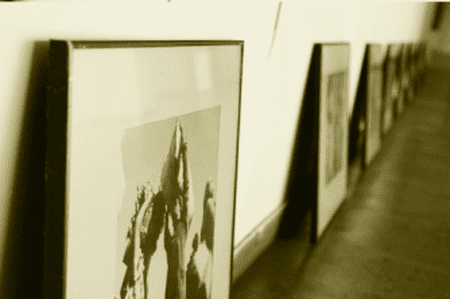 In 2011, your country made its first appearance at the prestigious 54th Venice Biennale. Before the event, for which you acted as head curator for the Zimbabwe Pavilion show, you said: ‘Zimbabwe has become a Zone of Silence with little access to the platforms of exchange through which it can communicate… a Zimbabwean pavilion at the Venice Biennale will break the silence.’ What benefits has the Zimbabwean art scene enjoyed following its initial exposure in Venice?

Zimbabwe is coming through a very difficult period and the need for image building was something we all knew was important for the country and for the art practice at large. This is not to say all doors were shut but there had been, for more than fifteen years, very few artists showing on international platforms due to the political and economic situation in the country.
Today we are celebrating the big re-entry of Zimbabwe into the international arena; our artists are shining at big exhibitions in a way reminiscent of the 1950s to 1980s period. We are no longer passengers in our own ship. The idea of telling our own story was very vivid in the Zimbabwe Pavilion from the start. This was a Zimbabwean initiative by Zimbabwean people. At the 55th Venice Biennale 2013, our pavilion sold many works by three emerging artists: Portia Zvavahera,Michele Mathisonand Virginia Chihota. Their works are now in the hands of international art collectors. The two women went on to win awards after their appearance at the 55th Venice Biennale. Portia Zvavahera recently won the Johannesburg Art Fair Award and is now represented by the Michael Stevenson Gallery in South Africa. Virginia Chihota is now represented by the Tiwani Gallery in the UK. These are artists who would not have gotten an opportunity to show on an international platform if the Venice Biennale had not afforded that opportunity. 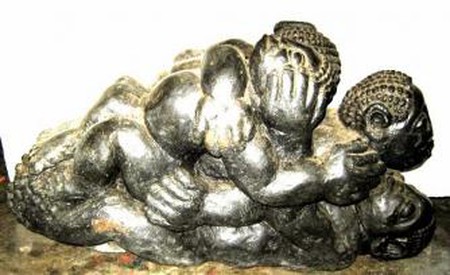 Zimbabwe’s exhibition at the 2011 Biennale was entitled ‘Seeing Ourselves’. Do you think Zimbabwean visual art, whilst you have been working in the sector, has concerned itself with trying to ‘see’, discover or maybe construct a sense of national identity or national character?

Zimbabwe has gone through many changes since the death of colonial art education; independence brought new images and new literature that had not been allowed in the country during the colonial era. New art schools have opened, many artists have become global citizens for they hop from one major city to another and that influences their art.
It would be naïve to think that there is a national identity in our art. The only national character is the Zimbabwe sculpture, or as Western scholars would want to call it, Shona Sculpture. The term Shona is a construct by Frank McEwen [British artist, teacher and museum administrator – helped with the completion of the Zimbabwe National Gallery in 1957]. There is no such thing as Shona in Zimbabwe, this is a colonial term putting people in one box. Some of these sculptors are of Malawian origin, Zambian origin, Angolan origin, Mozambique origin and some are even Ndebele; without being apologetic, calling them Shona Sculptors is an insult. Art is art; it does not matter where it comes from, it’s a medium of expression.
One of Zimbabwe’s veteran artists Tapfuma Gutsa once said, “I would not like my art to be taken as Shona property. It’s not. First, it belongs to the Africans. But beyond that it’s international – the kind of symbols I use talk about basic human emotions, basic relationships, universal love and understanding.” 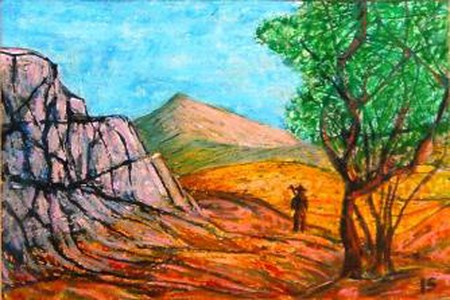 At the Tate Britain’s 2010 ‘Curating in Africa Symposium’, you spoke of the need for Zimbabwe’s National Gallery to reach out to local communities as well as international partners. During your tenure as Chief Curator, how successful has the gallery been in connecting with the Zimbabwean public? Do you think public attitudes to art have changed in Zimbabwe over the last thirty years?

Our gallery has been successful in engaging with international partners. This can be seen through the projects we have been doing – the first and second Zimbabwe Pavilion, the major renovation of the gallery, the current Basket Case II project on which we are collaborating with the EUNIC Cluster in Zimbabwe and co-curating with Christine Eyene – to mention but a few. With the local community we still have a lot to do, but we are hopeful. The new initiative by the government to make sure that Zimbabwean art should dress all Zimbabwean government buildings and offices will encourage art appreciation by our people and we remain hopeful. 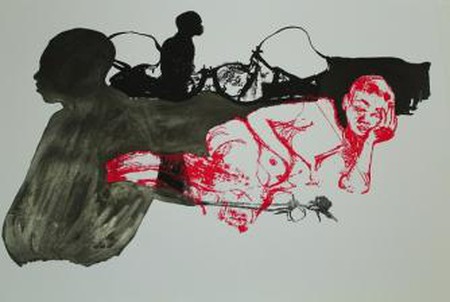 © Virginia Chihota, ‘In your darkness I have found light’, 2012 | Courtesy of the National Gallery of Zimbabwe

Finally, our readers are always looking for new talents to discover. Could you give us the names of some up-and-coming artists working in Zimbabwe right now that you find especially exciting?

Some of the names that come to mind are: Tafadzwa Gwetai, Masimba Hwati, Richard Mudariki, Admire Kamudzengerere, Gareth Nyandoro, Dana Whabira, Moffart Takadiwa, Isrieal Isrieal, Dan Halter, Gerald Machona, and Kudzai Chiurai who was based in South Africa for many years. Kudzai came back to Zimbabwe a year ago and it’s always great to have artists back in the country. I am hoping more artists who are working and practising outside Zimbabwe will come back but, by working outside Zimbabwe, they continue to fly the Zimbabwean flag.
By Rob Yates