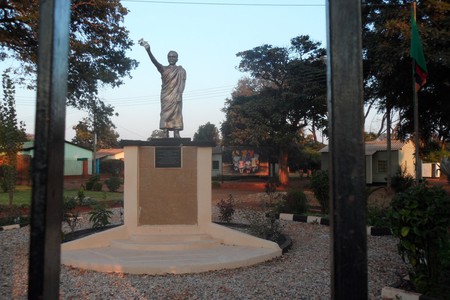 Every year, May 25 marks Africa Day, which celebrates the founding of the Organization of African Unity (OAU), which later became the African Union (AU) in 2001 during a conference in Lusaka, Zambia. It is fitting that Lusaka was chosen as the city to launch the AU, as it has played a major role in the southern African freedom struggle and liberation movement. In 2014, Matt Grollneck and Patience Chisanga created the Southern African Freedom Trail to highlight areas in Lusaka that supported southern African countries on the road to independence. Here are some places to visit.

The Freedom Statue is located around the corner from the Lusaka National Museum. The statue, which depicts a man breaking chains, was erected to symbolize Zambia breaking free of its colonial ties through independence (which the country obtained on October 24, 1964) . It also pays homage to freedom fighters who fought during the independence struggle. This is a good place to start a freedom tour of southern Africa, paired with a visit to the Lusaka National Museum, which has a section on the pre-independence struggle. Viewing the Freedom Statue is free, but the museum entrance fees are USD $5 for international adults and USD $3 for children.

Getting in the zone for #independence like the #freedomstatue #Lusaka #zambia

During apartheid in South Africa (a long period of racial segregation), leading members of the African National Congress (the main opposition political party to the racial government) were forced to go into exile to escape arrest. Many of them came to Lusaka where they were given offices to continue operations. The ANC Headquarters was located in backroom of a building in a sanitary lane between Cairo and Chachacha Road in the central business district, which is locally referred to as ‘town’. Unfortunately, there are no commemorative plaques marking this building as a heritage site, and the backroom is now a storeroom for a general goods store, while the front of the building has a sign for a police post.

Kenneth Kaunda, the first president of Zambia, was an instrumental figure in the liberation movements for South Africa, Zimbabwe, and neighboring countries. His residence from 1960–1962 is a national monument open to the public. Most of the original furniture is still in the house, and a well informed guide is on hand to share stories about the former president. The entrance fee to the monument for internationals is USD $15 per person. Chilenje House Number 394 is open to the public daily (except on Monday afternoons and Tuesdays), from 10 a.m.–1 p.m. and from 2 p.m.–5 p.m. While not on the official Southern African Freedom Trail list, it is a good place to visit to gain some insight into one of the most instrumental people who supported the liberation movement.

Chilenje House. Well worth a visit if you go to Lusaka. This little exhibition in the compound of Kenneth Kaunda's home before becoming President is a fascinating insight into Zambia, its democracy and its fight for freedom #zambia #lusaka #chilenjehouse #travel #travelphotography #photography #holiday #tourist #family #fun #history #africa #discoverzambia

The Charter Welfare Hall in Kamwala, which is located in the Central Business District, served as the offices for political organizations from South Africa, Zimbabwe, Namibia, Angola, and Mozambique. It was headed by Mukuka Edward Nkoloso, who is posthumously known as the founder of the Zambia Space program. Like the former ANC headquarters, it is does not have a plaque and serves as a general trading store.

Oliver Tambo, who served as President of South Africa’s African National Congress party, spent 23 years in exile in Lusaka. While he and his family were moved to different houses for safety reasons, he spent the longest time at a house in the Avondale suburb. In October 2017, the house was declared a national heritage site and was officially opened by the former president of South Africa, Jacob Zuma, and the current president of Zambia, Edgar Lungu. Tambo’s personal car and the one used by his security guards at the time are also at the premises. Oliver Tambo House is open to the public daily for free during business hours (8 a.m. to 5 p.m.).